BLAME IT ON RIO (some text hidden)

“It's a product with greater quality that's safer, better equipped, more media-savvy and nicer to drive.”

Think of Kia and you probably don't think of the company's Rio supermini, but the company's keen that you should. Jonathan Crouch and his family have been running the fourth generation model on our long term test fleet. Kia has come a long way with its engine technology in recent years. Proof of that comes with the company's latest T-GDI powerplants, one of which we've been getting to grips with in our latest long term test car. The model in question is the top version of the company's fourth generation Rio supermini. Is it good enough against the Fiestas and Polos of this world? Let's start with that engine. This three cylinder 998cc Turbo petrol unit is the headline act in the fourth generation Rio line-up, a powerplant that Kia has developed to take on the similar down-sized three-pot engines now available from most of the other brands in this segment. Like the most familiar of these, Ford's 1.0-litre EcoBoost powerplant, this Rio's 1.0 T-GDI unit comes with a choice of outputs - either 99bhp or 118bhp. Since both of these options develop the same 171Nm torque figure, it's no surprise to find that there's not much of a discernible performance difference between the two out on the road, though this Korean brand insists that the pokier variant improves the rest to 62mph time from 10.3s to 9.8s. We've stuck with the 99bhp model. Kia, like Ford, has chosen not to bless this three cylinder engine with a balancer shaft to improve its refinement. The rival Peugeot 208's similarly-configured three cylinder PureTech unit shows just what a difference this can make, dialling out the buzzy thruminess you get under hard acceleration in a 1.0-litre Rio. Still, as with a EcoBoost-powered Fiesta, the sensation isn't unpleasant and could even be said to add something to the character of this supermini. Having looked at the engine, let's talk about our experiences of the car it's fitted to. Design teams on three continents apparently worked on the smarter styling of this MK4 model and the body is stiffer and safer than the previous generation car. Plus there's the option of up-to-the-minute media connectivity, you get a quite a classy cabin and there's one of the largest luggage bays in the segment. All packaged up with an industry-leading seven-year warranty and pricing able to undercut most mainstream rivals. It all sounds quite promising doesn't it?

I certainly thought so when the car was delivered, initial impressions further improved by the discovery that the model in question featured top '3'-level trim. This includes niceties like 16-inch alloys, rain-sensing wipers, chrome window trim and rear privacy glass. The cabin has 'Black Faux Leather' upholstery and heat for the seats and steering wheel, plus helpful touches like auto wipers, an auto-dimming rear view mirror, a useful quick 'Defog System' and automatic air conditioning so you can pre-set a temperature. At this level in the range, the infotainment monitor is 7-inches in size and features touchscreen functionality, voice recognition, satellite navigation and 'TomTom'-powered 'Kia Connected Services' that allow you to connect in your smartphone via either Apple CarPlay or Android Auto. Other features in this set-up include a 'Live Traffic' feature that warns of you hold-ups ahead, speed camera alerts, weather forecasts and 'Local Search' system that'll help you find shops, restaurants and places of interest. Cold we ever have imagined a few years ago that a modern supermini would include all this? Over the weeks, my family and I have been appreciating the Rio's practicality. This generation design's 10mm of extra wheelbase certainly benefits legroom in the back. We do certainly struggle to fit three fully-sized folk across the rear bench, though that's an issue with any car of this size. Less forgiveable in my view is the fact that, rather meanly, Kia only provides a map pocket in the back of the lefthand seat. On the plus side, you don't really notice this fourth generation model's 15mm reduction in roof height, there are two Isofix child seat mounts for the two outer seats and it's possible to stash a 0.5-litre bottle in each of the doors. It's also worth pointing out that the Rio is the first car in this segment to offer a USB port not only at the front but also at the back, so enabling mobile devices to be charged from any seat. My teenage daughters greatly appreciate that. I'll also say a few words on bootspace, which has risen by 37-litres over the previous model. The tailgate is light to lift and reveals a 325-litre luggage area that's one of the very largest in the supermini segment. The load bay is well shaped too, with little intrusion either from the wheelarches or the suspension turrets, so we've had no problems getting things like suitcases and baby buggies in. Plus you get a wide opening and a low lip, though from that, there's quite as drop to the cargo floor. An adjustable boot floor would deal with that but Kia doesn't offer one. Beneath the base there's nothing more than a tyre mobility kit since this brand, like many of its contemporaries, irritatingly refuses to supply any sort of spare wheel as part of the standard spec. Smaller items can be stored in a storage cubby set into the left-side wall, while longer loads are dealt with by folding down one or both of the 60-40 split rear back rests. With these lowered, the area provided isn't quite flat but it is reasonably spacious with 980-litres of fresh air on offer. Another key Rio selling point we've had a chance to muse over is the much-trumpeted 7 year / 100,000 mile package. Most cars in this class come only with an unimpressive three year/60,000 deal. It's worth pointing out though, that when you read Kia's small print, you discover that you only actually get seven years of cover on the engine and gearbox: it's 100,000 miles and five years for everything else. Still, the overall package remains a great thing to be able to offer customers on the secondhand market, one reason why residual values of this car out-smart those of most direct rivals. Overall, our expectations were high when we took on this fourth generation Rio - and it's satisfied many of them. It's a product with greater quality that's safer, better equipped, more media-savvy and nicer to drive. In short, this Ro has come of age. In considering one, your initial expectation might be of a car with an appeal based mainly around its generous equipment and relatively modest asking price. Get up close and personal with this Kia though and it doesn't take long to appreciate that a lot more than that is on offer here.

Facts at a Glanceword count: 61 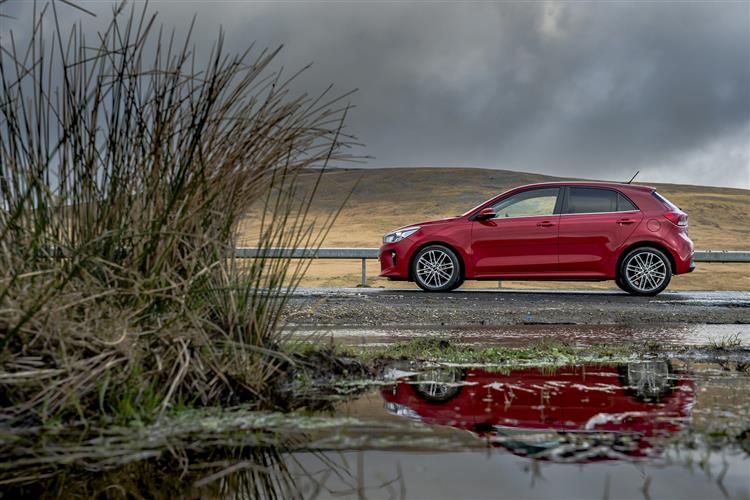