PARTNER FOR LIFE (some text hidden)

The e-Partner is Peugeot's eco-friendly small EV van for urban businesses looking to make the switch to full-battery power. It's a shared Stellantis Group design, but differs from its badge-engineered cousins with a completely different instrument binnacle and steering wheel design, which delivers a completely different feel at the wheel.

Peugeot is a brand with plenty of track record when it comes to EV propulsion, with an electric history going all the way back to the VLV model of 1941, several hundred of which found their way onto the streets of Paris. And in the modern era, the company was producing mainstream EVs long before brands like Renault and Nissan supposedly pioneered them. Over 3,500 battery-charged versions of the little 106 hatchback were sold between 1995 and 2003. It's taken the company some time to get into its stride with sales of EV vans though. We had to wait until 2021 (ten years after Renault bought us its first full-battery LCV) for electric versions of the marque's three mainstream LCVs to appear. Including this model, the e-Partner, which shares its design and drivetrain with three other Stellantis Group models (the Citroen e-Berlingo, the Vauxhall Combo Electric and the Fiat E-Doblo) and one Toyota commercial vehicle (the Proace City Electric). Unlike those close cousins though, this Peugeot is differentiated by more than just badges on the grille and steering wheel. As we're about to see.

The powertrain in use here is familiar from so many other small Stellantis Group EV models, based around a 50kWh battery powered by a front-mounted 136hp electric motor. What's different is the unique 'i-Cockpit' dashboard design with its smaller steering wheel, which encourages satisfying wrist-flick turns through town and makes parking easy. That steering is pretty light for open road use - and can get a little twitchy on faster routes. But the suspension feel is settled and well judged in town. There's a toggle switch for transmission settings and three drive modes - 'Eco', 'Normal' and 'Power'. You won't want to spend too long in 'Eco', unless you really are eeking out battery capacity because it reduces the powertrain's output to just 80bhp and also restricts the climate system to conserve power. Peugeot expects that you'll do most of your driving in the 'Normal' setting, which increases the motor output to 107bhp. The top 'Power' mode isn't really intended for sporty driving but for situations when you're carrying heavy loads. The powertrain also has a 'B' setting which increases the level of regenerative braking to a point where the van slows so much when you come off throttle that you'll very rarely need to use the brake, unless you're coming to a complete stop. You need that B setting to get anywhere near the official driving range, which is claimed at 171 miles. The rest to 62 mph sprint takes 11.7s and the top speed is restricted to just 81mph, so this EV won't be as good as its diesel counterpart for extended motorway runs. 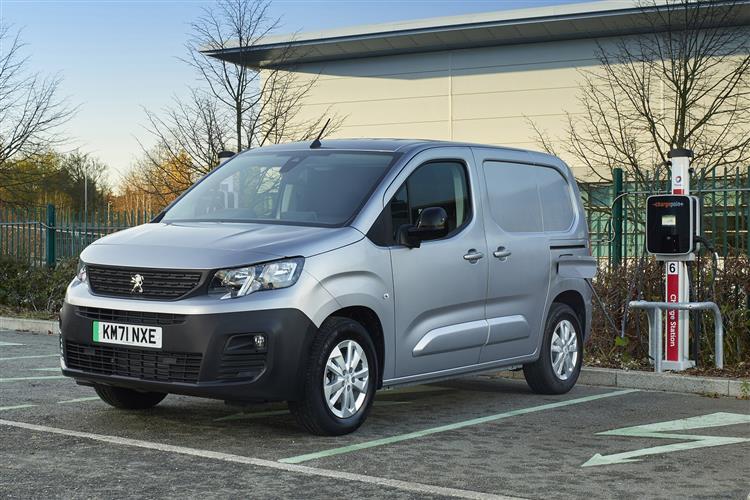