Bentley's Bentayga is one of the fastest, most luxurious and priciest exclusive large luxury SUVs out there. And now it's been improved with PHEV power and an Extended Wheelbase version. Jonathan Crouch takes a look.

Bentley was clever in spotting a gaping hole in the SUV market above the ubiquitous Range Rover and filling it with its Bentayga super-luxury SUV. This car has now been usefully updated and features a smarter look, a much improved interior and a longer Extended Wheelbase body shape. It's available with a petrol V8, with Plug-in hybrid power or even in wild W12 Speed guise. Either way, it can go properly off-road and packs some impressive statistics.

While some may be surprised to see Bentley producing a SUV vehicle, those who've kept an eye on the market have had plenty of time to get used to the idea. We had our first hint at what would become the Bentayga way back in 2012 with the EXP 9 F prototype. Here, elements like as the engine and overall size gave us a good indication of what was to come, though much has changed visually since the first controversial concept was shown. Taking on board criticisms from press and potential customers alike, Bentley have made sure they put the 'sport' into their SUV. All the available petrol engines aim to give best-in-class performance, while the styling looks very Bentley-orientated. Underneath, there's architecture shared with the MK2 model Audi Q7 and the third generation Porsche Cayenne. If the Q7 is anything to go by, that bodes very well indeed.

The first engine alternative is a 550PS 4.0-litre petrol V8. It makes 62mph from rest in just 4.4s on the way to a maximum of 180mph. Or, if you prioritise efficiency, there's a turbocharged 3.0-litre V6 petrol Plug-in hybrid model which has 449PS and an all-electric driving range of 25 miles. Go for the flagship petrol-engined W12 Speed model and you get a 6.0-litre 12 cylinder unit with 635PS and 900Nm of torque. Despite this variant's prodigious 2,422kg kerb weight, 62mph from rest takes just 3.9s - faster than a Porsche 911 Carrera. Flat out, you'll be doing 190mph, a figure way beyond any of its competitors. On all Bentaygas, to make sure that this big brute doesn't embarrass itself around corners, there's a fast acting 48v electric anti-roll bar system. Unlike conventional fixed anti-roll bars, this allows the Bentayga to remain supple over bumpy roads whilst still resisting roll around the twisties. It also ensures the big Bentley has plenty of ability off the beaten track even if most owners will probably never try it out. There's even the ability to raise and lower the car on its standard air suspension, perfect to make hooking up a horsebox or speedboat that much easier. The Extended Wheelbase model is the first Bentayga to get four wheel steering, supposed to improve the car's high-speed stability and low-speed manoevreability: sure enough, an Extended Wheelbase model's 11.8-metre turning circle is 7% tighter than that of a regular Bentayga. 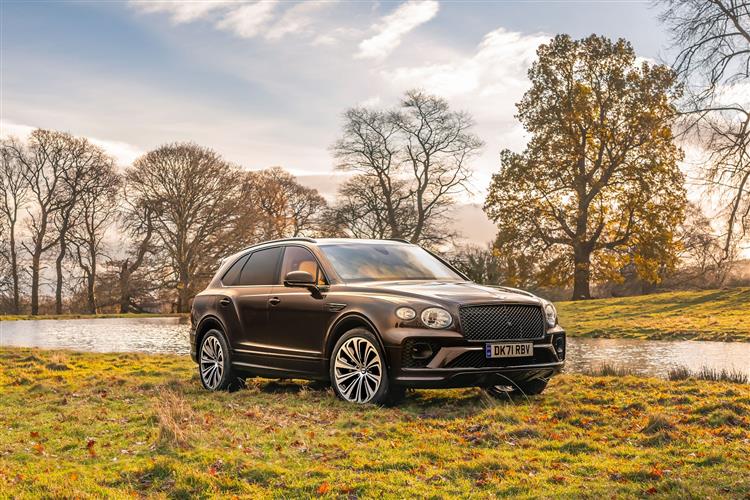