The Aston Martin Rapide S is powered by a fantastic 6.0-litre V12 powerplant and backs that up with the fitment of a ZF eight-speed automatic gearbox, carefully tuned suspension, big brakes and smart electronics. The result is a Grand Tourer par excellence - and one that allows you to bring a couple of rear-seated adults along for the ride.

Aston Martin's top brass, if they were allowed a moment of unfiltered candour, would probably admit they got the original Rapide wrong. Upon launch, the company claimed that it was a luxury limousine with sporting ability when required, but the truth of the matter was that there's just not enough space in the back seats for this car to measure up against luxury saloons. It was a sports car trying to be something it wasn't. And in this division, a sports car - whether it has two doors or four - needs proper power and presence. Aston better delivered with the restyled Rapide S in 2013 and the company subsequently went much further. With a whole host of engineering upgrades applied since the 'S' was originally launched, this model has really found its stride in this last AMR form. It's still small in the back, but now punches above its weight in other dynamic regards.

The legendary V12 now puts out 603PS and 630NM of torque, while a new quad exhaust ensures a raucous sound befitting of the AMR badge. This endows the big Aston the sort of pace to mix it with the real powerhouses of the division and more recent changes harness that power more effectively. In has come ZF's eight speed 8HP automatic gearbox, widely regarded as the best automatic transmission money can buy. Gearbox software changes make for a truly comprehensive selection of available driving features such as 'Drive' and 'Drive Sport' modes along with 'Paddle Shift' and 'Paddle Shift Sport' options for more engaging, sporting, shift control. The Rapide AMR also gets the latest Bosch Engine Management System, while a revised torque tube reduces transmission noise. The stability control has been retuned to suit the power deployment of the gearbox and the steering ECU has been tweaked to result in a more precise steering response. There are also uprated front brakes, a retuned brake booster and amended rear suspension bushes that are now 20 per cent stiffer than before. The Rapide AMR is still a serious performer, getting to 62mph in 4.4 seconds and it'll keep going to a breathtaking 203mph. 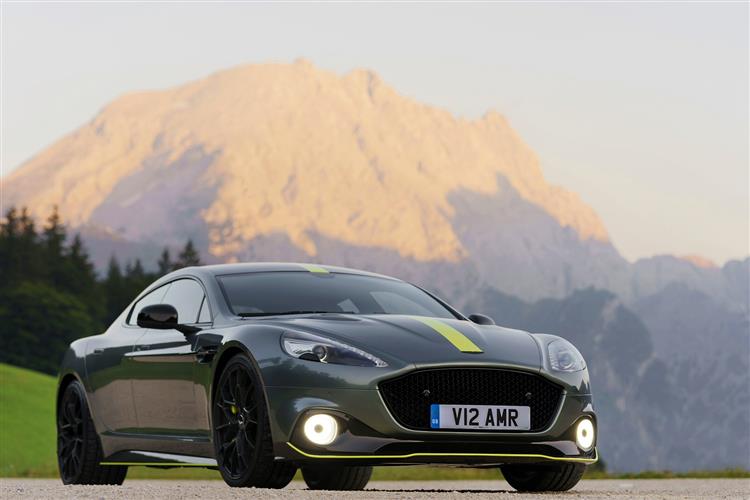