The improved BMW 3 Series Gran Turismo is a niche operator that aims to extend 3 Series appeal to families. Jonathan Crouch looks at the changes

In Gran Turismo form, BMW's 3 Series offers five-door hatchback versatility and much more rear seat space along with a more unique look and a slightly raised Crossover-style feel. The extra height and weight these changes bring create a different kind of drive but families probably won't mind. This, after all, is the most practical compact model the Munich maker has ever brought us. Let's check out this lightly improved version.

So, let me make sure I've understood this correctly. You like the idea of a BMW 3 Series saloon, but it's not big enough in the boot. You like the idea of a 3 Series Touring estate, but it isn't roomy enough for those in the rear. And you like the idea of the 3 Series-based X1 crossover model, but it's not sharp enough to drive. At least we've established you want a 3 Series - possibly this one, the 3 Series Gran Turismo. A 3 Series with a hatchback then, and an example of the breed that was first launched here back in the Summer of 2013 as a variant of this model line aiming to be fine for families, provided they can afford it. A BMW with the higher stance and commanding driving position of a small crossover - but one you can still enjoy driving. And a compact car that doesn't feel like one when you stretch out inside it. Such is the rationale behind this, Munich's smallest Gran Turismo model. A bit of a niche product? Yes, but one you could see appealing to plenty of people. Packaged up neatly here are attributes that BMW claim to have carefully pitched to suit the Qashqai crowd, the station wagon set and people for whom perfection is a compact executive saloon. A car for all seasons and all reasons then? Or a compromise best forgotten? Let's check out the subtly improved version of this car and find out.

So. Just how will this GT drive? It's hard to think of any car ever sold whose driving dynamics were improved by making it longer, higher and heavier. So there's reasonable scope to fear that the traditionally magnificent 3 Series driving dynamics may have been irrevocably corrupted here by a higher centre of gravity - you sit as high up as you would in BMW's X1 SUV - and a 145kg weight penalty over the saloon model. In the event, we don't think the men from Munich have done too badly. Crucially, at the wheel of this thing, you know still know you're driving a 3 Series: just a rather different one. On to engines, which as expected are exactly the same as those offered on conventional 3 Series models. Most customers will want the 2.0-litre diesel engine, offered in 150 and 190bhp states of tune in the respective 318d and 320d models on offer. Go for the 320d and you get an xDrive 4WD option. There's also a TwinPower Turbo six cylinder diesel engine, offered first in the 258bhp 330d, which also comes with the option of xDrive 4WD. There's also a 313bhp 335d xDrive variant at the top of the diesel range. If you're looking at petrol power, you'll find that again, the emphasis is on a single 2.0-litre engine offered in different guises. The 184bhp 320i manages 62mph from rest in 7.9s, while the new 252bhp 330i improves that to 6.1s and has to be artificially restrained at 155mph. I can't really see why you'd want to go faster than that in this car, but for those likely to be seduced by six cylinder power, there's a thirsty twin turbo 3.0-litre 340i model at the top of the range. With 326bhp on tap, this delivers the 62mph sprint in 5.1s. All these figures are based on setting up your car in its fastest form, selectable through the 'Sport' and 'Sport+' modes on the standard Drive Performance Control system you operate via this centre console button. This is able to tweak steering feel, throttle response, stability control intervention and, if you've an auto gearbox, gearshift changes based on your preference. 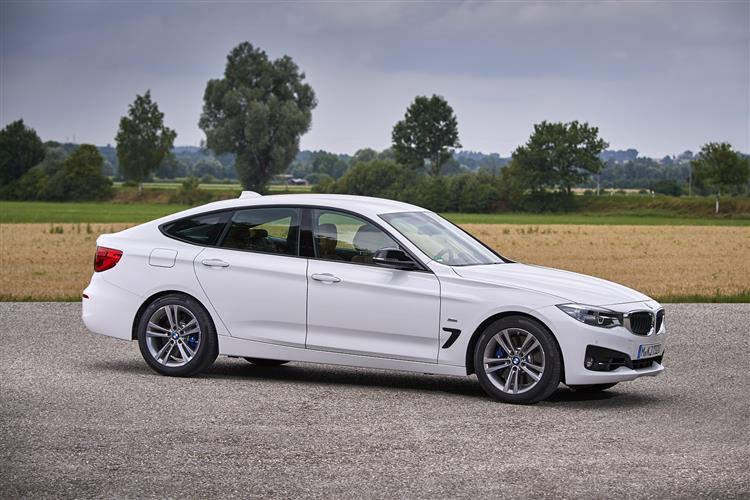