The BMW M240i is the sporting BMW coupe that flies under the radar and flies fast. Jonathan Crouch explains why.

This M240i replaces BMW's previous M235i porting model, a performance orientated coupe or convertible that now features a pokier yet more efficient six cylinder petrol engine. As before, this a cracker of a driver's car that packs a 340bhp punch, is available with a choice of transmissions, is priced keenly and looks the part too.

Back in 1985, BMW launched a car called the M3. There was nothing else quite like it, a racer for the road with four seats and everything Munich knew about motorsport technology plumbed into the lightweight engine beneath the bonnet. Driving it was a living, raw, involving experience - in a way that today's sharp-suited M3 can't quite duplicate, for all its extra power and sophistication. But here perhaps, is a BMW that can, the M240i. Yes, you read that right: we're ecommending the M240i here as an M3 alternative, not its pokier, pricier brother, the 410bhp M2 Competition. Don't get us wrong, we love the M2, but it's £53,000 asking price is high. For £11,000 less, this M240i goes virtually as fast and is almost as much fun.

As you may be aware, we're big fans of this model's BMW 1 Series counterpart, the M135i. And why wouldn't we be? It's hugely quick and entertaining, but BMW has gone one better with the M240i, though the 340bhp output of the improved six cylinder engine is the same. It's got a lower centre of gravity, the shock absorbers and springs are just those few degrees tauter. You'll feel the benefit when you get onto the sort of roller coaster of a back road that's all yumps, dips and successive rapid direction changes. It promises to be a better car for British roads, that's for sure. It's properly rapid too. Now only offered with eight speed automatic transmission, it'll get to 62mph in a mere 4.7 seconds. Slick as this paddleshift auto is, we miss not having the option of a manual stick shift. Press the Sport button and you'll immediately notice the steering weight up and the throttle response sharpen. Press the button once more and you'll find Sport+, which partially disengages the stability control and offers an even spikier throttle pedal. Expect to be mercilessly harassed by these cars on foreseeable UK track days. 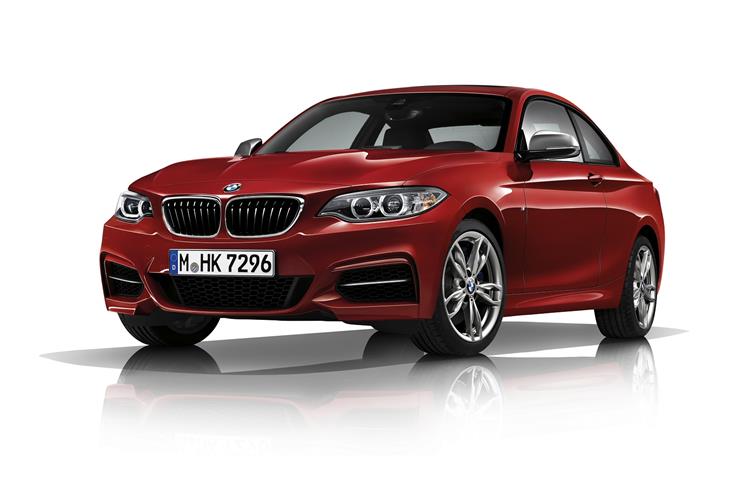