BMW's 2 Series coupe flies the flag for the rear wheel driven part of the 2 Series range. Jonathan Crouch drives it.

BMW coupes used to be all about compactness, lightness and rapid responses. The 2 Series coupe still answers the call and still features a classic rear-driven drive configuration. At the top of the line-up, the potent M2 variant remains but you don't need one of those to get really satisfying performance, thanks to revitalised 2.0-litre and 3.0-litre petrol models further down the range.

For as long as many of us care to remember, if you wanted a well-built coupe that was fun to drive, the path was well-worn one to your local BMW dealer, where you would be inserted into a 3 Series coupe and all was good with the world. Then things changed. The 3 Series grew up a bit and, like that friend of yours who was the life and soul of the party but these days just chases around after his kids making sure they don't spill their Fruit Shoots, lost a bit of its joie de vivre in the change to 4 Series guise. Fortunately, its madcap little brother, the 1 Series Coupe, was still bringing the fun. That car was replaced by the 2 Series Coupe in 2014, a car that's been significantly updated since. The key changes began late in 2015 when a flagship M2 high performance version was announced boasting 370bhp from its 3.0-litre six cylinder petrol powerplant. Then, in the early Summer of 2016, BMW announced an all-new 340bhp TwinPower 3.0-litre straight six petrol unit with 14bhp and 50Nm more grunt than its predecessor, this inserted beneath the bonnet of an M240i variant that replaced the previous M235i model. At the same time, a highly efficient new Baukasten 2.0-litre four-cylinder engine was added to the lesser 184bhp 220i model, while the 245bhp 228i derivative used the same unit in its evolution to 252bhp 230i status. In the early Summer of 2017, the Bavarian brand built on these changes with styling updates, both inside and out.

Rather encouragingly, BMW has given the 2 Series line-up a serious dose of engine in recent times. Even the entry level models aren't going to hang around. Drive on all models is directed to the back wheels and you get to choose between a six-speed manual gearbox or the quite brilliant eight-speed ZF automatic transmission. The range kicks off with a 1.5-litre 136hp three cylinder 218i petrol variant. Diesel options include the 150hp 218d and the 190hp 220d. The 220d diesel variant will be the most popular of the trio, serving up a tall stack of torque, with 380Nm available from just 1,750rpm. The key developments in recent years though, have centred around changes to the petrol line-up thanks to a redesigned Baukasten 2.0-litre four-cylinder engine and a revised 3.0-litre straight six. The base 220i 2.0-litre variant develops 184hp. Pride of place though, goes to the six cylinder petrol versions, the M240i these days offers 340hp, while the fearsome M2 Competition model fronts up with 410hp. Even the M240i variant is very quick indeed. If you specify it with the eight speed automatic transmission, it'll get to 62mph in a mere 4.6 seconds. Press the Sport button and you'll immediately notice the steering weight up and the throttle response sharpen. Press the button once more and you'll find Sport+, which partially disengages the stability control and offers an even spikier throttle pedal. The chassis balance is a good deal more benign than the occasionally malevolent old 1 Series Coupe and it's a better driver as a result. Expect to be mercilessly harassed by these cars on foreseeable UK track days. 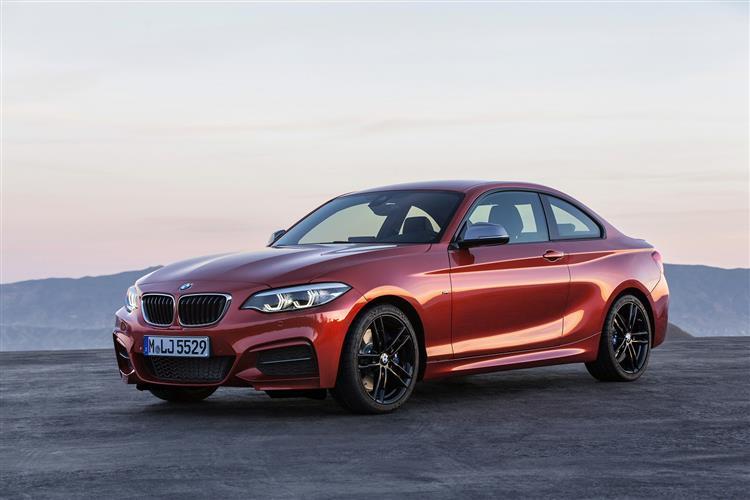