OPEN FOR ECONOMY (some text hidden)

The best-selling 4 BMW 4 Series Convertible model will be a diesel: this one in fact - the 420d. The engine under the bonnet may only have four cylinders but it develops a healthy 190bhp - and much more pulling power than the equivalent petrol version. It's even refined enough for owners to properly enjoy the roof-down vibes.

If you want a BMW 4 Series Convertible, it's likely to be because you like the idea of the kind of metal folding roof that rivals in this segment can't offer. This car has a smarter look in this improved form and most buyers like the 420d diesel version. Let's find out why.

The chassis of the 4 Series Convertible is based on that of the coupe but the springs, damping and axle characteristics have all been tailored for the open car. By modifying and fine-tuning variables such as the camber angle, the track and the roll centre, BMW has optimised agility and steering accuracy. Dynamic changes made to this improved model mean stiffer suspension and an upgraded steering set-up. These measures have resulted in a tangible improvement in both lateral and longitudinal handling properties, regardless of the load on board. The upshot is reduced roll, more neutral responses when driving at the limit, even greater straight-line stability and the wonderfully precise steering for which BMW is renowned. This applies to the standard suspension, as well as the M Sport suspension and Adaptive suspension. As before, Servotronic power steering is standard, with Variable Sports Steering offered as an option. A six-speed manual gearbox is fitted as standard with an eight-speed automatic available if you pay a little extra. With over 60% of buyers likely to favour a black pump BMW, we chose the 420d variant to try, a car with nearly the same output (190bhp) as its petrol-fuelled 420i counterpart but offering nearly 30% more torque, 380Nm making itself keenly felt from low revs. The most obvious stats don't immediately bear this out - both cars make 62mph from rest in just over 8s (only fractionally slower than their Coupe counterparts) on the way to a top speed of just under 150mph - but you really feel the diesel's extra torque out on the road. 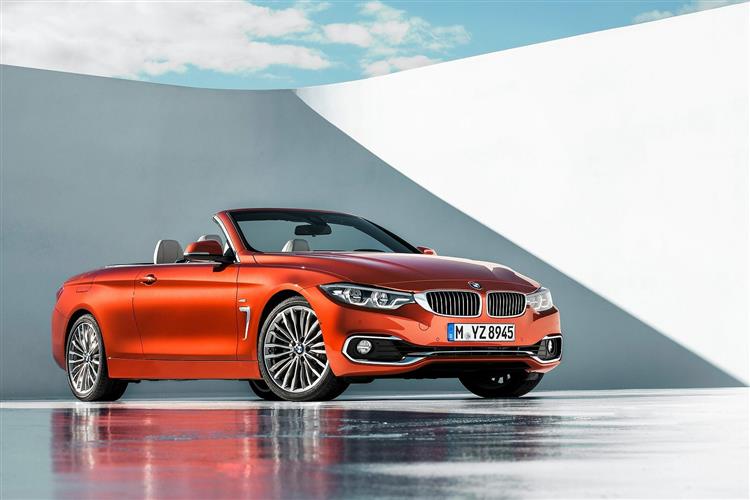