When BMW launched the sixth generation version of its top saloon, the 7 Series, it elevated itself back into contention at the top end of the luxury segment for large saloons. But much has happened since. This significantly revised model has had to get clever to keep up with the demands of the marketplace. With a frugal diesel and a plug-in hybrid available, it proves even luxury barges need a conscience these days.

BMW's 7 Series has been with us for well over four decades now, with the first generation car having gone on sale back in 1977. Initially available in one length with a six cylinder engine, a V12 was offered back in 1987 on the second generation car with a long wheel base model available too. As the Nineties became the Naughties, increased environmental concerns saw the introduction of diesels for the UK market as the list of available equipment grew along with the car's size and weight. For this updated sixth generation car, BMW knew they had to offer even more on-board gadgetry, connectivity and camera-driven safety kit - and of course that's exactly what we've got. Plus the styling's been sharpened and there's a much more competitive petrol Plug-in hybrid option.

The 7 Series has always sold itself as the driver's choice in luxury limos and that doesn't look to be changing any time soon. Even the most sensible (and slowest) six cylinder 730d pumps out 265hp, enough for 0-62mph in a scant 6.1 seconds (which falls to 5.8s if you go for optional xDrive 4WD). This is a far more popular choice than the similarly-price 340hp 740i petrol model. Other less popular engine options in the 7 Series range all come only with xDrive. There's the 320hp 740d diesel, the 530hp 750i petrol V8 and for real plutocrats, the 585hp M760Li V12. Should you want to be as green as possible - or just escape the London congestion charge - there's a 745e plug-in hybrid that can travel up to 36 miles on electric power alone. All models receive an eight speed automatic gearbox and air suspension for both front and rear axles that allows you to switch from soft to sporty and the touch of a button. As the ultimate party trick, you can even get out of the car and set it to park itself from your smart phone. Very James Bond. Optional Integral Active Steering allows rear wheel steering to tighten the turning circle and sharpen cornering response. And on most models you can also specify Active Chassis Control to reduce body roll. 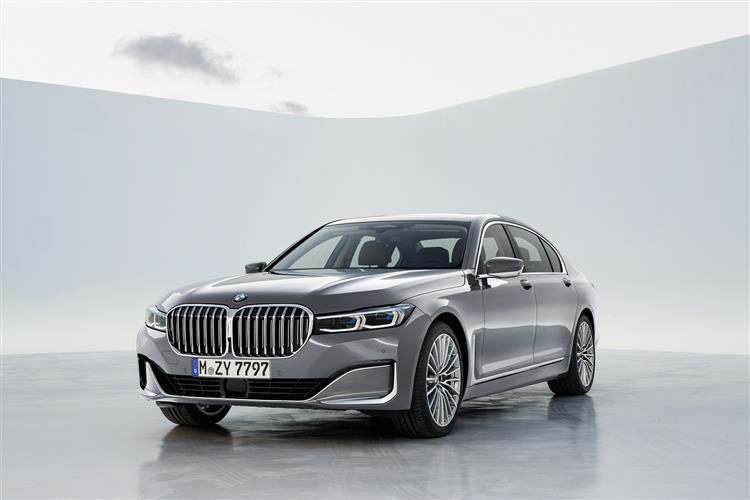