BACK TO BASICS (some text hidden)

BMW harks back to historic heroes with the M2 Competition. Jonathan Crouch takes a look.

BMW's M2 is descended from a distinguished line of small, high performance two-door saloons. A stylish alternative to the market's highest-performing hot-hatches, the M2 aims to be both a luxury coupe on the road and an accomplished racer on track. Especially in this 410hp 'Competition'-spec form.

The performance model that most stands out in BMW's history is the M3. In its original mid-1980s form, this car was fun, ferociously quick and relatively understated, while proving to be highly competitive on track. Over the years though, as this model line grew larger, safer, more refined and more expensive, it began to lose some of the character that made those early cars so special. When, in 2010, BMW's entry level model, the 1-series coupe, was given a light sprinkling of M enhancements, the company seemed to be on the verge of launching a worthy 'back to basics' successor to earlier M3s. That 1 series M Coupe was well received and this car, the M2, launched in 2015, was its direct successor, now offered here only in uprated 410hp 'Competition' form. In many ways, it's what an M3 really should be. Will it take its place in BMW's heritage?

Putting a turbocharged 3.0-litre six cylinder engine into a small rear wheel drive coupe will always grab a driver's attention. The engine is basically the same as that used in the lesser 340hp M240i model but the 410bhp 'Competition' state of tune here is bespoke to the M2 and delivers monumental performance, charging to 62mph in just 4.4 seconds in manual form (0.4s faster than the M240i). That challenges the Porsche 911. There's a choice of a six-speed manual gearbox or a seven-speed M DCT paddleshift auto that gets to 62mph 0.2s quicker. 'M,' essentially, stands for 'Motorsport', so the M2 has to be capable of performing on track and to enable that, some ruthless weight shedding has had to take place. Many steel components, particularly in the steering assembly and chassis, have been replaced with aluminium parts in an attempt to make the M2 much more responsive. Boy racers will be delighted to hear that there is even a 'Smokey Burnout' function when some gratuitous show-boating is required. M Sport brakes, an M Sport exhaust system and M specific suspension with the brand's Active M differential all come included with 'Competition' spec. If you want to go even faster, there's a rare limited edition M2 CS variant available with 450hp. 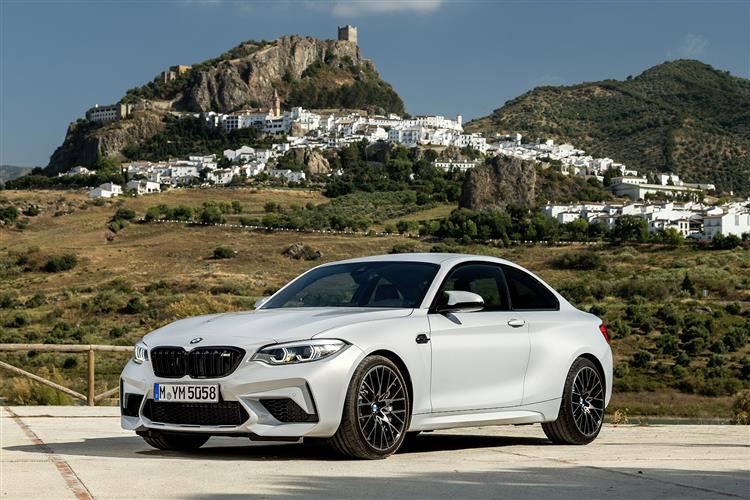