BENCHMARK THIS (some text hidden)

This improved version of the seventh generation BMW 5 Series claims to be significantly smarter, more sophisticated and more efficient than ever before. Plenty to worry rivals then. Jonathan Crouch takes a look at what's on offer.

BMW's 'G30' 7th generation 5 series has changed - but not beyond recognition. The looks get sharpened, engine electrification now proliferates and a couple of extra powerplant variants join the range. Otherwise, the line-up of saloon and Touring models continues with much the same polished, Teutonic and mildly dynamic appeal as before.

How do you right a bestseller? This refreshed version of the 7th generation 5 series is BMW's answer to that question when it comes to the Munich maker's uber-successful offering in the full-executive segment. Over 600,000 examples of this 'G30' series '5' have been sold since its original launch in 2016 but changes were needed, following key enhancements to its two most significant rivals. An all-new version of the Audi A6 was launched in 2018 and Mercedes substantially updated its 10th generation E-class in early 2020. In terms of what's new here, you'll immediately spot the new 3 series-style nose. But arguably what's more important is what now lies beneath the bonnet. 48V mild hybrid tech has now been introduced to all the mainstream engines, plus there's a second, more powerful plug-in hybrid option. And a new V8 M Performance model, along with a re-fettled M5 too. Plus updated media connectivity as part of a lightly-smartened cabin. Plenty to talk about them.

Thanks to a reduction in weight of about 100kg, this 7th generation 5 Series proved to be a little sharper to drive than its immediate predecessor and still feels a little more agile than its direct Audi and Mercedes rivals. Especially if you add in options like 4-wheel steering and adaptive damping. The kind of full air suspension set-up you can have on a rival Mercedes E-Class is still lacking, though there's an air suspended rear axle on the Touring estate variant. You'll want to know about engines which continue to work via an 8-speed ZF auto gearbox. All the mainstream four cylinder and six cylinder powerplants now get the Munich maker's latest 48V mild hybrid technology. Most 5 series buyers still want a diesel - there are three options again available. Things kick off with the four-cylinder 188hp 520d, which sits below a couple of six cylinder variants, the 281hp 530d and the 335hp 540d xDrive. The 520d and 530d can be had with either standard rear wheel drive or extra cost xDrive 4WD. BMW expects petrol power to enjoy a greater take-up with this facelifted model. The mainstream part of the range uses a 2.0-litre four-cylinder turbo unit, things kicking off with a 181hp 520i. Above the 520i, xDrive 4WD is either optional or mandatory. That 2.0-litre four-cylinder unit features in more powerful 248hp form in the 530i. And in the plug-in hybrid 530e, which offers up to 288hp. If you think a 5 Series really needs a six cylinder engine and you want petrol power, the conventional option is the 329hp 540i. A 248hp version of the 540i's same 3.0-litre petrol 'six' is paired to a 107hp electric motor in a new more powerful plug-in hybrid derivative, the 545e xDrive. Finally, there are a couple of potent V8 variants, starting with a freshly-added M Performance version, the 550i xDrive, which offers 523hp from its 4.4-litre powerplant and bridges the gap to the top M5 Competition super saloon. The M5 Competition uses the same V8 engine in 625hp form. 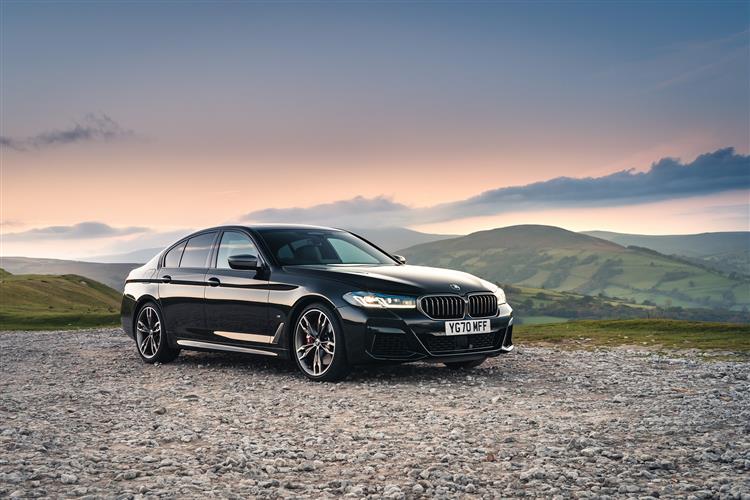