BMW's 6 Series Gran Turismo brings SUV, large estate and luxury saloon qualities to a package that offers executives something very different. There's nothing quite like it. Jonathan Crouch reports.

The BMW 6 Series Gran Turismo is a uniquely styled five-door executive car that certainly won't be for everybody but it is pretty unique. And a great deal more appealing than this model was in its previous 5 Series Gran Turismo guise thanks to smartened styling, improved efficiency, an updated cabin and extra boot space. Choose it over a 5 Series Touring estate if you want more generous rear legroom and extra exclusivity.

You might think that with its 7 Series luxury saloon, its huge 5 Series Touring executive estate and its X5 luxury 4x4, BMW had pretty much covered all the bases for well-heeled business-minded family buyers. Not a bit of it. The Bavarian maker also thinks there's room in the market for a model that combines the best bits of all these cars: long distance comfort, practical carrying space and purposeful elevated SUV style. It's called the 6 Series Gran Turismo. This car is a development of the old 5 Series Gran Turismo model that the Bavarian maker launched back in 2009 and like its predecessor, it aims to combine sports car looks with executive saloon space. This time round, the styling is longer and sleeker and there's more interior space and lighter weight. The xDrive 4WD system is standard on most models too. So how does it all stack up?

For our market, three engines are being offered - two petrol units and one diesel. Most buyers will choose the single diesel model, a 630d variant powered by a 263bhp 3.0-litre six-cylinder engine. The petrol options are the 630i and 640i derivatives, which use a 255bhp 2.0-litre four-cylinder turbo and more potent 335bhp 3.0-litre six-cylinder turbo respectively. The engines all feature the usual BMW TwinPower Turbo technology and all variants have to have an eight-speed Steptronic auto transmission with paddles as standard. The 2.0-litre four-cylinder petrol unit in the 630i Gran Turismo manages zero to 62mph in 6.3 seconds. The 3.0-litre six-cylinder in-line petrol engine in the 640i xDrive variant improves the sprint figure to 5.3 seconds. The 630d version accelerates from zero to 62mph in 6.1 seconds. BMW's xDrive four-wheel-drive system is available on all but the entry-level petrol model. All versions feature self-levelling air-suspension on the rear axle. Two-axle air-suspension plus adaptive dampers are available as an option. As usual with BMWs, there's a 'Drive Performance Control' system to adjust the car's settings according to the driving conditions. As well as an efficiency-minded 'ECO PRO' mode, the set-up has 'COMFORT' and 'SPORT' settings, while customers who choose the 'Adaptive' and 'Executive Drive' options that include adaptive damping add 'COMFORT+' and 'ADAPTIVE' modes to the Drive Performance Control selection. 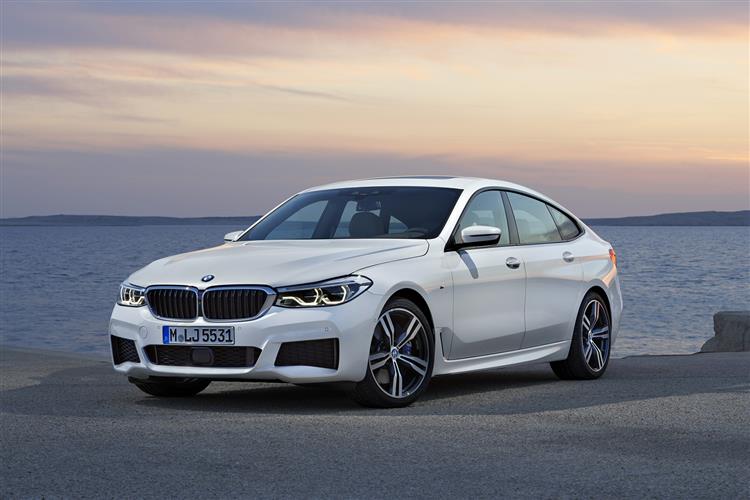