BMW's M5 is the yardstick against which all serious performance saloons are judged, a car that's now in its sixth 'F90' generation and is only these days offered in top 625hp 'Competition' guise. It's recently been lightly updated, both inside and out. And as before, features a throaty 4.,4-litre V8 beneath the bonnet. There's xDrive 4WD, a trick rear diff gets the power to the tarmac, there's a track-style paddleshift auto gearbox and you get a myriad of drive mode settings to make this the most configurable performance car on the planet. Munich, it seems, has thought of almost everything.

BMW invented the executive super saloon with their M5 and though Audi's RS6 and AMG versions of Mercedes' E-Class have offered stiff competition in recent years, for many, this remains the definitive motorsport-bred business blaster. Time to rate the improved take on this 'F90'-series sixth generation version. From the outset in 1984, this model line was all about straight six power, normal aspiration and rear wheel drive but over the years, all these original staples have evolved as BMW seeks to reinterpret what the ultimate super saloon should be. A V8 engine arrived for the 'E39' third generation version in 1998. And turbocharging was adopted for this current car's fifth generation 'F10'-series predecessor in 2011. With this 'F90'-series car, we at last got 4WD too, though BMW reassures us that you can turn it off if you want and slide the back around. Which is nice... The main reason all-wheel drive traction is needed lies with the news that engine output from the twin turbo V8 unit that's carried over here has now reached 625hp in this 'Competition' guise. We're here to put it all to the test - and enjoy a fresh chapter in the history of one of our favourite high performance standard-setters.

We've tested every generation of M5 over the last thirty five years - but nothing quite like this sixth 'F90'-series incarnation. When it first arrived in 2018, the big news was the addition of 4WD to the package, an M xDrive system incorporated in such a way as to only activate additional drive to the front wheels in extremis, so keeping this BMW's essentially rear-driven character. There's a selectable track-orientated 2WD-only driving mode if you really want to throw the back around. Power is provided by a revised version of the 4.4-litre V8 unit used by the previous 'F10'-series model. In standard form, thanks to a sharp set of twin turbos, a sophisticated cooling system, a free flowing exhaust and high injection pressures, it puts out 750Nm of torque and 625hp - 65hp more than the previous pre-2018-era generation model for reference. That's in this uprated 'Competition' form, this now being the only variant now on offer. Power's transmitted via a torque-converter 8-speed 'M Steptronic' auto transmission. The V8 powerplant doesn't quite have the thundery bluster of the AMG V8 used in this M5's Mercedes E 63 arch-rival, even if the optional M Sport-tuned tail pipes are fitted. But its output is now certainly a match for that Stuttgart saloon, as are the performance figures, which see 62mph from rest taking just 3.3s in this Competition model en route to a top speed that when de-restricted will take you to 190mph. That's Ferrari-fast. But of course a two-tonne super saloon isn't going to change direction with the agility of that Maranello model. Or so you'd think. Actually, the M5 does an astonishingly good job of disguising all that bulk, aided hugely by the Active M differential that varies torque across the M-specific back axle. A selectable 'M Dynamic Mode' holds the key to controlled drifts and entertaining handling, and offers another three modes (with DSC deactivated) which have been optimised for track driving: as well as 4WD and 4WD Sport, drivers also have the choice of 2WD mode (also automatically disabling DSC) for the traditional BMW M5 rear-wheel drive experience. BMW has tweaked the suspension dampers and the M Performance chassis for even sharper handling and there are bespoke engine mounts and special M Compound brakes. You'll need them. 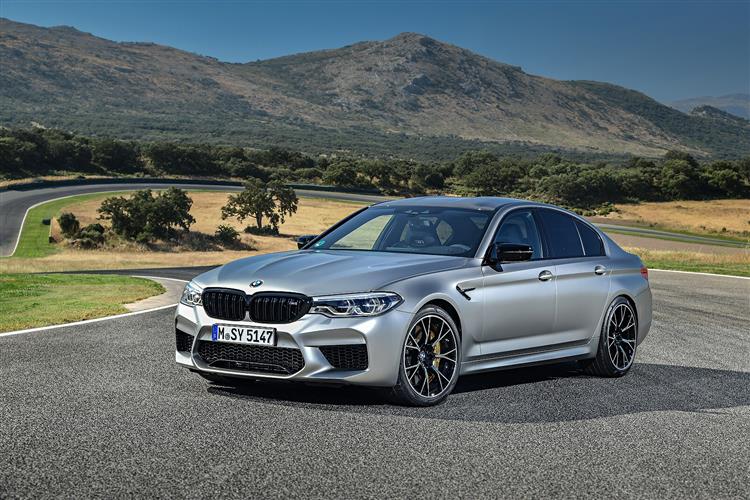