The BMW i8 Roadster re-defines the art of open-topped sports car design. Jonathan Crouch drives it.

The BMW i8 re-defines the art of sports car design - both technologically and aesthetically in this Roadster guise. It may not be the ultimate contender of its kind to drive but it could well be the ultimate model of this type to own. This is, after all, a plug-in petrol/electric hybrid super sports car that runs silently on its battery in the morning commute, yet can transform itself into a high performance GT when you're in the mood.

You're looking at the future of open-topped sports cars, one that's light, strong, very fast and more than able to justify its position on the planet. Welcome to BMW's revolutionary i8 Roadster. Originally, BMW designed the i8 as a Coupe, but showed a Spyder concept version at the Beijing Motorshow in 2012 to see if there would be enough customer interest in an open-topped version. There was and when the design team removed the roof of a fixed-top model and found the carbon fibre chassis easily stiff enough to support a convertible format, the Munich maker gave the green light for production. Following which the i8 Roadster was launched in the Spring of 2018. It arrived on the market at the same time as the i8 Coupe was receiving a significant update and the technical changes, shared here, have been enough to further distance this i8 from its conventional super sports car rivals. In this Roadster form, you get an extra element of exotic desirability.

The i8 Roadster is something quite new: a super sports car that promises you the thrill of high performance open-topped motoring, but with near silent aural accompaniment from its electrically-assisted powertrain. That's the case when you drive this car in one of its 'eDrive' modes anyway, which work at speeds of up to 75mph and deliver top-down progress that amplifies the sights, sounds and smells of the world around you. As in the Coupe version of this model, the electric motor's sited up-front, drawing charge from a high voltage lithium-ion battery that powers the front wheels through a dedicated two-speed auto gearbox. This set-up works in concert with a tiny MINI-sourced 1.5-litre three cylinder petrol powerplant sited in a mid-engined format behind the back seats, simultaneously driving the rear wheels via another auto gearbox, this a more conventional one with 6-speeds. This improved i8 is more efficient, but you won't be buying this BMW primarily for that. It's a super sports car after all. Which means that as soon as possible, you're going to want to click out of the standard 'Comfort' and 'ECO PRO' driving modes and snick the auto gear lever to its left hand 'Sport' setting to see what this i8 can do. As the dashboard graphics flash orange, the engine will fire up if it hasn't already, chiming in with power to the rear wheels that supplants the torque already being developed by the electric motor for those at the front. The result is 4WD traction and some serious pep, 62mph from rest achievable in just 4.6s on the way to a maximum speed that must be reined in at 155mph. The ride is rather firm, despite the standard variable damping system, and the steering could use a touch more feedback, so you don't get the trackday feel of a rival 911 or AMG-GT. In compensation though, this BMW is arguably a better highway cruiser. And on twisting secondaries, if you lower your corner entry speed a fraction, you can apply power deliciously early through the turn. That delivers an immensely satisfying feel of instant electric motor thrust which, combined with four wheel traction, makes this BMW an exceptionally quick point-to-point B road blaster. 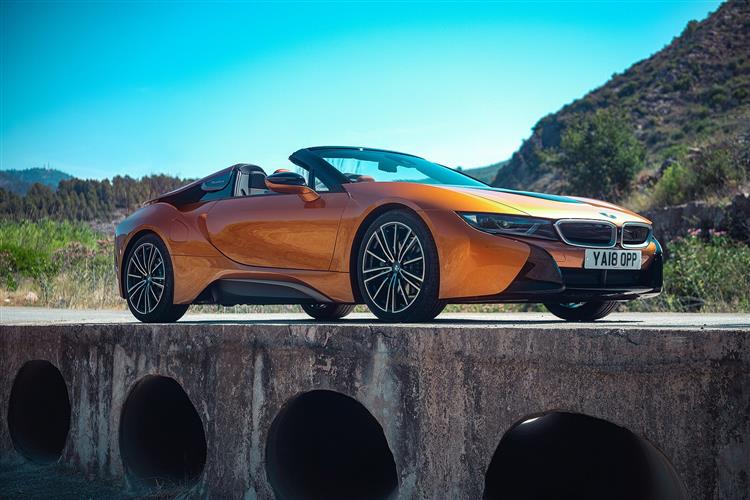