The 330e Plug-in hybrid is the technological flagship of BMW's current 3 Series line-up. Now, it has wider appeal. Jonathan Crouch takes a look.

With BMW's plug-in hybrid petrol/electric 330e model, the conventional 320i variant's 184hp 2.0-litre petrol engine has been matched with an electric motor and a larger battery to create quite a package. Now you can have it with the estate body style and xDrive AWD too.

Not everyone wanting futuristic engine technology wants their car to also look futuristic. To look like BMW's i3 for instance. If you're buying from this Bavarian brand and want a petrol/electric powerplant, the 330e Plug-in hybrid offers a more subtle way to go. You get 37.3 miles of all-electric driving range when the car's charged up, which enables the creation of some impressive overall stats - up to 217.3mpg on the WLTP combined cycle and as little as 30g/km of WLTP-rated CO2. Those figures fall only fractionally with this Touring estate body style. Take some time to understand BMW's thinking here and it's hard not to be impressed.

This current 330e Plug-in hybrid took a big step forward over its predecessor, the main difference between the two cars found when it comes to measurement of all-electric driving range. This was rated at only 21 miles in the previous generation 3 Series plug-in but in this current 330e design, BMW clams up to 37 miles of zero emissions motoring from a fully-charged set of batteries. In other words, if you've a pretty typical daily commute, you might never have to fuel up this car to complete it. As you might expect, this kind of cleverness comes courtesy of a very advanced powerplant indeed, in this case a combination of the 184bhp 2.0-litre petrol unit from the 320i mated to an electric motor incorporating an 'XtraBoost' function. This can increase power to as much as 293hp, reducing the 62mph sprint time to six seconds exactly. The hybrid system's extra weight drops maximum speed slightly over that of the ordinary 320i, but it's still rated at 143mph. The brand's xDrive 4WD system is now available on this variant. 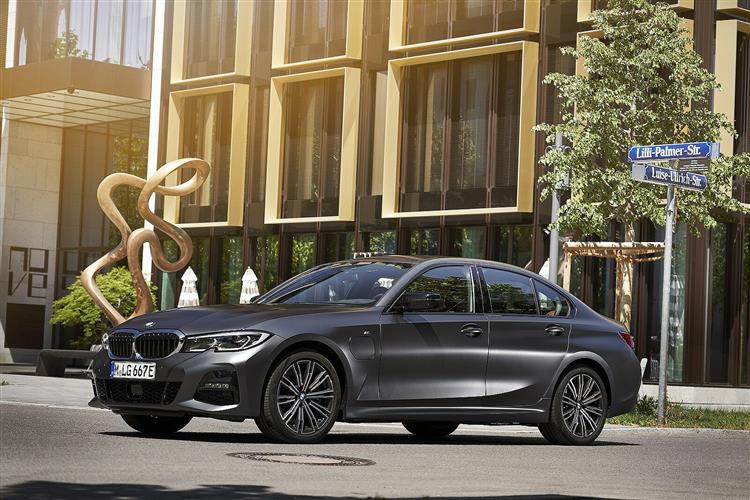