BMW thinks this M8 Competition model is the closest it's yet got to the all-conquering Porsche 911. But is it? Jonathan Crouch gets behind the wheel.

BMW's M division certainly knows how to build driver-focused sports cars. This though, is something slightly different - a larger, more luxurious driver-focused GT. Offered in Coupe, four-door Gran Coupe or, as in this case, Convertible form, it delivers masterful performance - on a major scale. If you must have the ultimate BMW, then this may well be it. It's tempting to think of this model as nothing more than an M5 saloon in a more sporting suit. After all, it shares the same 625hp V8 twin-turbo engine, much of the same M Division technology and, as a result, pretty much the same performance figures. BMW though, thinks differently, pointing out that this car has a stiffer set-up, a shorter wheelbase body and cleaves a cleaner path through the air. Whatever your perspective though, this M8 Competition model, available in Coupe, Gran Coupe or Convertible form, looks to be a devastatingly effective piece of high performance engineering. The kind of car in which, for instance, you might drive to the Alps - but take in the Nurburgring on the way. Developed in parallel with the M8 GTE endurance racing car, it's a force to be reckoned with.

Imagine the mighty BMW M5 super saloon as a two-door GT sportscar with a shorter wheelbase for extra agility and a stiffened set-up for even sharper responses. That's essentially what we've got here with this M8 Competition model. The 'Competition' tag refers to this car's stiffer engine mountings which aim to facilitate sharper turn-in. And the wheelbase has been reduced by a significant 201mm. Otherwise, everything's much as you'd find in an M5 - which is good. So there's the same 625hp twin turbo V8 mated to a more direct-shifting DCT M Steptronic paddleshift gearbox (rather than the lazier Speedtronic auto you get on a lesser M850i). Plus there's 4WD, an electronically-governed mechanical limited slip differential and a set of grippy 20-inch Michelin tyres, the rears slightly wider than the fronts. In addition, as with the M5, there are lots and lots of mode settings which you can programme in and customise via two buttons on the centre stack marked 'M Mode' and 'Set-Up'. Once you've arrived at your favourite two combinations of throttle response, gearshift timing, stability programming and damping feedback, you can save them via two red anodised levers on the steering wheel marked 'M1' and 'M2' - one perhaps for country roads, the other maybe for fast-flowing major routes. As with the M5, you can also select an 'M-Dynamic' setting that turns all the safety systems off and limits the drivetrain to rear wheel drive. It's a mode we'd advise you to use only for tyre-smoking circuit drifting. In any mode, this M8 is very, very fast of course - 62mph is dispatched in just 3.2s and if it weren't for the 155mph speed limiter, 180-190mph would no doubt be possible. 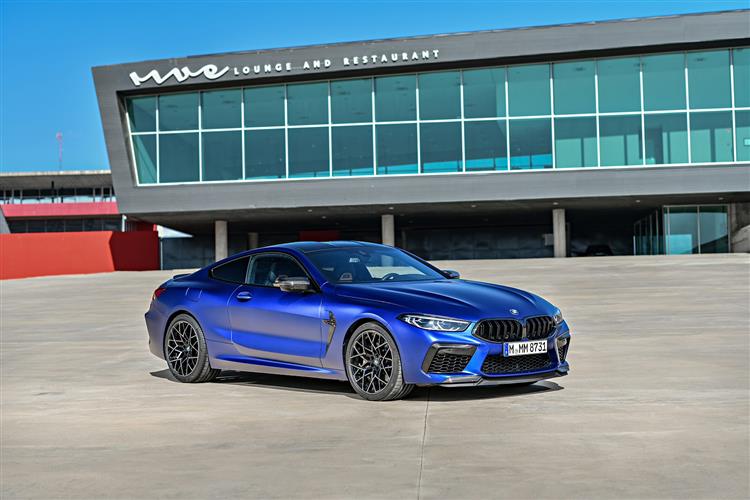