The BMW 3 Series Touring is back for those who don't pack light. Jonathan Crouch takes a look.

The sophisticated sixth generation 'G20' generation version of BMW's 3 Series Touring holds no great surprises to those who understand the narrative of this model. It's not the most accomplished load lugger in its class but it's the best drive and offers the most efficiency. That'll be enough to clinch the deal for most who just hanker after a 3 Series with a bit more versatility.

Conventional wisdom dictates that estate cars are designed for people who can't fit all the paraphernalia of modern life inside a conventional saloon or hatchback model. You'd certainly imagine that an estate would require a lot more space than the saloon on which it is based in order to justify its own existence but, particularly in the compact executive sector where BMW's 3 Series Touring competes, it isn't always that straightforward. It might be a surprise for some people to learn that many mid-sized executive estate cars are only fractionally roomier than their saloon equivalents - and some even have less space out back. Estate buyers in this sector are typically also asked to pay around £1,300 more for the privilege. That's extra money for extra space. How much extra space? With the rear seats in place just 20 litres over the saloon. You don't, in other words, buy this car for its luggage cramming talents. You buy it because you want the capability in hand and also because it's a little more 'lifestyle' and a little less 'field sales' than the standard 3 Series saloon.

The well-versed themes of the 3 Series are present and correct in this sixth generation Touring model. It's still rear wheel drive of course - though xDrive 4WD is, as before, as option. Upgraded four-cylinder engines from BMW's Efficient Dynamics family are used across the powerplant range, which kicks off with the 156hp 318i and the 184hp 320i. The 320i's same engine's is also used in the 330e plug-in hybrid model. The other mainstream petrol engine available is the 258hp unit in the 330i. If you want six cylinders, you'll need the 374hp engine of the rare M340i. Diesel drivers can start their perusals with the 150hp 318d, before going on to consider the 190hp 320d derivative that most choose. This mid-range diesel model generates 400Nm of torque which enables a 0-62mph sprint time of 7.5s (or just 7.1s for the auto). Next in the diesel line-up is the 265hp 330d and at the top of the diesel range is the 347hp M340d. The brand's xDrive 4WD system is optional on the 320i, the 320d and the 330d. And you have to have it on the M340i and the M340d. A new generation six-speed manual gearbox is available - though only on the base 318d diesel variant. Otherwise, your 3 Series will come with eight-speed Steptronic auto transmission. The handling promises to be even sharper thanks to a wider track, and a chassis that's up to 50% stiffer in some areas and which features special lift-related dampers. A 55kg weight reduction this time round also helps. Adaptive M suspension can be specified on 'M Sport' models. And 330i and 330d buyers will be offered an M Sport differential for the rear axle which helps to enhance traction, agility and cornering. 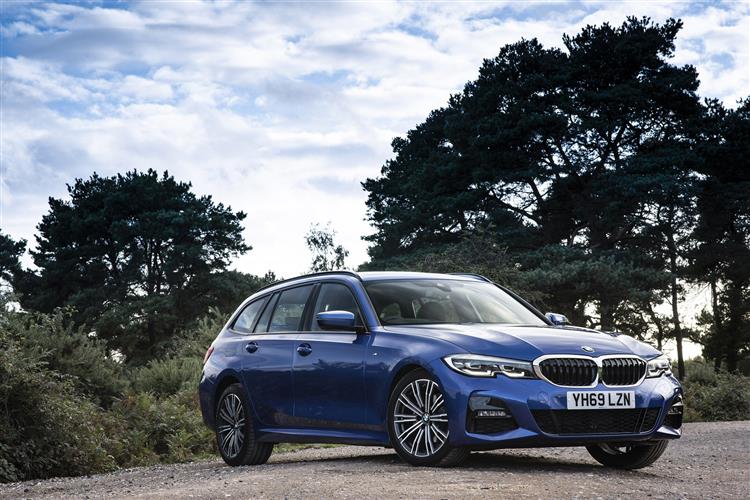