The original M6 was one of the best loved coupes BMW ever built. The car introduced in 2005 was hugely impressive but, at the same time, a little less endearing. If you don't mind sacrificing a little personality for a while lot of capability, there's very little that can get close to the M6. It demands respect. Here's how to pick up a used example that'll still do the business.

The M6 had a lot to live up to. Many of us fondly remember its shark-nosed predecessor. Although it stayed around a little longer than perhaps it should have done, this was a car that oozed charisma, with classic old shots of M6 Touring Cars making it one of the coolest cars the late seventies produced. That old M6 was a formidable thing for its day, packing 286bhp from its 3.5-litre V6, enough to propel it to 60mph in 6.2 seconds. From there, it would run on to a top speed of 149mph. The 16mpg average fuel consumption wasn't anything special but when a car looked as good as the M6, who cared? The latest generation car shifts the goalposts to another dimension. Despite the massive increase in power, it's more economical, safer, bigger and cleaner than its predecessor. In real terms it's not even any more expensive. It's hard to escape the realisation that we've never had it so good. Although the old M6 was often thought of as a less pure sports car than the equivalent M5, this is no longer the case. Whereas the original M6 was, in effect, a 7 Series coupe, the latest version takes a contemporary 5 Series chassis and as such offers a stiffer, lighter and more compact body. Arriving in UK dealers in November 2005, the M6 was significantly more expensive than the multi-talented M5, which capped sales somewhat. Nevertheless, compared with cars like the Bentley Continental GT, the Ferrari 575 and the Aston Martin DB9, you'd have to say the M6 was a bargain. The hard top model was joined by a convertible in September 2006.

What You Getword count: 330

The M6 is a technological tour de force. Few companies have succeeded in translating much Formula One experience and technology to the road but clear parallels can be drawn between BMW's V10 and the engine that once powered the Williams F1 cars. Gerhard Richter, BMW M division's development chief nails the difference between the M6 and its current rivals. "We are coming from motorsport. Look at our engines; they are high specific output, high revving, normally aspirated. In this combination we are alone. " You have to agree Herr Richter has a point. Power is transmitted to the rear wheels via a seven-speed sequential gearbox. The Drivelogic system changes gears around 20 per cent faster than the somewhat unsatisfying earlier iteration of the SMG gearbox as fitted to the old M3. Eleven different change patterns are offered, six of which allow the drive to alter the speed and response characteristics of the gearchange in manual mode and five that govern the rules of the automatic mode. The sixth pattern in manual is reserved for the Launch Control function, giving the likes of you and I the opportunity to replicate BMW test drivers' 0-60 times. In theory at least. There's quite a decent amount of space up front and the boot is generous as well, although rear seat space is predictable cramped. The roof is a big talking point of the M6 Coupe, finished in carbon fibre, but the Convertible version gets a conventional fabric ragtop capable of disappearing from view in less than 20 seconds. The best part about the hood is that it's operable with the car moving at speeds of up to 20mph. Much quicker than that and aerodynamics would plant your hood onto the windscreen of the car behind but it's nevertheless very impressive to be able to drop the hood while on the move. Six hydraulic cylinders guide the ragtop into place without significantly compromising luggage space - a major issue with folding hard topped cars. 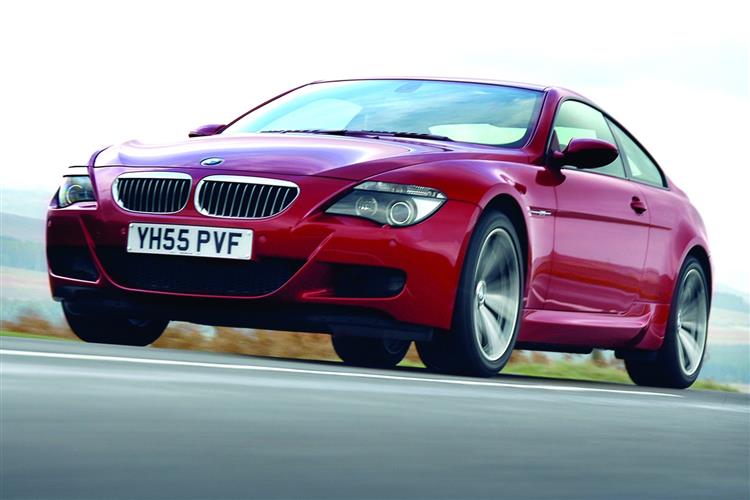