WHAT'S YOUR ANGLE? (some text hidden)

Few cars in recent years have caused such rampant division of opinion as BMW's E60 generation 5 Series. Few have many gripes about the way the car drives, the value proposition or the build quality but ask about the styling and you'll get some colourful responses. Now that we've had some time to get used to it, the lines aren't quite as shocking as they were when the Five first rolled into BMW dealers back in June 2003 and the introduction of the mellower looking Touring variant also helps. Get beyond the challenging styling and you have a car that retains BMW's position as the best driver's car in the executive class. Business as usual.

People should really have girded themselves for the 5 Series given the unconventional styling of the 7 Series and then the Z4 roadster. Its predecessor had been a conservatively styled thing but had nevertheless found great favour. When Burkhard Goschel, BMW's head of research and development proclaimed that "the days of lookalike BMWs are over. from now on each volume model will display its own unmistakable personality" it became apparent that radical styling was going to be an ongoing theme, a point rammed home by the subsequent 1 Series launch. At the outset in June 2003, the 5 Series range consisted of the 520i, 525i, 530i and 545i petrol-engined saloons with a 530d diesel saloon also offered. A 525d entry-level diesel model was slipped into the range at the end of the year with the mighty 535d topping the diesel tree in autumn 2004. Touring models also made an appearance in 2004, the first of the five-door estates landing in late April. A fire-breathing 507bhp V10 engined M5 model was also unveiled in summer 2004 but wasn't scheduled to go on sale until the following Spring. BMW's innovative Active Steering system was slightly modified in autumn 2004 to offer a less radical feel. A whole suite of incremental trim improvements was announced for the 2005 model year car including a TV tuner which could accept digital as well as analogue signals, a wider palette of body colours, and more sophisticated in-car entertainment options. In January 2005, new Valvetronic engine technology was introduced on 525i and 530i models and a 523i variant introduced (also featuring it) to replace the 520i. A major facelift at the start of 2007 saw power boosted on most models and economy improved with the aid of regenerative braking technology. The styling was also tweaked. At the front, the headlights and indicators became clear glass while the kidney grille sits flush with the bumper. The M5 Touring was introduced at the same time and a little later, the 520d model was boosted to 177bhp.

What You Getword count: 316

At first glance, the 5 Series seems to incorporate cues from both the Z4 and the 7 Series. The oddly proportioned bootlid is reminiscent of the 7 Series whilst the 'flame surfaced' flanks reflect the light in a similar way to the Z4. Whereas the 7 Series and the Z4 are relatively specialist items, the 5 Series represents a major cash cow for BMW and if the public don't take to the styling, there will be major consequences. Although it doesn't rest easily on the eye, we'll probably grow used to it in due course. Much of the focus has gone into developing innovative technology but at the same time keeping weight from creeping up. More space is coupled with a weight saving of up to 65kg, due in no small part to lightweight aluminium including much of the chassis and bodywork of the car and the suspension components. This focus on weight saving has resulted in some class leading performance and economy figures from a range of engines that is largely familiar fare. Although the 5 Series does carry over some 7 Series styling cues, it's clear that BMW have listened to customer feedback. The bootlid is less extreme and although the 5 Series features the controversial iDrive control system, it's notably easier to use than the 7 Series system and is backed up by more conventional knobs and switches on the fascia. The fiddly electronic handbrake system used by its big brother has also been replaced, in this instance by a conventional manual one. The Touring estate is a more conventional-looking car but the unique 5-Series styling cues are always evident. The M5 will be out of most buyers' reach but the Sport trim level offers some of the styling flair without the pricetag. You know the drill, wider air intakes, bigger wheels, sports suspension, flared side sills, it will prove a popular choice. 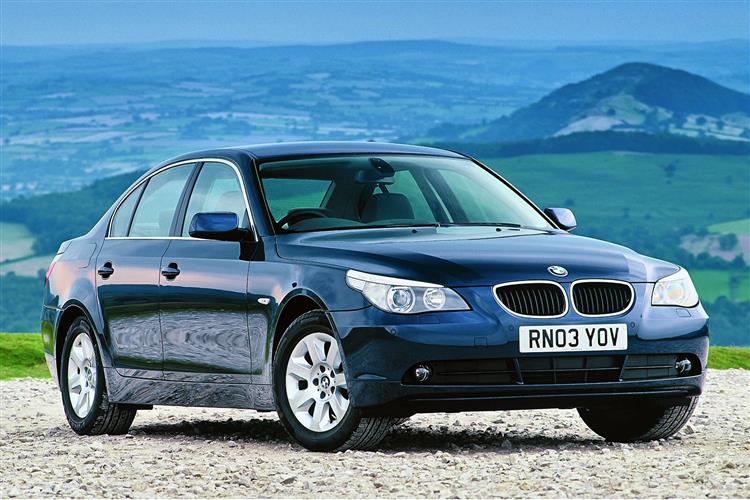