ALL FOR ONE (some text hidden)

The entry level BMW convertible had, for as many years as most could remember, been the 3 Series but with that car creeping ever further upmarket, enough breathing room was created below it for another drop top - the 1 Series Convertible. Although it's open to debate whether the One satisfies the key criterion of an open car which is to look fantastic, that it satisfies the second, namely to make you feel great behind the wheel, is beyond question. Besides, if you've got this far you probably aren't deterred by its styling in the first place. Here's what to look for when shopping for a used example.

The BMW 1 Series Convertible was the fourth body style to be spun from the 1 Series platform and arrived in the UK in spring 2008. British buyers had already grown accustomed to the styling of the three and five door hatchbacks and the lithe two-door Coupe had been on sale but a few months had passed when the Convertible broke cover. In many ways it was a natural progression for the 1 Series and came against the backdrop of escalating rivalry in this market, Audi being hard at work bringing a soft top version of the A3 to customers, with BMW pipping Audi to the post by just a couple of weeks. Because the 1 Series was now a familiar concept to UK buyers used to its individualistic styling and its combination of decent power, excellent economy and emissions, firm ride and almost non-existent rear legroom, sales of the Convertible ramped up to speed more briskly than had those of the hatch or the Coupe. BMW's fears that the success of this car would cannibalise sales of the 3 Series Convertible were realised and since the 1 Series Convertible was launched the 3 Series Convertible sales curve has levelled off. The range launched with the 120d, 118i, 120i, 125i and 135i models, the Munich company then backfilling the line up with economical 118d and 123d variants in August 2008. The 2011 model year cars feature subtly revised styling, more generous equipment levels and the addition of Aero Curtain, an aerodynamics package that improves the flow of air around the front of the car and channels it over the front wheel arches.

What You Getword count: 344

The 1 Series Coupe was obviously designed with a Convertible model in mind. Both cars share a virtually identical silhouette, with long bonnets, short overhangs and set-back glassy 'greenhouse' proportions. The distinctive, horizontal shoulder line runs from the front of the bonnet, through the long, frameless doors, and onto the end of the boot lid. From the rear, the boot lid finishes in a discrete lip spoiler that houses the integrated third brake light and typical L-shaped rear light clusters use LED-powered light conductors. This drop-top model features a fabric roof that opens or closes in 22 seconds, and at speeds of up to 25mph. The roof material is available in classic black, beige or, as a world first, an innovative anthracite silver fleck which is a fabric material interwoven with fine shiny metallic fibres. Inside, BMW reckons that there's space for four occupants, though the cabin isn't as large as that of, say, convertible Audi A4s or a Saab 9-3s. Still, there's a respectable 305 litres of boot space with the roof up (260 litres with the roof down). A nice touch is a 'convertible' setting for the air conditioning when the roof is down. The high quality materials and solid construction always impress and it's this general classiness that makes it all feel special rather than any stand-out detailing. The major controls for the entertainment and ventilation systems are confined to a panel ahead of the gear lever and the rest of the stuff you need is clustered on or around the steering wheel where it's simple to access on the road. There are four trim levels to accompany the seven engines that make up the 1 Series Convertible range though the top powerplants only come with the plusher trim levels. Buyers choose from ES, SE, Sport and M Sport. It's the M Sport package that really makes the difference to the car's appearance, and the way it drives. Buyers at this top level receive sports suspension, sports seats, an M Sport steering wheel and the M Aerodynamic package on their car. 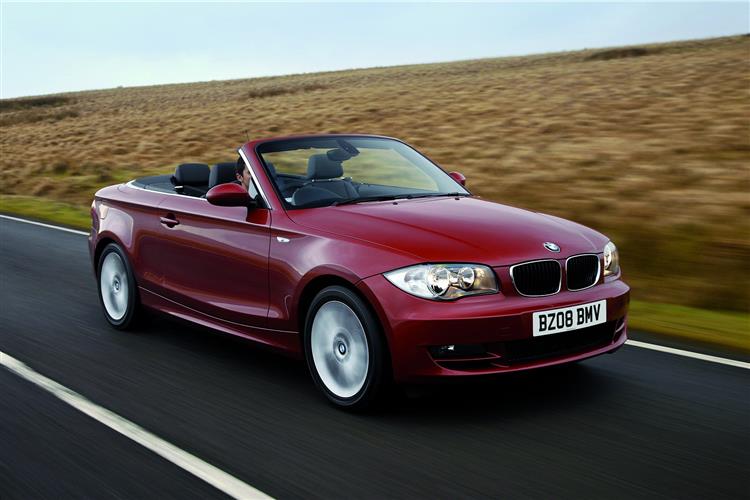