The BMW X5 is often said to have revolutionised the luxury 4x4 market with its prowess on the road but this isn't that X5. The model we look at here is the second generation one and by the time it appeared in 2007, it was evolution that was called for. The BMW bigwigs wanted to put the X5 back on top, ahead of a glut of rival models which had followed its revolutionary lead. The differences might not be immediately obvious but a squint at the detail shows a car that's bigger, plusher and more sophisticated than its subversive forefather.

The original X5 turned up in 1999. It was BMW's first glimpse above the parapet in the 4x4 market and, with hindsight, it was exactly what should have been expected from a brand touting itself as builder of 'The Ultimate Driving Machine'. Nobody expected it. The X5 immediately made rival luxury 4x4s look like 1930's farm machinery by comparison. BMW had dumped its car's ability to wade up to its wipers through swamps and trundle through boulder fields. Instead it went for nimble handling and sports car performance over terrain that well-to-do UK buyers were infinitely more likely to encounter - tarmac. Big success came the X5's way and soon, the market was packed with imitators. The first stage of BMW's response came in 2004 in the shape of the X3. This was a smaller vehicle but not that much smaller than the original and the upper-spec versions were very close to the X5 in price, making it look somewhat redundant until the second generation version arrived in 2007. BMW's luxury 4x4 had grown larger, more sophisticated and more expensive. Its lunge upmarket left wiggleroom for the X3 below and BMW's 4x4 range took on a more cohesive look. The engines were largely carried over from the Mk1 model but nobody was going to complain about that as they were largely excellent. The most affordable options were the 235bhp 3.0-litre diesel and the 272bhp 3.0-litre petrol. Then there was the range-topping 355bhp 4.8-litre petrol powerplant. Arriving a little later and not inherited from the original car was the diesel unit in the 3.0sd model that used twin turbochargers to boost its output to 286bhp and a 3.0-litre twin-turbo petrol. The model designations were later tweaked so that twin turbo petrol became the xDrive35i. The two diesels became xDrive30i and xDrive35i while the V8 petrol got xDrive48i branding. By mid 2009, only the two diesel models and the xDrive48i V8 petrol were being offered in the UK and there was a further addition in the shape of a twin-turbo V8 packing 555bhp. This monster formed the centrepiece of the X5 M.

What You Getword count: 305

Let's have a look at the pertinent facts. This X5 is only 19cm longer than the original model but manages to incorporate up to three rows of seats. Even with all three rows occupied, there's still 200 litres of boot space. In a more conventional five-seat configuration, the X5's boot measures 620 litres, up 155 litres on its predecessor. There's also an additional 90-litre storage compartment under the floor if you're not interested in having seven seat capacity. This X5 is also 6cm wider than its forebear but, in another case of the engineers pulling a rabbit out of their hat, weighs no more in base specification. Those third row rear seats are quite small and an adult wouldn't want to spend any length of time cooped up in them. They aren't protected by the X5's side airbags either and they were only offered as an option, so the majority of used models won't have them anyway. Space in the other seats can't be faulted and neither can the build quality. The design inside is standard BMW stuff, minimal and neat without too much wow-factor but you've got to love the way it's all put together. The iDrive control interface will flummox owners at first but it can be mastered without too much effort and you should be whizzing through those menus in no time. The styling of the car is a good deal more conservative than many contemporary BMWs with little of the ostentatious 'flame-surfacing' seen on the 5 Series and Z4 of this era. Instead, BMW adopted a more restrained look not a million miles away from the old model. The stance of the car is much like a supersized and rather chunkier X3. It's a very deft piece of styling that, in common with its predecessor, manages to disguise the bulk superbly. 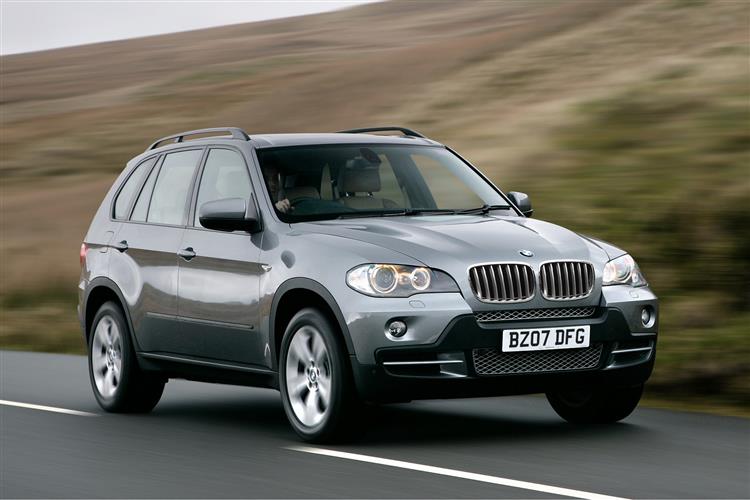