CLASS OF THE FIELD (some text hidden)

The BMW 7 Series is a vehicle that has perhaps lacked the recognition it deserves. Rivals such as the Mercedes-Benz S Class, the Jaguar XJ and the Audi A8 have all enjoyed a somewhat higher profile in the luxury saloon sector. Still, used car buyers looking for a bargain won't mind one jot. The F01 generation 7 Series that debuted in 2009 is one of the best big car bargains around at the moment. Do your homework and you'll turn up a car that still feels positively plutocratic.

Right. In order to make sense of where this model fits in the 7 Series pantheon, a very brief history lesson is in order. The first 7 Series, the E23 in BMW-speak, featured the undercut shark nose front and was built from 1977 to 1986. This was replaced by the elegant E32 generation car, still with twin round headlights on each side of its grille, built between 1986 and 1994. The sleek E38 model succeeded this car, marking a move to more complex headlamp pods, and many still feel this is the high point of 7 Series styling. That model was replaced by the bulky E65 in 2002, a car that introduced many technical innovations but was saddled with lugubrious styling, BMW smoothing away the worst excesses with a 2006 refresh. The car we're looking at here, the F01 (or F02 in long wheelbase guise), debuted in 2008, in what might have been the most imaginative vehicle unveil I'd ever seen. A giant hourglass appeared in Moscow's Red Square, filled with 180,000 tiny metallic balls. On the allotted date of 8th July, the balls started falling through the neck of the hourglass, eventually revealing the new 7 Series. The car took a little while to appear in UK dealers, with the first British customers receiving their cars in early 2009. The economic downturn didn't do much for its sales prospects and the car was eventually replaced by a facelifted model in summer 2012. A quick look at sales for the 7 Series showed that diesel models accounted for 87% of all UK purchases.

What You Getword count: 339

The F10 7 Series is a sleeker thing than its rather barge-like predecessor, with a boot that no longer looked like a tacked-on afterthought. The exterior lines are clearly derived from the previous generation car with elements carried over from BMW's other products. The kidney grille is more upright and pronounced shoulder lines run the length of the car, forming a raised centre section on the bonnet. Inside, there's more of the same with design features that BMW owners will be more than familiar with. Where this 7 Series really moved the game on was in terms of its technology with all kinds of innovations being made available to customers with the money to afford them. Amongst the highlights is a night vision system that can detect and warn the driver if a pedestrian moves into the path of the vehicle. There's also a front side view camera system that activates cameras on the nose of the car to give the driver a better view at blind junctions. The Lane Departure Warning system monitors road markings and tells the driver if they wander out of their lane, while the Speed Limit Warning System can read road signs and warn the driver if they exceed the speed limit. These features are now beginning to filter down into more proletarian models but back in 2009 they were automotive black magic. The 7 Series is available in standard or long wheelbase form, so buyers can make a decision depending on whether they like to drive themselves or employ a chauffeur and sit in the back. There are SE and M-Sport trim levels but all models got an iDrive control system with programmable buttons for easier access to regularly used functions and a four-zone air-conditioning system. There's also an optional rear seat ventilation system that feeds cool air through the massaging seats in the back. Music fans can make use of the 8gb music server that has the capacity to store over 100 albums on the car's internal hard drive for instant playback. 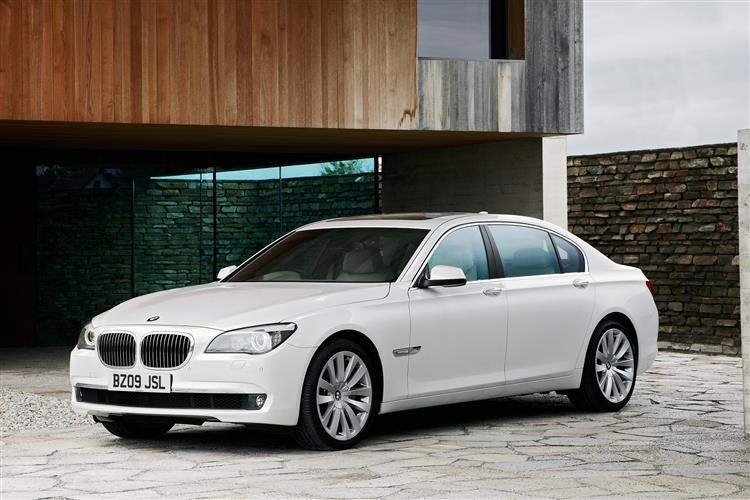