AN X THAT'S EASY TO SPOT (some text hidden)

Once in a while, a car comes along that's so far out there, it's almost as if the manufacturer is wilfully raising two fingers to the world. Nothing had prepared us for the X6. As far as anyone except BMW could see, there was little indication of any demand for a luxury 4x4 coupe and no rival brand had dared dream up anything similar. That didn't stop BMW from building it and well-heeled customers from buying it. The point of the car may be difficult to discern but there are times when you just have to stop rationalising and take a vehicle for what it is. A big, imposing, expensive but well engineered bit of fun.

The public perception of SUV vehicles was at an extremely low ebb in 2008, particularly SUV vehicles of the luxury persuasion. As far as the man in the street was concerned, they were inefficient, dirty, dangerous for pedestrians and being used on school runs in urban areas by rich individuals with only a tenuous control over their speed and direction. Most of this was extremely unfair but it still took bottle for BMW to drop the X6 into the debate like a hog roast at a Vegetarian Society picnic. Based on the more family-friendly X5 luxury SUV, the X6 arrived with a choice of four familiar engines beneath its vast four-door coupe bodywork. The xDrive35i model got a 3.0-litre twin-turbo petrol, the xDrive30d had a 3.0-litre diesel and the xDrive35d had a version of the same engine with a pair of turbochargers. At the top of the range was the 4.4-litre V8 petrol power of the xDrive50i, a car which could have been designed for the specific purpose of annoying the green lobby. Environmentalists had to recalibrate their pea shooters in 2009 when BMW put the icing on the X6 cake with the mighty X6 M. This added twin turbos to the 4.4-litre V8 engine to produce 555bhp and truly devastating levels of pace and agility for a 4x4 on this scale.

What You Getword count: 276

There's the raised ride height and high seating position of a big 4x4 but the X6 is designed to produce a far more dynamic look and feel than the traditional luxury SUV. The exterior design reflects this fact with a tapering roofline and a long rear overhang giving the car the stretched profile of a coupe. The standard 19-inch alloy wheels also lend the X6 the look of something that has just leapt straight from a designer's sketch book. Flared wheel arches and big front air intakes give the car an aggressive front end that's among the last things anyone wants to see looming in their rear view mirror. The four-seater cabin is a different story from the snarling exterior. The BMW design themes were carried over from the X5, the build quality is good and there's a classy, minimalist feel to the environment. There's little to remind you that you're in such an extrovert piece of machinery. In terms of practicality, the X6 is less impressive. The car weighs well over two tonnes even with its smallest engines installed and it's 4.9 meters long, so you'd expect a prodigiously roomy cabin. In the end, space is good but not great, that swooping roofline cutting into rear passenger headroom and the boot capacity. The X6 comes with a healthy list of standard equipment that includes two zone climate control, part electric seat adjustment, a 6.5 inch colour display screen with iDrive controller and 19-inch alloy wheels. Go for the xDrive50i model and you'll get a unique 19-inch wheel design, self levelling rear suspension, Nevada leather upholstery and a more aggressive looking kidney grille and tailpipe combo. 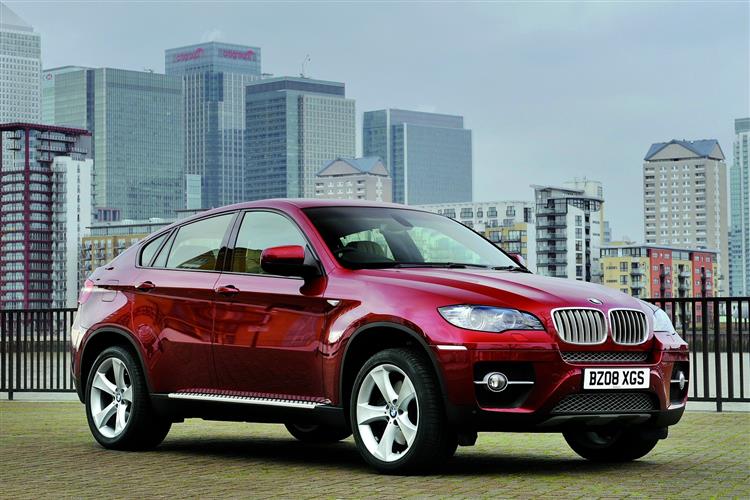