It's fair to say that BMW has been a little less than choosy where it applies the M badge in recent years. There have been cars you'd rather forget about, those that do a job and then there are the rare gems. Cars like the 1 Series M Coupe. Here was a model that bolstered rather than devalued the M badge. It was everything you want in an M-car; ferociously quick, light on its feet, smart in the way it deployed its technology and capable of painting a huge grin on its owner's face. Small wonder that used 1 M Coupes are now highly sought after.

It's hard to believe that BMW took quite so long to bring us a hot 1 Series. The hatch model debuted in 2004 but it wasn't until the two-door coupe version was introduced in 2007 that we got a rapid 306bhp 135i model. BMW freely admits it was pleasantly surprised by the take up of the fastest model in the 1 Series range and realised that with the M3 becoming ever more expensive, there was both demand for a hot 1 Series and a hole in the range into which it could be neatly plugged. BMW needed to be a little coy around its nomenclature though. An M3 or an M5 is clearly the M version of a 3 Series or a 5 Series, so it seemed logical to call a 1 Series Coupe with a proper 'M' motorsport engine the 'M1'. The trouble was that the 'BMW M1' name had already long ago been taken - and by a very different machine. That was used on a beautiful mid-engined supercar developed in the Seventies, with styling jointly conceived by Giugiaro in cooperation with Paul Bracq, BMW Design Studio designer of the time. That M1 was made so that BMW could go racing in the World Championship for Makes and ever since, for followers of the Munich brand, the M1 model has occupied a very special place in BMW's history. All of which explains why the lairiest 1 Series ever made was badged the '1 Series M Coupe' at its launch in July 2010, conducted via an official YouTube video and press release. In December 2010, BMW officially announced all details of the car in the media for a 2011 model year release. The model was an instant hit with both press and public, BMW selling a healthy 400 cars in the UK before the model was finally deleted in November 2012.

What You Getword count: 287

Stick with me a moment while I talk about the 1 Series M Coupe's stance. It's important. So many car manufacturers get this aspect of a sporting car wrong, but BMW have it so right with this model. Stance encompasses a number of qualities. The angle of the car's waistline, the visual relationship between the wheel and tyre and the corresponding relationship between wheels and wheel arches. Get it even slightly wrong and the design looks awkward and without dynamic tension. With a rear track that's been increased in width by 55mm and a chassis that sits properly hunkered down on its 19-inch Y-spoke alloy wheels, the 1 Series M Coupe looks power packed, like a Hanna-Barbera bottle rocket. The interior features sports seats in Boston leather with Kyalami orange stitching that offer plenty of lateral support. Customers also get an M leather steering wheel, while there's Alcantara with Kyalami orange contrast stitching on the door trim, door inserts, handbrake and gear lever gaiter and instrument binnacle cowling. The M logo is also embossed in the front of the headrests. Like other 1 Series Coupe, access to the rear seats is a bit restricted but some recompense comes in the shape of a respectable 370-litre boot. The car comes with a Dynamic Stability Control system that includes elements such as an anti-slip control function (ASC), brake assistant Dynamic Brake Control (DBC), a drive-off assistant, Cornering Brake Control (CBC), an anti-fading function and a dry brake function is also standard. There's also two-zone air-conditioning, cruise control, BMW Radio Business with MP3-capable CD player and six speakers. Options include Comfort Access, Harman Kardon Surround Sound System, Professional Navigation system with hard drive storage, Adaptive Headlights and High beam Assistant. 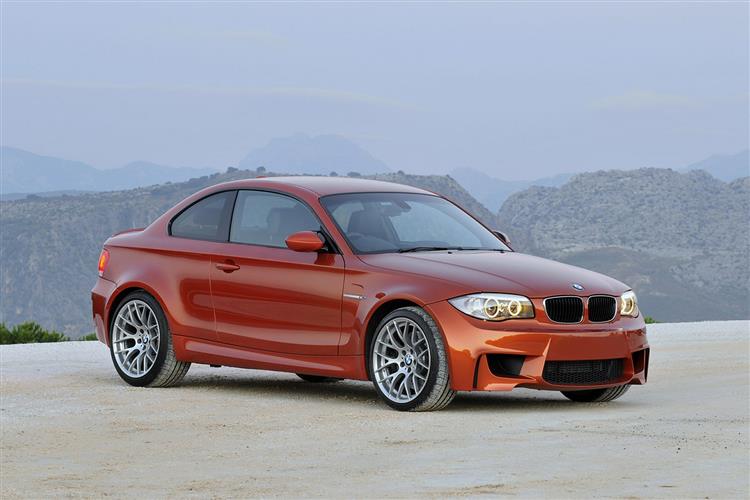