CLASS IS PERMANENT (some text hidden)

The trouble with being the benchmark car in any sector is that you're there to be shot at. Take the BMW 3 Series Coupe for example. This is the car that's pasted onto the wall of the design studios of Audi, Mercedes, Lexus, Jaguar, Infiniti and anyone else with aspirations in this sector. BMW not only has to knock all these rivals down, it also has to battle the buying decisions of potential customers who know that the BMW is the best car in its sector but might feel tempted to choose something else for fear of being thought predictable. To successfully do this, the 3 Series Coupe couldn't afford to be just a little bit better than its rivals. Munich needed to engineer a gaping gulf in talent. The E92 generation 3 Series Coupe managed just that, but it needed to constantly keep moving in order to stay ahead. Here we look at the post-2010 facelifted cars. Do they still make the grade second time around?

You might well remember that the E92 model 3 Series coupe first rolled into British dealers in August 2006, answering an impatient clientele who had been sold its four-door sibling for over a year. Despite being not too much of a surprise as a result, it was still warmly received, reviewers and customers alike enjoying the car's improved refinement, slick turbocharged downsized engines and sleek styling. That car sold right through to late 2010 when it was updated; a mid-life facelift if you will. As well as introducing some subtly revised styling, BMW also took a look at the engine line up and boosted the 320d from 177 to 184PS, with the 325d also getting a 7PS shot in the arm, taking it speak power to 204PS. BMW had achieved great success with its EfficientDynamics programme of fuel efficiency measures and against this backdrop, the numbers generated by the 335i Coupe didn't look great, so BMW also worked to improve this situation. The post 2010 car improved its economy by eight per cent and decreased its emissions by ten per cent. The 335d coupe also had its emissions shaved, dropping a tax band in the process. The M3 Coupe continued largely unchanged with the exception of a rather lovely M3 Limited Edition 500 version that arrived in March 2012.

Taut, sleek, muscular and boasting not a single shared body panel with the 3 Series saloon, this Coupe tends to attract many buyers before they ever clap eyes on one in the metal. The slightly longer silhouette of this revised model remains low and elongated, giving it an elegance that's singularly lacking in the buttoned-down saloon. Post-2010 tweaks that aimed to further set it apart from more mundane four and five-door 3 Series models included a larger front kidney grille that sat above a restyled front air dam whose single air intake was embellished with aluminium fins. The E92 generation model's plastic front wings remained to keep weight in check but the taller bonnet on this improved model had a subtle power bulge. There were also restyled bumpers and revised LED lights featured front and rear. Whichever 3 Series Coupe model you choose, you should find it to be decently equipped. The standard tally runs to smart alloy wheels, cruise control, Dakota leather upholstery, rear parking sensors, dual zone climate control, xenon headlights with built in daytime running lights and a decent quality MP3-compatible CD stereo. The sportily-oriented will want to consider finding a variant with M Sport trim and of course many buyers added items from the huge options list. 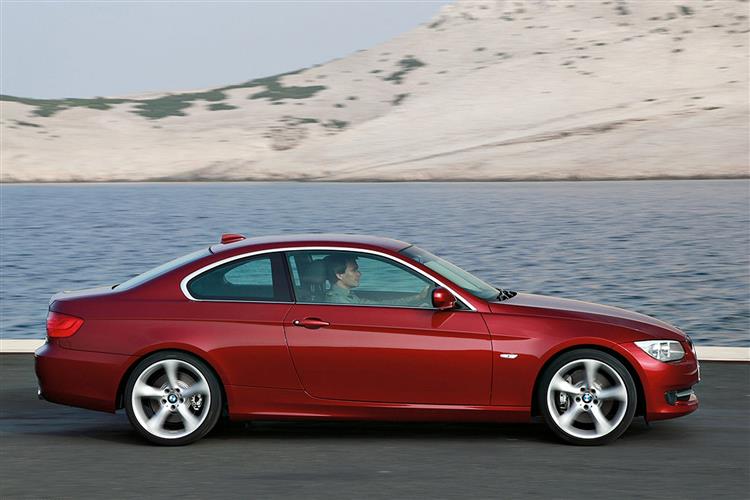