THE FAIRER SIX? (some text hidden)

Let's not beat about the bush here. The BMW X6 isn't for everyone. Fortunately for BMW, however, it's had enough about it to guarantee a steady stream of orders. Yes, many of us might wonder who these people are who walk past a perfectly good X5 in a dealership to plonk down an additional £2,000 for something with more challenging looks and less practicality, but then if everybody liked the same cars as us, we'd never manage to find any used bargains. Problem is, if you like X6s, you're not likely to find too many screaming used deals either as prices are pretty buoyant. Here's what to look for if you want to improve your chances of avoiding a dud.

The X6 first appeared in 2008 to a vaguely horrified motoring press. Here, most of us declared, was the answer to a question nobody was asking and which BMW would surely regret launching. Who on earth would want to pair the impracticality of a coupe with the size of an SUV? You lot did, that's who. The British public couldn't get enough and by 2012, BMW decided to update the X6. It's these later facelifted cars that we examine here. The mainstream range consisted of two 3.0-litre diesel models (the X6 xDrive30d and the xDrive40d), and two petrol engines (the xDrive35i and the xDrive50i). Then there was the triple-turbo M50d and the 4.4-litre twin-turbo petrol X6M. With revised styling and better efficiency, the X6 continued in much the same vein as before, eventually being replaced by an all-new model at the end of 2014.

What You Getword count: 396

Even BMW dealers will freely admit that the X6 divides opinion. It's certainly not one for the shy and retiring: all your friends will have a view on whether that coupe-like tapering rear roofline really works - or doesn't. The standard 19-inch alloy wheels also lend the X6 the look of something that has just leapt straight from a designer's sketch book. Flared wheel arches, long overhangs and big front air intakes complete the aggressive look. And it's wide, 50mm wider in fact than an X5, so car washes and road width restrictors will be challenging. The styling's been tweaked in the facelifted first generation model we're looking at here, but not radically so. A broader front kidney grille and repositioned foglights both attempt to further accentuate the already prodigious width and there's the option of incorporating the LED technology used in the revised rear tail lamps into a set of optional adaptive front headlamps that glow with a cool white light. Positioned behind the beautifully grippy leather-trimmed steering wheel with its lovely gearshift paddles, you sit on supportive seats that are mounted a little lower than you might expect in a large luxury SUV, this adding to the rather disorientating feeling of sportiness. It's a cabin largely lifted straight from BMW's X5 which is no bad thing, with its iDrive infotainment system control unit on the centre console together with the electronic gear selector and the handbrake. Where you might be expecting problems though is when it comes to a seat in the rear. That tapering rear roofline has to tell somewhere and, sure enough, the really tall may well feel a little cramped. BMW has contoured the roof though to make the best of what's on offer and as a result, averagely-sized adults should be quite comfortable, enjoying decent leg and elbow-room. Only two of them could be accommodated at the back when this car was first launched but fairly quickly afterwards, BMW added the option of a three-person rear bench so that family buyers could also enjoy the X6. Out back, the boot has quite a high loading sill - it's almost 900mm off the ground. Still, once you get your stuff over it, you'll find that there's a more than reasonable 570-litres of space with all the seats in place - or up to 1450-litres if you fold the rear backrest forward. 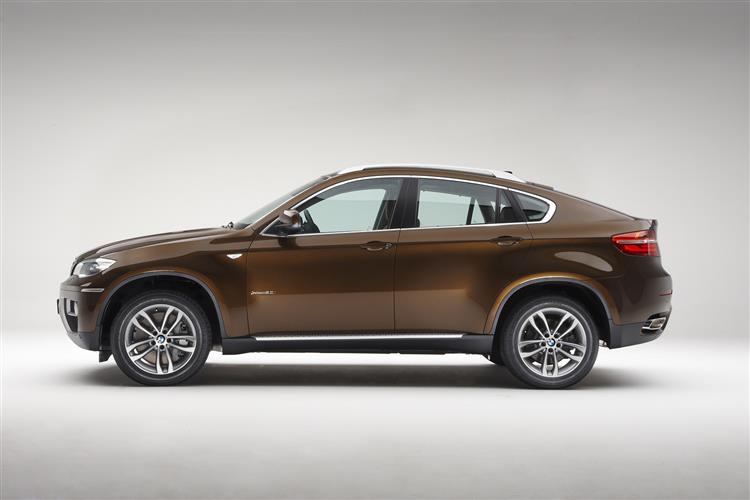