There are plenty of people ready to be cynical about lifestyle SUVs and the Crossover models that copy them but reality is that without these kinds of cars, the 4x4 market would have petered out here long ago. With the X1, BMW looked carefully at the most affordable end of this sector and produced a product carefully designed to suit, a more sophisticated design of higher quality in the post-2012 facelifted first generation guise we're looking at here. Inevitably, the Munich maker wanted premium prices for this car, but it still remained a relatively affordable way into BMW's SUV family and provided most of what was offered in the brand's more conventional 3 Series Touring estate - for a lot less money. Plus of course it handled better than a car of this kind had any right to do. Mind you, any company capable of turning something Range Rover-sized into a sportscar was hardly going to struggle with something this small. This X1 even boasts a set of economy and environmental figures strong enough to silence the green lobby. It is in short, like it or not, a car of our times. Let's see how these later first generation models stack up as a used buy.

In first generation form, launched back in 2009, BMW's X1 was a car provided to get customers onto the first rung of a ladder that the Bavarians hoped would then lead on to ownership of larger and faster X3, X5 or even X6 models. But it was also there to give BMW a foothold in the growing market for so-called 'Crossovers', essentially family hatchbacks like Nissan's Qashqai or Peugeot's 3008, cars offering a 4x4's look and feel without its weight or high running costs. This segment, along with that for RAV4-style soft roading SUVs, tends to steal sales away from conventional compact lifestyle estate cars like BMW's own 3 Series Touring. Many buyers of the Bavarian brand who might have been tempted off in such directions were kept loyal by the X1, but in its early years, this model was rather less successful in enabling the marque to garner conquest sales from the small SUVs and Crossovers it was targeted against. Many felt it lacked the premium feel of direct rivals like Audi's Q3 and by 2012, even mainstream brand products were starting to shade it in terms of technology and running cost efficiency. Hence the need for the much improved version launched in the early Summer of 2012 - the car we're going to examine here as a used proposition. With a smarter look, a much higher quality cabin, a more powerful range-topping twin-turbo diesel, lower running costs across the board and the most sophisticated auto gearbox in the sector, it gave BMW a much stronger premium compact crossover segment offering through to the launch of the second generation X1 model in the Autumn of 2015.

What You Getword count: 647

Though few would see the X1 as beautiful, it has all the high-sided big-wheeled butchness necessary in this part of the market, with a shape that's pretty much as you would expect a compact BMW SUV to look. Though the name - and the size, significantly smaller than a RAV4 or Freelander - suggests a 1 Series platform, there's a 3 Series Touring estate chassis underneath flowing curves and bulges that with this first generation X1 model, seem more appealing and more cohesively combined than before. That's less because the shape was substantially altered in this mid-term facelift - it wasn't - but more because when it came to this revision, the stylists spent more time getting those all-important details right. So there's less cheap-looking grey plastic and more painted metal on show. The indicators are integrated into the wing mirrors. There are redesigned headlamps too, with distinctive white LED corona rings and so-called 'active eyebrows' when they're specified in xenon form. At the rear, larger painted areas echo the frontal treatment and there's a more prominent underguard that's supposed to reinforce the sporty, off-road appearance. It's at the wheel though, where the biggest changes were made with this updated MK1 model. While the original version of his car used soft-touch plastics and materials in the areas you commonly touched, you didn't have to look much further beyond these to discover more down-market cabin finishes. Which wasn't good enough if this car was really going to tempt customers who'd just test driven, say, an Audi Q3. So the re-designed centre console of this improved X1 is completely covered in a much higher quality surface material, while the panel for the sound system and the climate control is finished in high gloss black to match the air vent surrounds. There's also smarter trim around the gearlever, the cupholder and the headlamp switch. Build quality from the Leipzig factory was improved strong too. Collectively, it's still wasn't enough to make this X1's cabin the plushest in the class, but it's certainly represented a very big improvement, with showroom appeal, as usual with BMWs, enhanced by an excellent driving position and a simple, clear and uncluttered instrument layout. All-round visibility is generally good, though the shallow rear window doesn't help when reversing. Rear seat accommodation will be fine for two adults once they've entered through the rather narrow door apertures and provided that they're under six feet tall. On shorter trips, you can squash up to provide space for a third middle seat occupant, provided they're not the whinging sort likely to object to the bulky central transmission tunnel. For longer journeys, the seat backs also recline for greater comfort, though that does of course have an impact on the luggage space you get behind them. Ah yes - luggage space. Though this car may share many of its underpinnings with a 3 Series Touring estate, it's also significantly shorter than one of those, so the bootspace - quoted at 420-litres - is around 20% less. And around 30% less than the 550-litres you'd get in an X3. We mentioned earlier that this is of course affected by the angle at which you pitch the rear backrest. If your back seat passengers don't mind a very upright position, it can be as much as 480-litres: if, on the other hand, they prefer to lounge backwards, it can fall to as little as 360-litres. Still, either way, you'll be able to accommodate most typical loads: say a couple of 46-inch golf bags stowed width-ways. Or, if you fold down the centre part of the 40:20:40 split-rear bench, you could pitch them length-ways. With this section down, you could also accommodate, say, a couple of snowboards or up to four pairs of skis. Fold all three of the rear backrest elements flat and there's a potential loading capacity of up to 1,350-litres. 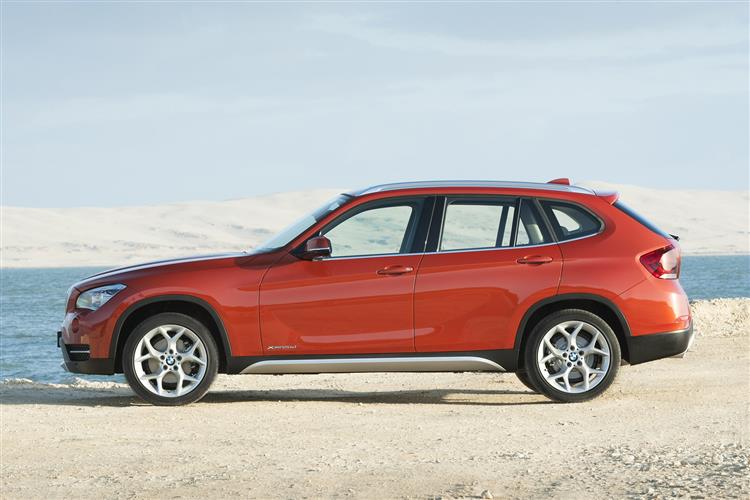