CLASS IS PERMANENT (some text hidden)

The sixth generation BMW 3 Series is a car that needs little in the way of introduction. Launched in 2012, it's since been recognised as a benchmark in the compact executive car sector and whether you opt for the four-door saloon or the five-door GT hatches or Touring estates, there's plenty of talent spread through the range. Buying used should be a fairly trouble-free experience. There's stacks of used stock out there and with a bit of careful trawling, you ought to be able to turn up a car in the right spec, condition and colour.

The 3 Series has been around for more than four decades of production, and over 12 million examples have been sold worldwide of this, the most successful car of its kind. And yet, every time BMW launches another generation of this model, it's easy to be taken aback at just how far the Munich company has moved the game on. This sixth generation version, dubbed the 'F30' in BMW-speak, was launched in the Spring of 2012 and carried on its broad shoulders an almost unimaginable weight of expectation. But that was to be expected. This, after all, is a car the company just could not afford to get wrong. The previous E90 model had to battle harder than expected in the UK against rival Audi A4s and, to a lesser extent, the Mercedes C-Class and struggled even more in the important US market. The global recession didn't help - and nor did the increasing quality of cars in the mainstream Mondeo sector below, models which could often look very tempting compared to the basic functionality of an entry-level yet still quite expensive 3 Series. This sixth generation model, then, was the car tasked with rebuilding the line to its prior rude health. It had to justify premium pricing with premium quality, extra equipment and ever-more efficient running costs. And continue to set itself apart from its Audi and Mercedes rivals with outstanding driving dynamics thanks to its unique rear-driven layout. When it launched in spring of 2012, the line-up was a bit thin. There was the 2.0-litre turbo 328i saloon, the 3.0-litre turbo 335i and a pair of 2.0-litre 320d diesels, a standard 184PS engine and a 163PS EfficientDynamics eco version. BMW quickly added many more to this number. In November 2012, it announced the 1.6-litre 320i EfficientDynamics variant, good for 170PS. There was also an entry-level 136PS 316i, also powered by a 1.6-litre twin-turbo engine. At the same time, BMW debuted the 318d Touring and 316d Touring which used a 2.0-litre four-cylinder twin turbodiesel engine. In the 318d Touring, the engine produced 143PS, while in the 316d Touring it gave 116PS. We also got a four-wheel drive options for the 320d and the ActiveHybrid 3 petrol/electric model. In June 2013, the hatchback Gran Turismo body was announced. In early 2014, the 3 Series got updates to its automatic gearbox system with the fitment of Proactive Drive, which took information from the sat nav to hold or drop gears when approaching roundabouts, bends and so on. This followed an improvement to the resolution of the sat nav and Bluetooth streaming facility. The mighty M3 saloon arrived in June 2104, powered once again by a six-cylinder engine but, for the first time, augmented by turbocharging.

What You Getword count: 508

Here's a car that looks better in the metal than it does in pictures - really good in fact. Sit this sixth generation model next to its predecessor and it looks lower and more aggressive - longer too, by 93mm. The reason for that tapered bonnet profile is pedestrian impact legislation, but whereas this stipulation ruins the styling of some cars, BMW has made this 3 Series look very purposeful indeed. Much of that is down to the stance. It's so easy to get this wrong, but this car gets it so right. Here's an example of why. BMW realised that in order to offer decent rear legroom, the car's wheelbase would need to be longer, so 50mm was grafted in between front and rear wheels. But instead of leaving it at that, the designers kept the balance of the design by almost equally widening it, a little more at the back than at the front so as to achieve the pleasingly dynamic, bottle-rocket effect. At the rear, there's a coupe-like profile and L-shaped light units with LED light bars. The cabin seems quite minimalist at first, with many of the minor functions being marshalled by the iDrive controller, but there are still plenty of buttons scattered around the dash. Nevertheless, it all looks agreeably elegant and the sweep of the dashboard roll top is a good deal sleeker than the rather ungainly double-bubble shape of this car's predecessor. The bright accents on the dash of the Sport trim level aren't going to be to all tastes though. There's a reasonable amount of stowage space, with sizeable door pockets in the front that can hold a bottle on each side, although those fitted to the rear doors are a bit meaner. The back seat always used to be the 3 Series weak spot, especially so when it was trying to take business away from huge mainstream medium range models like Ford's Mondeo. Just as well then, that this car offers noticeably more space in the rear. Take a seat here and you'll find an extra 100mm more legroom, which is certainly welcome, although the sharply ridged hard plastic cutouts in the seat backs aren't at all comfortable should your knees make contact with them. Headroom isn't too bad, although if you're anything above six foot you might find it a tad pinched. Overall though, you're looking at a useful improvement on what went before in a cabin slightly larger than comparable Audi and Mercedes models. It's still a pinch for three adults though and the rear-wheel drive layout means the middle passenger's not going to be loving the hefty transmission tunnel that runs down the centre of the car. Pop the boot and you'll find 480-litres of fresh air, but original buyers needed to pay extra for the optional split/fold rear seats and the ski-hatch for longer items. Of course, if you are regularly going to be carrying bulky items, you'll be wanting to talk to your dealer about the Touring estate or the Gran Turismo hatch models. 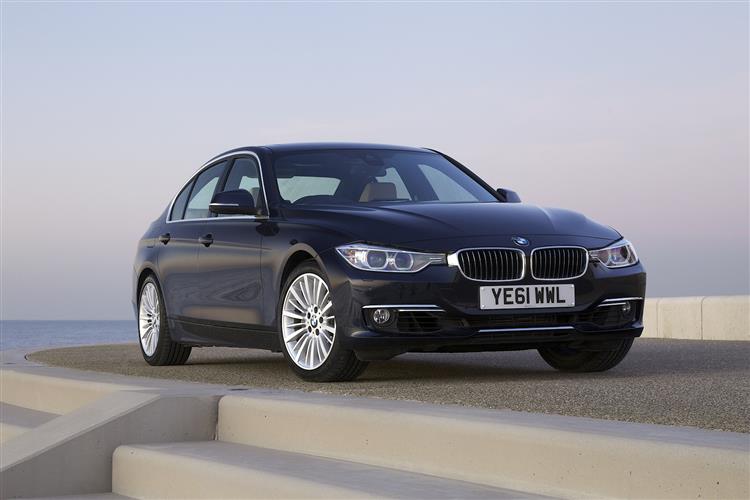