For four decades, the BMW 6 Series has built upon a performance coupe heritage that for the Munich maker, now stretches back over seventy years. Cars like the classic BMW 3.0 CSL were amongst those that in race trim established this German brand as a force to be reckoned with across race tracks the world over. In road form, their emphasis was a little different, with most models aimed more at Grand Touring than Grand opposite-locking gestures. M versions were provided for lead foots, but the majority of buyers were more likely to be setting off for a wine tour around Burgundy than a lap of the Nurburgring. That was certainly the way of things with the second generation version, launched in here 2003 and it's an approach that was further refined by its successor, the third generation 6 Series - or F13 coupe - launched in 2011. This car looks more dynamic, with styling in this form that looks arguably more elegant than that you get in the mechanically identical Convertible model. More importantly perhaps, it can claim to be a proper sports car, providing you press the right buttons and tick the right options. This is thanks to a whole phalanx of high technology provided to sharpen the driving experience on offer as and when owners feel it to be necessary thanks to the standard Drive Dynamic Control system and the optional Adaptive Drive and Active Steering features. An evolutionary approach perhaps, but an impressively thorough one. But does it stack up as a used proposition?

Second-guessing BMW is always a risky tactic. The German giant often embarks upon directions that at first seem baffling but usually prove profitable. Either the market eventually warms to the idea or BMW has a better-clarified vision of latent wants and needs than us. We suspect the answer might be a bit of both, supplemented by a fiendishly smart promotional machine. The BMW 6 Series coupe, launched back in 2000, was not a car that found instant favour. Unlike the lithe and lovely Seventies predecessor, the second generation Six was bullish, complex and effective, but never a vehicle that was so endearing that the normal rules of car buying were suspended. It was a Grand Tourer that prioritised destination over journey. The third generation car of 2011 adopted an evolutionary approach, improving each objective attribute while massaging away the egotistical excesses of Chris Bangle's styling work in the older MK2 version. The result was a sleeker, more cohesive product. It's a big coupe that doesn't crave cheap attention and to many, that will be instantly attractive. When the MK3 6 Series Coupe first rolled into dealers, buyers got a choice between the 4.4-litre 407PS 650i flagship and a 320PS 640i with petrol engines, plus the 313PS 640d, powered by a 3.0-litre turbodiesel, which BMW dubbed 'the world's sportiest diesel engine'. The powerhouse M6 appeared at the 2012 Goodwood Festival of Speed and instantly attracted a slew of orders, buyers keen to get the ultimate 560PS Six. Those that did enjoyed that accolade for just one year before BMW introduced an even more powerful version, the M6 with Competition Package, good for 575PS. The good news for existing M6 owners was that they could pay BMW £6,500 to have their cars upgraded to the more aggressive specification.

What You Getword count: 413

Many found the styling of this car's predecessor to be a little heavy-handed: imposing perhaps, but never beautiful. This 3rd generation model is much easier on the eye, arguably in fact more shapely than its Convertible stablemate. Longer, lower and wider, it's larger in every dimension than the model it replaced, the only exception being height: it sits half a cm lower to the ground. Yet despite the extra bulk, designer Nader Faghihzadeh has still managed to create a lithe, agile look apparently inspired by the feeling of surging through water. Imagine the movement of waves sent out by the bow of a powerful motorboat and you're supposed to be able to relate the impression to these harmoniously curved surfaces, from the long sweeping aluminium bonnet with its distinctive 'shark nose' past the frameless doors and on through to the muscular wheelarches. At the rear, BMW aficionados will recognise the V8 650i by its switch from these circular tailpipes to trapezoidal-shaped ones. At the wheel, the gorgeous interior with its fastidious attention to detail is very difficult to fault and is especially nice if you've specified the expensive option of a leather finish for the instrument panel that dials the cabin ambiance up a few notches. The interior design is based around what BMW calls a 'twin cockpit' approach, intended to feel like an upmarket powerboat. The dash is dominated by a large colour screen and the instruments are canted carefully towards the driver, though many of them are recognisable from the brand's cheaper models. To reduce button clutter, most of the functions and features are taken care of by the infamous iDrive system, here much easier to use, despite many functions and menus. And in the rear? Well the seats in the back are restricted in size of course but they do benefit from this model's extra 74mm of body length and 39mm of extra width to the point where they're significantly bigger than those provided by rivals and perfectly comfortable for children and adults on short journeys. They could be easier to get into though, despite an Easy Entry function which electrically slides them back and forward. The boot too, is decently sized for the class at 460-litres - that's 130-litres bigger than a Jaguar XK. BMW betrays the target market by letting on that this is enough to hold three 46-inch golf bags. More relevantly perhaps, you'll be able to fit in two medium-sized hard-shell cases, plus a flight case. 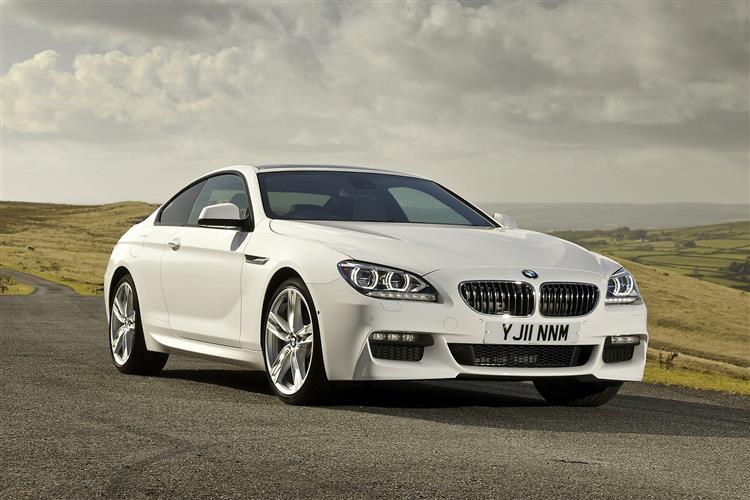