Discreetly luxurious, BMW's revised fifth generation 7 Series certainly isn't an obvious used car choice in the luxury saloon sector. But that doesn't mean it isn't a very good one. A package of improvements announced in 2012 created the model we're going to look at here which sold until its replacement by the sixth generation model range in late 2015. These enhancements made it smarter, more luxurious and more economic, matching the standards set by Mercedes S-Class and Audi A8 rivals and setting a few of its own.

If there's one thing you learn once successful in business, it's that the obvious choice isn't always the best one. An observation especially true when it comes to the acquisition of the kind of car necessary to underline your commercial success - a fully-fledged boardroom-sized luxury saloon. BMW used to dominate this market with its 7 Series but by the end of the 21st century's first decade, high flying executives were tending to prefer this Munich model's closest two rivals, Audi's A8 and the Mercedes S-Class. Hence the importance of this fifth generation BMW '7', first launched in 2009 but then improved in 2012 to create the facelifted MK5 model we're going to evaluate here as a used car choice. The updates brought smarter looks, higher technology and a more efficient engine line-up that included hybrid power for the first time. It was a technological recipe quite good enough to match anything opposing brands could offer in this period. Pretty much the same technology in fact used by the Rolls Royce Ghost that shares many of the underpinnings of this car. A Rolls Royce for the real world then? Is that really what we're looking at here? Or was this improved MK5 model 7 Series merely playing catch-up in the luxury saloon segment? Let's find out.

What You Getword count: 366

There's nothing particularly ground breaking about the way this Mk5 model 7 Series looks. At its original 2009 launch, the aesthetics were generally felt to be conservatively similar to those of the previous generation model and not much has changed in this revised post-2012 version. In fact, you really have to know your BMWs to tell it apart at all from the original MK5 model. But then the Munich maker reckons that it's all in the detail. The 8mm drop in overall height. The revised front kidney grille with a larger aperture boasting nine rather than thirteen slats. The three-sectioned lower air intake with its chromed outer edges. And its optional Adaptive LED headlights. Moving to the back, there's a deeper shade of red for the rear light units and extra chrome to set it all off. All done of course in the best possible taste. And inside the leather-lined cabin? Well, as you'd expect for this kind of money, everything is just beautifully built and has a lovely feel in operation, the only exception being this steering wheel that though perfectly functional, feels a bit 3 Series. Through it, you glimpse either a conventional set of instruments - as here - or optionally, one of those 'black panel technology'-style screens - basically the facsimilie of a set of instruments - with colour and display variable based upon your selection between the various Drive Performance Control modes. The seats have been redesigned but even so, it's even nicer if you can find a car fitted with the wonderful multi-adjustable comfort chairs that we guarantee are better than those in your front room. And boot space? Well luggage resides in a beautifully carpeted compartment but unfortunately, the battery pack that the Active Hybrid7 model has to lug about reduces the size of that cargo area from the 500-litres you get in a standard 7 Series model to just 360-litres. Still, at least the batteries don't impinge upon rear seat accomodation. Here, the experience on offer depends largely upon your choice between the standard bodyshape and the long wheelbase version which offers 14cms of extra rear legroom for a presidentially-sized space that enables you to really stretch out. 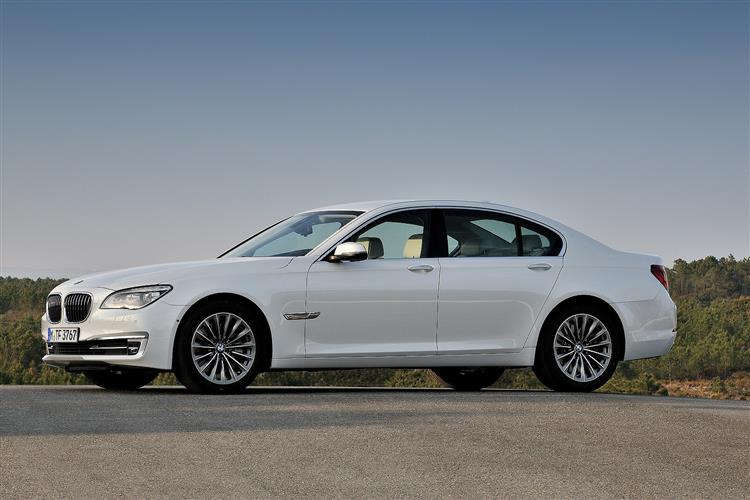