Take a facelifted post-2012 fifth generation BMW 7 Series luxury saloon. Then add a twin turbo 3.0-litre petrol straight six and a pokey electric motor. Give this hybrid blend the ability to run on silent electric-only power at low speeds. Then add a more driver-focused set-up than any other full-sized luxury saloon has yet managed to offer. The result is the rare, covetable and eco-minded BMW Active Hybrid7. It was a rare sight on our road when it was new, but does it make sense as a used buy?

BMW wasn't the first to bring hybrid drive to the full-sized boardroom level luxury saloon segment. What the Munich brand did do when it launched this Active Hybrid7 model in 2012 was to bring an added an extra driving dimension to petrol/electric power in the full luxury saloon sector. A car that allowed you to sack the chauffeur and enjoy yourself with a green-tinged conscience. This proved to be a rare choice amongst 7 Series buyers on these shores but it was a car that back in 2012 the Bavarian brand had to offer in its major American and Chinese markets, countries not as dominated by diesel as we are in Europe. At the time, BMW also needed to be seen to be providing hybrid technology if it was to match rivals from Mercedes, Audi, Jaguar and Lexus. None of these brands had then developed hybrid luxury saloons that majored on providing a dynamic driving experience. This was where this Active Hybrid7 model aimed to set itself apart with a hi-tech 8-speed auto gearbox drivers could get the most from via a Drive Performance Control system optimised for petrol/electric motoring. The ActiveHybrid7 model was dropped when the sixth generation 7 Series was launched in late 2015, that range replacing the 'ActiveHybrid' approach with the Plug-in technology used by a more sophisticated 740e variant.

What You Getword count: 268

The ActiveHybrid7 model was based on the facelifted fifth generation 7 series we first saw in 2012. This improved model got a 8mm drop in overall height, a revised front kidney grille, a three-sectioned lower air intake with chromed outer edges and Adaptive LED headlight technology. And inside the leather-lined cabin? Well, as you'd expect for this kind of money, everything is just beautifully built and has a lovely feel in operation, the only exception being the steering wheel that though perfectly functional, feels a bit 3 Series. Through it in standard versions, you glimpse a conventional set of instruments, but some new model buyers opted to pay extra for a higher-tech 'black panel technology'-style screen - basically a facsimilie of a set of instruments, with colour and display variable based upon selection between the various Drive Performance Control modes. The standard seats are supportive, but it's even nicer if you can find a car fitted with the wonderful extra-cost multi-adjustable comfort chairs that we guarantee are better than those in your front room. And boot space? Well luggage resides in a beautifully carpeted compartment but unfortunately, the battery pack that this Active Hybrid7 model has to lug about reduces the size of that cargo area from the 500-litres you get in a standard 7 Series model to just 360-litres. Still, at least the batteries don't impinge upon rear seat accomodation. Here, the experience on offer depends largely upon your choice between the standard bodyshape and the long wheelbase version which offers 14cms of extra rear legroom for a presidentially-sized space that enables you to really stretch out. 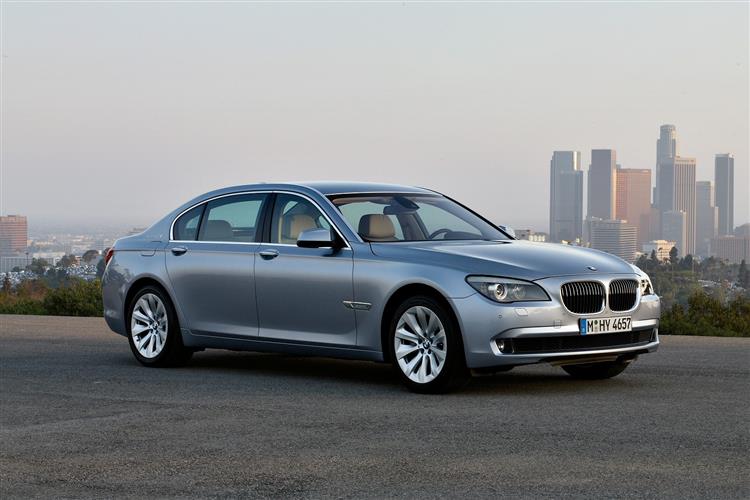