Back in 2011, BMW took the plunge into the hybrid sector with this, the ActiveHybrid5, a petrol/electric 5 Series saloon that at first glance, looked a very tempting executive segment choice. Using the turbocharged 3.0-litre straight six from the 535i, it added an electric motor to up the power to 325PS and offers driving dynamics of a kind that at the time of this car's launch, no other brand had yet managed with a hybrid. It all sounded great on paper, but hefty pricing and strong internal competition from BMW's excellent diesel 5 Series models meant in practice that the ActiveHybrid5 ended up being restricted to the tiniest of niches.

Even now, you might not associate BMW with hybrid power. But in the future, the Bavarian brand is determined that you should. A commitment that for UK buyers back in 2011 started here - with this car, the BMW ActiveHybrid5. This wasn't BMW's first petrol/electric model. A few years prior to this model's launch, US and European customers got less sophisticated Active Hybrid7 and X6 Active Hybrid models respectively based on the 7 Series saloon and the X6 sporting SUV. The Bavarian brand didn't think there was a UK market for those, but by 2011, with Mercedes and Audi entering the executive saloon market with hybrids of their own, the plunge needed to be taken. And if it was going to be, BMW wanted their offering to be state-of-the-art. Hitching their inline petrol six cylinder engine and their segment-leading 8-speed auto gearbox to hybrid technology for the first time in the way that was done in this ActiveHybrid5 model seemed like a good place to start from. It was all part of an ongoing re-education process that BMW embarked upon at this time in the executive hybrid market. The idea, as promoted by the Bavarian brand, was that cars of this kind could be more than just quiet, eco-friendly and rather dull. They could actually be enjoyable driving machines. It was a good advertising message, but it didn't actually allow this ActiveHybrid5 variant to make much headway in the market as the eco-option in the sixth generation 5 Series range. The numbers sold were tiny and the car was eventually phased out in 2015, a year before the seventh generation 5 Series range was launched, a line-up featuring a more sophisticated Plug-in hybrid derivative that was much better received.

What You Getword count: 494

From the outside, the ActiveHybrid5 looks like any other 5 Series apart from a set of rather prominent badges on the pillars. Otherwise take a look at this car and tell us what's not to like? Some think that this post-2010 'F10' generation 5 Series is a bit low key, but that probably comes from comparisons with the 'love-it-or-hate-it' marmite-styling of its direct predecessor, the E60, a car which wasn't originally well received but which nowadays many people seem to think is rather smart. This sixth generation 'F10' 5 Series model attracted no such aesthetic controversy, mainly due to the fact that there was a fundamental rightness to its shape, a basic athleticism that works right from the most basic diesel model up to the frankly terrifying M5 version. This hybrid variant got matt chrome tail pipes and a signature Bluewater paint finish. You remember we said that it's hard to identify this model as a hybrid? Well, we should qualify that a bit as it's only true up to a point. And that point usually comes when you open the boot for the first time. The 1.3kWh lithium-ion battery pack has to go somewhere and in this car, it sits just above the multi-link rear axle, chopping boot space down from an almost excessive 520-litres to a much more modest 375-litres, less in fact than a BMW 3 Series saloon from the next class down. True that's still a reasonable size, but the huge reduction in space is certainly something to bear in mind if you're drawn to the 5 Series on account of its big boot. It's also the reason why BMW never offered an estate or a GT five-door version of this model. The issue is further compounded by the fact that the rear seats don't fold down either, so if you're a skier, the planks will have to go on the roof. Talking of rear seats, they're as comfortable here as in any other 5 Series variant, though as usual in a rear-driven BMW, the high transmission tunnel means you won't want to be consigned to a position in the middle. At the wheel, it's just as well finished as you'd expect. There's a small gauge just beneath the rev counter that indicates battery range and if you look for around, you'll find a hybrid logo on the cupholder: apart from that it's standard 5 Series fare. If this is underselling things a bit in your opinion, you can switch the central display to a mode that indicates whether the electrical propulsion system is charging, discharging or inactive at any given time. Otherwise the architecture of this cabin throws up few surprises, with the design of the switchgear being similar to items seen before on the larger BMW products. The minimal design is appealing and there's usually a button or switch for all the most important functions, with only the more fanciful stuff accessed solely through the iDrive menu system. 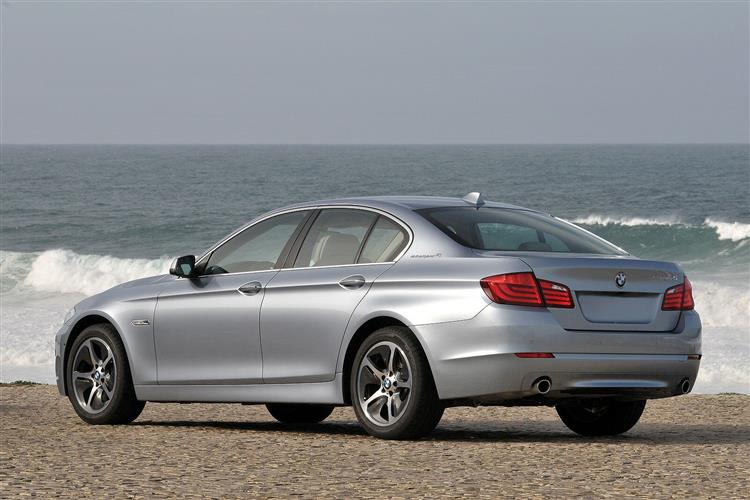