BMW has a long track record in bringing us desirable mid-sized sporty coupes. This 4 Series Coupe model, launched in 2013, turned out to be the most stylish yet, with class-leading 3 Series handling dynamics matched to extra exclusivity, a powerful road presence and, if specified correctly, an even sharper-feeling drive. Potentially, it's everything you'd want in a car of this kind.

Launched in 2013, the 4 Series Coupe, in contrast to its 3 Series Coupe predecessor, was intended to be far more of a stand-alone model. Even though under the skin, it still shared pretty much everything that made its less stylish but more practical showroom stablemate, the 'F30' generation 3 Series saloon, such a brilliant car. BMW launched this model to better target the threat posed by Coupe versions of Audi's A5 and Mercedes' C-Class. A Convertible version was launched in 2014 and a five-door Gran Coupe 4 Series model followed a year later. BMW upgraded the petrol engine line-up in 2016, then facelifted the range in the Spring of 2017. It's the pre-facelift Coupe model we're going to look at here as a used car buy.

What You Getword count: 671

This two-door 4 Series looks exactly as you would expect a coupe 3 Series variant to be styled. And it has all the predictable BMW coupe design elements we've seen so often over the years - the short overhangs, the long bonnet, the set-back passenger compartment, the shallow frameless side windows leading into the signature Hofmeister kink on each C-pillar and a flowing roofline that offers up a low, stretched silhouette. With so much familiar, how is it that this car can be so different and dynamic in its appeal? Move past the tick-shaped Air Breather ducts behind the wheel arches in the aluminium-crafted front wings and you'll find rear haunches that, for the first time on a mid-sized BMW coupe, were the widest part of the car, their swell giving a fantastic power-packed look to the rear end, like a bottle rocket that's about to launch. The rear end continues the theme, emphasising this model's increased track width through prominent horizontal lines and stretched L-shaped LED taillights at the outer extremities of the car. It's the styling that's the most credible confirmation of BMW's desire to differentiate this '4' from its 3 Series stablemate. Though the two cars use the same engines and basic platform, in exterior panel terms, the bonnet is the only thing they share, this coupe being 14mm wider and some 52mm lower than its four-door sibling - 14mm longer too to create an overall length almost identical to first generation versions of its Audi A5 and Mercedes C-Class Coupe rivals. The overall effect was to visually lower and widen this design to create a far more dynamic look than the old 3 Series Coupe could ever offer. You'll notice that up front too, where the grille and the xenon headlights give the effect of a car that's got a lot of gravity acting on it, hunkered down purposefully to the tarmac. The driving position's lower-set too, but that, the 'belt butler' that (rather slowly) hands you your strap once you get in and the grippy three-spoke sports steering wheel are really just about the only things setting this cabin apart from that of any other compact BMW. The fundamental ergonomics are virtually flawless and it all works so well, the main dials in particular a model of clarity. We particularly like the easy access to the climate and stereo controls that doesn't require you having to root around in submenus on an infotainment touch screen. You don't get one of those in this car - and you don't need it because BMW's iDrive system works so well, even if its screen isn't quite as well integrated into the dash layout as, say, you'll find with the Audi MMI set-up. There's a lot on it - from maintenance schedules and visual handbook representations to the many, varied and mainly optional functions that make up the Munich maker's ConnectedDrive system. And it's all very easy to find, particularly with the revised rotary controller that's part of the optional BMW Professional set-up many original owners specified. Getting into the back isn't the easiest task in the world and once you're snuggled in there, you'll find a slightly strange combination of decent legroom but rather pinched headroom. The extra 50mm of wheelbase this car enjoys over its 3 Series Coupe predecessor really tells here, freeing up 13mm more stretching room for your lower limbs. Unfortunately, the lowering of the roofline by 16mm that was necessary to achieve those slinky looks will see taller folk grazing their scalps on the headlining. Still, assuming they're not sat behind a couple of basketball players, most adults will be fine in the back on all but the longest trips. There'll be reasonable room for their luggage too. Once open, the boot reveals a large but shallow 445-litre space that probably does quite well to get within a whisker of the cargo capacity of slightly frumpier-looking rivals. BMW insisted on charging extra for a split-folding rear bench from new, but most original buyers specified that. 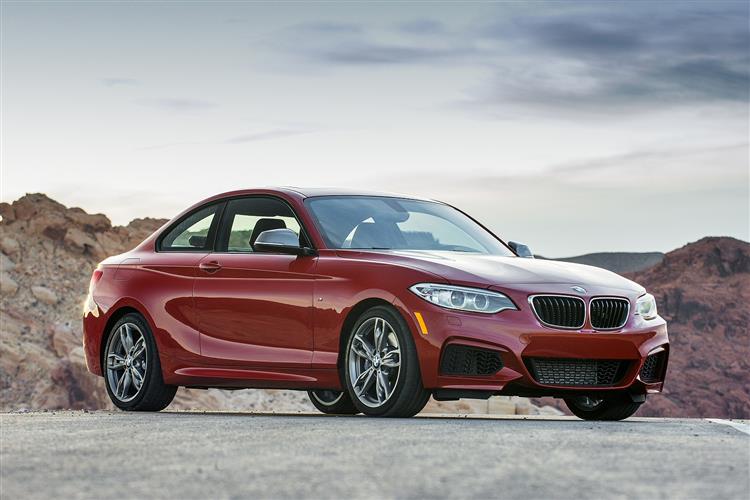