BMW knows a thing or two about roadsters and this improved second generation Z4 proved to be one of its best. It may not be the sharpest car in its class from this era to drive, but on the right day, in the right mood on the right road, you may not care, providing you're a fan of metal-folding roofs. The engines are efficient and willing, the looks are still stunning and the feeling you get behind the wheel still makes you feel twenty years younger.

Thinking of a used BMW Z4? We'd point you to the MK2 model - and in particular to the facelifted post-2013 version we're going to look at here. Back at its original launch in 2009, the Munich maker set itself quite a challenge with this second generation version of its well-regarded roadster. After all, the company's marketing stance as builder of 'the ultimate driving machine' seemed unlikely to be underlined by equipping its affordable roadster for the first time with a heavy folding metal roof. Yet that's exactly what we got in a car that in its segment sits somewhere between the elegant cruiser that is Mercedes' SLK and the sporting appeal of a Porsche Boxster. In this facelifted post-2013 form, it became smarter, faster and more efficient, plus there was a lower-powered entry-level sDrive 18i variant to make it slightly more affordable. That metal-folding roof tells you a lot about BMW's target market for this model. If it had been gunning primarily for Boxster buyers, then the Bavarians might have been able to resist the fashionable demand for automotive metal tops that flip down like Swiss army knives. As it was, they felt that the Z4 simply had to have one to properly compete. And as usual, their design team did the best possible job with the tools available. By early 2013 though, newer rivals were stealing the limelight in the roadster sector, hence the introduction of this updated model. It sold until early 2017.

What You Getword count: 507

Four wheels, two seats and a big engine. It doesn't get much simpler than that. Like any classic roadster, more than half the length is given over to the engine, which is one reason why there's only space enough for a couple of passengers. As to the changes made to this revised MK2 version, well, they don't amount to very much. The headlights include white LED corona rings and a white 'eyebrow' with additional chrome detailing, while in profile, the side gill features chrome detailing and LED side repeater lights. Otherwise, things are much as they were with the original version of this MK2 model Z4, with subtle styling flourishes like the indented 'V' set into the bonnet running like a ribbon snagged on the badge. Neat detailing then - and neat packaging too. You'd certainly expect the inclusion of a two-piece electro-hydraulic metal-folding roof to have altered this Z4's appearance a good deal more than it has but there are no awkward looks, no tell-tale bulky rear end. BMW's design team could work miracles though and in return for the security of a hard top, you've to accept a couple of significant drawbacks. First, the speed of operation: the top takes around 20s to raise or 21s to lower (about twice as long as the roof on a fabric-topped Audi TT Roadster). At least you can operate it at speeds of up to 20mph though. The other issue, rather predictably, concerns bootspace. That's fine of course when the roof's up - with 310-litres on offer. When the top's retracted though, that figure falls to just 180-litres - about 25% less than you'd get in a rival Mercedes SLK. Having said that, the Z4 has the advantage of being able to boost its trunk capacity via an optional ski-flap. Thus equipped, you could carry either a couple of sets of short-ish skis or, more ambitiously, a couple of sets of golf clubs. If you find yourself a car whose original owner paid extra for the 'Comfort Access' option, you'll be able to raise the folded roof sandwich slightly to get hold of bulky stuff you might have put in the boot when the roof was up but which otherwise would become trapped there when the roof is down. Many owners will want to avoid this problem by using the 15.5-litre interior storage area behind the seats. And behind the wheel? Well, settle comfortably into the low-slung seat and it all feels just right, your eyes pretty much on a level with the long vented bonnet in front, tempting you to lift the seat right up to try and see over it. The snug wrap-around dash is lovely and there are some lovely unique-to-Z4 touches like the clustered climate control dials. As you'd expect for the premium money being asked, everything is beautifully built from the highest quality materials. Plus the extra head, shoulder and elbow room that have been built into this MK2 model Z4 design give it an airier cabin feel than some of its competitors. 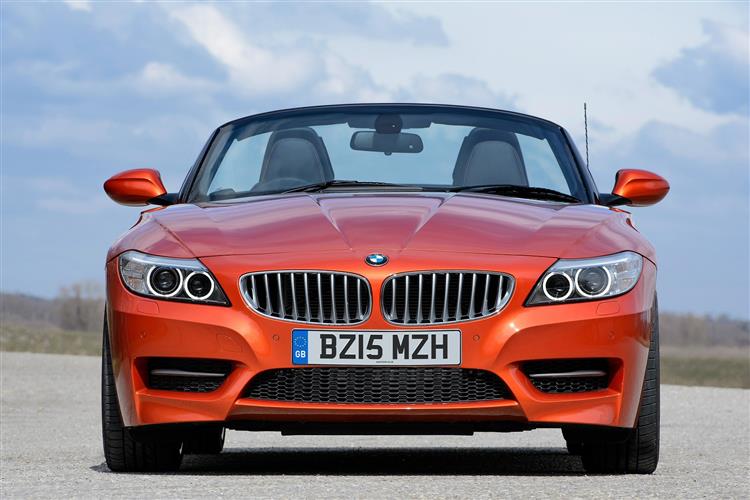