BMW's M5 is the yardstick against which all serious performance saloons are judged, a car that in fifth generation form got turbo power for the first time, courtesy of a 552bhp 4.4-litre V8. It was 10% more powerful yet 30% more efficient than its V10 predecessor and featured a trick diff got the power on tarmac. So, how does this 'F10' generation M5 stack up as a used buy?

Super saloons may come and go but one machine continues to define what a car of this kind should be. This one, BMW's M5. Since 1984 when the Munich maker first slotted the engine from its M1 supercar into one of its ordinary 5 Series sedans to create the world's fastest four-door, this has been the definitive motorsport-bred business blaster. With each generation, the formula has been the same: huge reserves of performance matched to state-of-the-art technology. What has changed though, has been the configuration of engine required to deliver these benchmarks, with BMW's M division breathing on everything from straight sixes to a couple of 5.0-litre powerplants, first a V8 and then, for the MK4 'E60 model, an even more manic V10. For the first four M5 generations, only normally aspirated units were used but when the switch was made to this MK5 'F10' model in late in 2011, a 4.4-litre V8 was introduced with twin turbos boosting its output to a frantic 552bhp. Enough back then to make this unit the most powerful BMW series production engine the brand had yet produced. You might have thought that this would have been a difficult product to launch in an era of eco-consciousness but BMW said not, proud of the way it had created a 190mph machine still able to deliver up to 30mpg at cruising speeds and put out no more CO2 than a humble Ford Cortina, thanks to running costs slashed by 30% over the previous version. Certainly, this flagship 5 Series was a massively different ownership proposition to its V10 predecessor, which was a thirsty beast with a clunky gearbox that forced a motorsport mood upon you whether you wanted it or not. The 'F10' M5, in contrast, was a far more sophisticated proposition. The most capable super saloon on the planet from its era? Very possibly. The car was launched n 2011, then power was raised from 552 to 560bhp later in 2012 and at the same time, a 'Performance Edition' was introduced. A lightly facelifted model was introduced in 2013. In 2014, a 'Jahre Edition' 600bhp model was introduced. The 'F10' M5 sold until early 2017 and the introduction of the replacement 'F90' model.

What You Getword count: 494

M5s have always been good at dialling down the aesthetic excess to create a potent, yet low key appearance that'll let you get away with using more of that performance more of the time. This one is no different, understated to a tee, just as most owners will want. Compared to its predecessor, this F10 generation car cut out the take-aways and hit the gym a bit harder, with a far more lithe profile and sleeker detailing. Being longer, wider yet lower will do that for you. Couple that with some more overt M styling touches and you're left with a more confident design that shares only 20% of its parts with a regular 5 Series. At the front, the broad black grille slats and the trio of air intakes that cool the big V8 combine with the LED light rings and bi-xenon main beams to afford some serious rear view mirror presence. The wheel arches are gently teased over 19-inch wheels as standard - but many original owners opted for extra-cost 20-inch rims. Though the wheel spokes, you glimpse the six-piston fixed callipers of the high performance braking system. The lowered suspension means the car's stance is spot on, the wheel arches properly stuffed and with the perfect amount of ramp angle in the body to give the car a tense, poised appearance. The rear view contains a four-pipe exhaust pack, divided either side of the diffuser, whilst a small flap on the rear edge of the boot lid provides additional downforce at speed. Inside, as usual with BMW cockpits, the driving position is dominated by a central 10.2-inch colour screen that marshals the functions looked after by an iDrive system that in this form was much simpler and more intuitive to use. If you thought though, that the whole purpose of iDrive was to reduce cabin button clutter in cars like this, you might be interested to note that before you even get to the myriad of functionality that is iDrive, there are no fewer than 58 buttons to get to grips with. But then the controls of any sophisticated race-bred performance car are likely to feel daunting at first glance. And race-bred this M5 most certainly feels, from its M Sport seating to its aluminium trim, from its red-needled white-lit M circular instrument dials to its grippy three-spoke M leather steering wheel. As ever, this remains a practical supercar, so up to three adult rear seat passengers can join you as you power from 0-124mph in just 13 seconds at the beginning of a tyre-smoking lap of somewhere like the Nurburgring Nordschleife. You can easily sit one six-footer behind another, with head and elbow room to spare. And your passengers' belongings can be equally comfortably ensconced in a spacious 520-litre boot nearly double the size of that in, say, a rival Lexus ISF. A space that's further extendable if you get yourself a car fitted with the optional split-folding rear seats. 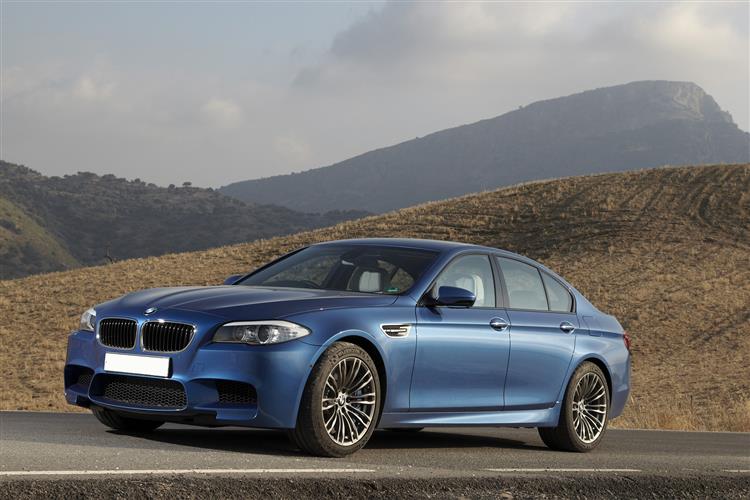