BMW's 5 Series Gran Turismo brings SUV, large estate and luxury saloon qualities to a package that offers executives something very different. There's nothing quite like it.

Back in 2009, we all thought that with its 7 Series luxury saloon, its huge 5 Series Touring executive estate and its X5 luxury 4x4, BMW had pretty much covered all the bases for well-heeled family buyers. Not a bit of it. The Bavarian maker also decided that there was room in the market for a model combining the best bits of all these cars: long distance comfort, practical carrying space and purposeful elevated SUV style. They called it the 5 Series Gran Turismo. It was a rather awkward-looking thing but it was extremely spacious and extremely luxurious. BMW initially said it wouldn't offer the car with xDrive 4WD, but later relented and made this feature available as an option. The 5 Series Gt range was facelifted in 2013, at which point an entry-level four cylinder 520d diesel variant was added to the line-up. The car sold slowly until early 2017, after which it was replaced by the slightly more up-market 6 Series Gran Turismo model.

What You Getword count: 489

A 5 Series GT is certainly big - longer than a Land Rover Discovery - and looks it, despite the stylists' efforts to disguise the fact with frameless side windows, prominent swage lines down the flanks and a plunging roofline at the rear. At least it's unmistakably a BMW, though as to what kind, the 5 Series badge is a little misleading since this car actually sits on a 7 Series platform and is 300kg heavier. Despite all that bulk, there's still only room for five inside. Well, more accurately four, since at the back, the middle seat leaves you perched uncomfortably on a fold-out armrest, so is only for occasional use. Higher trim levels discard it completely, concentrating simply on providing more opulent rear space for two. Mind you, even in the theoretical five-seat configuration most examples tend to feature, the two brilliantly comfortable rear seats really are from the super-luxury level, sliding back and forth by up to 100mm and reclining for greater comfort on longer trips, with the result that they offer you the legroom of a limousine and the headroom of an SUV. Relaxing here, enjoying the airy feel provided by the standard full-length glass panoramic sunroof, you realise at last where the designers' priorities lay in using all of that body length. It wasn't in bootspace, the 440-litre standard capacity easily bettered by the 500-litres you'd get in a 150mm-shorter 5 Series Touring from this era. Still, if you're bothered about that, the GT is ready to make amends by offering you a super-clever dual-opening boot arrangement. As with the first car we saw this on, Skoda's Superb, the idea is that you can use your car either as a saloon or a hatchback. You either open the lower half of the tail like a conventional boot lid, or, using a separate catch, the whole tail, including the rear window, as one unit. Access the rear like this in hatchback form and, as you would expect, luggage capacity can be increased by split-folding the rear seats - giving you up to 1700-litres of space, though the seats don't fold completely flat. You don't even have to worry about the huge rear parcelshelf getting in the way as it can be stowed neatly away in a special compartment made for it under the load floor. Slam down the hatch and examine it carefully and you notice a couple of things. First that there's no rear wiper - a little irritating in a car this expensive claiming hatchback versatility. Second that that the actual clear glass section isn't very great, meaning that from the front, rearward visibility isn't very good. Still, when you are at the wheel, it's as plush as any 7 Series luxury saloon, but with its own distinctive style offered by a backlit matt silver insert that runs the width of the dashboard and a fascia that lights up with smart digital dials. 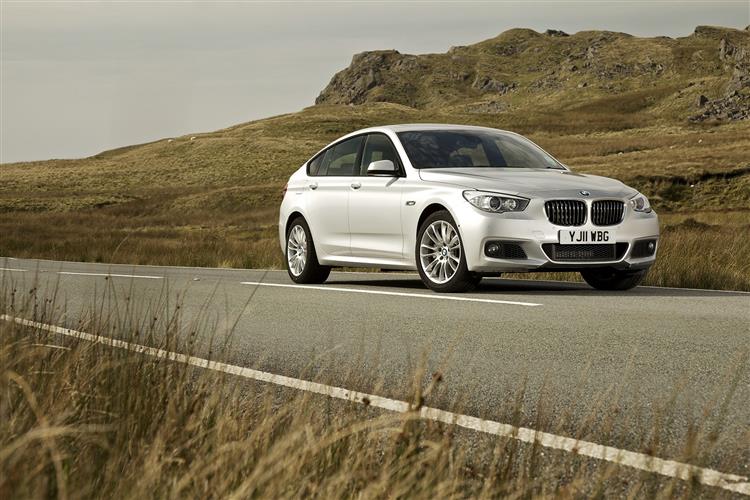