TO THE POWER OF FOUR (some text hidden)

When BMW launched their original X4 model, they told it was a sports coupe. Whatever your take on that, their X4 is certainly an interesting take on fashionable family motoring, an avant garde compact SUV you'd want to be seen in. If you can afford the fee, it's a tempting, sportier take on the mid-sized SUV genre and if you like the looks, then you'll probably like everything else because it's pure BMW. It's even a little more practical than you might expect. True, the world may not need another car like this - but you certainly might.

BMW is leaving no stone un-turned in its efforts to fill every possible premium market automotive niche with desirable products. In 2014, they brought us another one - the first generation version of their fashionable X4 SUV coupe. If you're at all familiar with the Munich maker's model line-up, then you'll get the idea behind this car immediately. In 2008, the company brought us a design they badged as the 'X6', a kind of sportier coupe-like version of their established X5 luxury SUV. Against the odds, the X6 subsequently proved to be a profitable car for the brand, so the same concept was down-sized to create this X4, a sportier coupe-like version of the squarer, more practical MK2 model X3 compact SUV. By the time the first generation X4 arrived in the Autumn of 2014, other brands had already been showing BMW that there was a small, significant group of affluent buyers looking for a sportier, trendier take on the whole mid-sized SUV concept. Some of these had been satisfied with cars like the Range Rover Evoque, while others with deeper pockets had turned to the even more dynamic Porsche Macan. With the X4, BMW had a product that it hoped would appeal in either case. The MK1 model sold until the Spring of 2018 when it was replaced by a second generation version.

What You Getword count: 385

If you don't find the coupe-SUV statement this X4 makes as extreme as that of its larger X6 stablemate, then we'd agree with you. It's been described as the X6's 'attack-dog little brother' and that probably sums it up. While the X6 holds two fingers up to the establishment, this car's approach is mellower and easier on the eye. If you want it to make more of a statement, then you're going to need to buy a car whose original owner resorted to the options list. That said, you'd have to say that there's a cohesion to this car's shape and a purpose to its stance that escapes its bulky bigger sibling. The Munich brand thinks it has 'the sporting elegance of a classical coupe', though it's debateable whether any kind of SUV can ever manage that. Still, it's certainly a design that'll prove popular with those desiring a BMW of this sort but wanting something a bit less staid and suburban than an X3. Slinkier looks though, often lead to practical compromises and you can't help looking at the sweeping rear tail section and wondering about the compromises that might involve for the headroom of rear seat occupants. In the event, there aren't really any to make, though only because BMW has positioned the back seat 28mm closer to the ground than it would be in an X3. It also helps that the ceiling has been gauged out to good effect and that there are reasonable standards of leg and knee room for this class of car. Up-front, the seats are also positioned in a lower, sportier demeanour than they would be in an X3, this time 20mm closer to the deck. Glance around and if you're at all familiar with the M2 version of BMW's more conventional X3 model, you won't find much difference here - which may be a slight disappointment after the avant garde exterior looks. But it all works so well, the main dials in particular a model of clarity. And out back? Well, once the standard automatic tailgate raises slowly open, you'll find that the swept-back styling has slightly reduced the carriage capacity of this car over what you'd get in an X3 - though not by too much, the figure reduced from 550-litres to 500-litres in this X4. 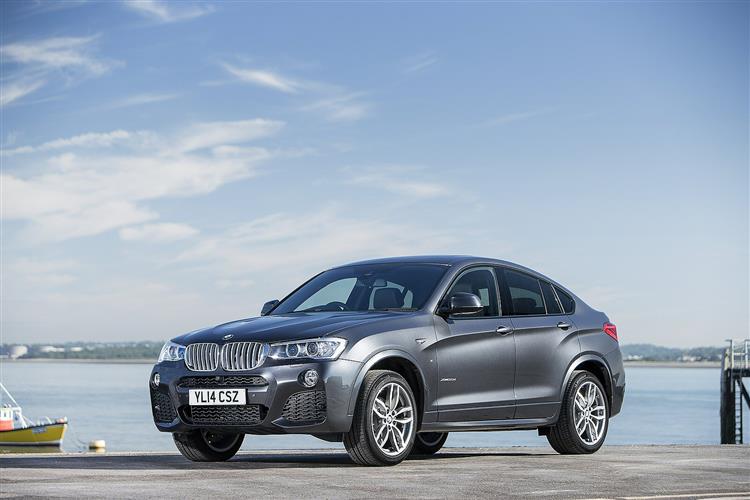