BMW may not have invented the idea of a premium four-door executive coupe but it could certainly be argued that they perfected it with this car, the 6 Series Gran Coupe. Elegant, beautifully finished and impressively efficient, it's one of the key choices on offer if you need something dynamically luxurious with four seats but have out-grown a full-sized Executive saloon and don't want anything limo-like. Here, we look at the cleverer, cleaner and smarter improved version that was launched in 2015. Is it a class leader from this era?

So you want a used luxury saloon. This thing is though, you don't want a boring one. One day perhaps, the time might be right for you to get something like a BMW 7 Series, a Mercedes S-Class or an Audi A8. For now though, you'd like something just as smart and luxurious but more individual and dynamic. Something, perhaps, like this, BMW's 6 Series Gran Coupe, a car you'd ideally choose in its improved post-2015 facelifted form. This Gran Coupe is a lengthened four-door version of BMW's more conventional two-door 6 Series Coupe and was first announced in 2012 to plug an important gap in the Munich maker's luxury line-up. Buyers who'd out-grown the brand's 5 Series Executive saloon and didn't want to go on into something limo-like were being lost to a new breed of more style-conscious Luxury segment models - cars like Mercedes' CLS-Class, Audi's A7 Sportback and Porsche's Panamera. The Bavarians had to do something. This was it: for some, a stylised saloon; for others, a coupe with a little extra versatility. Whatever the perspective, buyers seemed enthused and this Gran Coupe soon became the most popular 6 Series bodystyle, quickly accounting for over half of 6 Series sales. The range gained a powerful M6 flagship variant shortly after launch and was even joined by a smaller stablemate, the 4 Series Gran Coupe, in mid-2014. By early 2015 though, this 'Six' was facing tougher competition from rejuvenated versions of all its main rivals. Hence the need for this improved model with its smarter looks, greater luxury, extra technology and improved efficiency. It sold until early 2018 and wasn't then replaced.

What You Getword count: 316

Not all recent BMW designs have been really elegant - but you might well feel that this one is. Here, we've an executive saloon on a casual dress-down day, a car with all the proportions of a classic Grand Touring coupe, yet most of the spaciousness you'd find in a luxury four-door. From the front, you might mistake any Gran Coupe 6 Series model for one of the conventional two-door variety, but move to the side and you notice not only the extra doors but the fact that this is a much bigger car, the 113mm hike in the wheelbase taking the length of this design over the five-metre barrier that marks out really long cars from the rest. At the wheel, the 6 Series Coupe cabin delivers a subtle difference to the feel you'd get in the brand's more conventional 5 and 7 Series saloons. You sit lower for a start - and there's more of a cockpit-like ambience thanks to the way that the dash curves around you. It's very luxurious too, the leather-trimmed dashboard with its lovely contrast stitching being standard on all models. What's this Gran Coupe model like in the rear? Is it actually anything like as spacious as the back seat would be in a 5 or 7 Series saloon? Initially, you might wonder. To be fair, once you do get inside, it's very comfortable, that extra wheelbase increase doing just enough to make this car a realistic long distance conveyance for two fully-sized rear-seated adults. Finally, a word about luggage space. Raise the trunk lid and you'll find a loading volume of 460-litres on offer here - slightly more than a Panamera but less than an A7 or a CLS. If you need more room, then releasing neat boot sidewall catches flattens the rear seatbacks, a standard feature that can free up as much as 1,265-litres of total space. 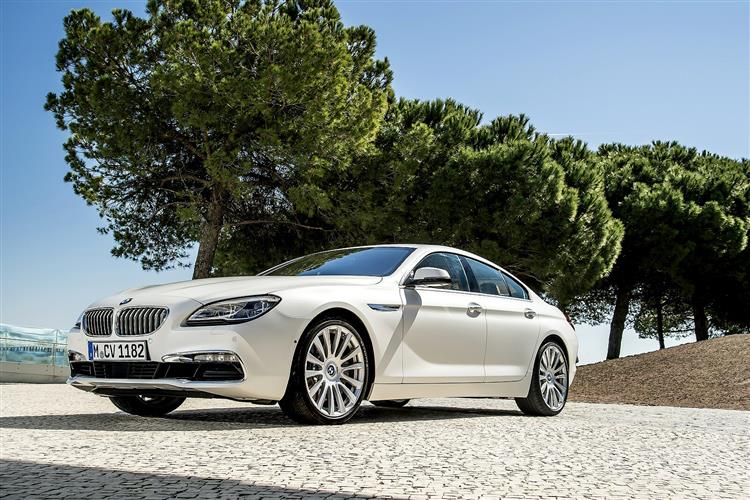