BMW's second generation 6 Series Convertible is a properly desirable luxury GT that's more affordable both to buy and to run than the closest rivals from its era, Mercedes' SL and Jaguar's XK Convertible. This 'F12'-series design may not be an out-and-out sportscar, but back in 2010, it was the finest car of this kind that the Munich marque had yet made.

If every BMW is still to be the 'Ultimate Driving Machine' promised by the advertising, then that slogan must mean many things. Sharp, rewarding handling for most is what this brand is all about but in some market segments, other virtues are just as important. Take up-market large luxury convertibles. Specifically, used ones from the 2011-2018 era. Cars of this sort from this period like Mercedes' SL and Jaguar's XK are all about Grand Touring - fast, stylish cruising, something BMW has more experience in providing than you might expect, with a product heritage in such cars stretching all the way back to the 327 Sports Convertible of the late Thirties. And all the way forward to this car, the second generation 'F12'-series 6 Series Convertible, launched in 2011. The previous 'E64'-series version of this car was a relatively rare sight on British roads - and not only because BMW imported limited numbers. Despite a hefty price tag, it offered performance, rear seat room and boot space all little better than a BMW 3 Series Convertible from the same era costing half as much. The 'E64' open-topped 'Six' was a car that sold on cachet - and that wasn't enough to tempt significant numbers of wealthy buyers from their Mercedes SLs and Jaguar XKs. This second generation model though, proved to be a different proposition. Seriously fast, significantly bigger and sensationally styled, it claimed at launch to be the car to beat in its segment and sold much better than its predecessor. BMW lightly updated the car in 2015 and continued to sell it until early 2018, when it was finally deleted from the company's line-up.

What You Getword count: 617

This 'F12'-series car needed to be bigger, more dynamic and more expensive-looking than its predecessor. It is. Yet despite being 39mm wider and 74mm longer than the old model, designer Nader Faghihzadeh still managed to create a lithe, agile look apparently inspired by the feeling of surging through water. Imagine the movement of waves sent out by the bow of a powerful motorboat and you're supposed to be able to relate the impression to this model's harmoniously curved surfaces, from the long sweeping aluminium bonnet with its distinctive 'shark nose' through muscular wheel arches to the unique 'fins' that mark out the soft top. Yes, it does have a soft top - which might come as a surprise given that the cheaper 3 Series Convertible from this era featured a more expensive folding metal hardtop arrangement. Using that here would have bloated the weight (already around two tonnes), belittled the luggage bay and probably added an ugly rear end, all that roof work having to sit somewhere. So like the Jaguar XK but unlike the Mercedes SL, this 6 Series Convertible has a fabric top, though to be fair, it is a very special one. Multi-layered, acoustically lined and thermally insulated, it's tailored to include special 'fins' which rather neatly, allow the upright, heated glass rear window to be lowered separately from the roof. The roof is also very quick to operate, electrically retracting via a centre console button (or optionally via the keyfob) far quicker than any metal folding system could, in just 19s at speeds of up to 25mph, raising again in 24s if you find that the breeze is a little fresher than you thought, though the low down seating position which reduces buffeting makes this less likely. Cheaper convertibles help combat cooler roof-down conditions with 'airscarf'-type systems that channel warm air below the head restraints into your neck. There's none of that here. Nor do you get the kind of seat belt 'presenters' that hand you your buckle as you get in to save you reaching over your shoulder for it. And while we're nit-picking, rear visibility roof-up isn't great - but then, that's also an issue common to all this car's close rivals. Still, these things apart, the gorgeous interior with its fastidious attention to detail is very difficult to fault and is especially nice if you find a car fitted with the expensive option of a leather finish for the instrument panel that dials the cabin ambiance up a few notches. The cabin design is based around what BMW calls a 'twin cockpit' approach, intended to feel like an upmarket powerboat. The dash is dominated by a large colour screen and the instruments are canted carefully towards the driver, though many of them are recognisable from the brand's cheaper models. To reduce button clutter, most of the functions and features are taken care of by the infamous iDrive system, here much easier to use than it once was, despite many functions and menus. And behind? Well the seats in the back are restricted in size of course but they do benefit from this MK2 model's extra body length to the point where they're significantly bigger than those provided by rivals and perfectly comfortable for children and adults on short journeys. They could be easier to get into with the roof up though, despite an Easy Entry function which electrically slides them back and forward. The boot too, is decently sized for the class at 300 litres with the hood folded and 350 litres with it raised - that's 50% bigger than a Mercedes SL. BMW betrays the target market by letting on that this is enough to hold two golf bags. 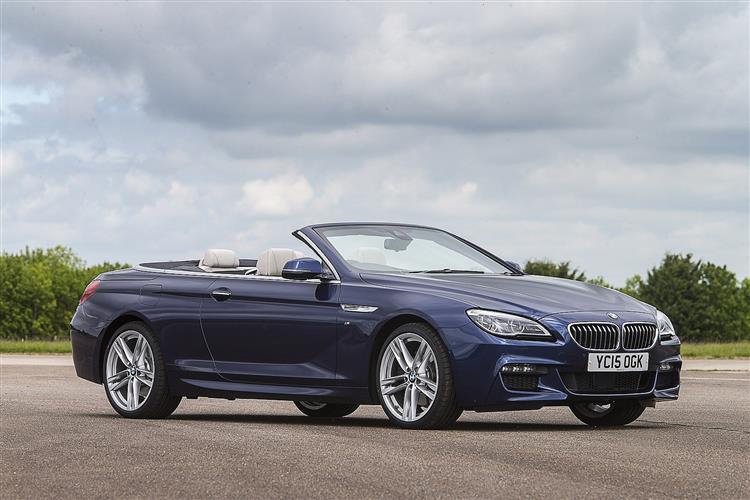