The 3 Series has always been the heart of the BMW brand, traditionally responsible for a quarter of the company's global sales and the benchmark against which every mid-sized premium executive car measures itself. At its original launch in 2012, the sixth generation version set the bar higher still, but key competitors responded in kind, necessitating the arrival of this cleverer, more efficient facelifted version in 2015, complete with a rejuvenated range of engines, cutting-edge technology and the option of all-wheel drive. It's a strong proposition for the used market buyer.

For over four decades, one car has dominated the segment it first invented. BMW's 3 Series established the market for sporting premium mid-sized executive cars way back in 1975 and it's been a benchmark in this sector ever since. Never though, has the competition been stronger, opposition that back in 2015, this much improved sixth generation version had to be good enough to face down. What was needed at this time was more than just a wash 'n brush-up - and we duly got just that. For a start, nearly all the powerplants on offer in this revised model were completely new, some of them real headline-makers. Like the three cylinder MINI-derived engine. The Plug-in Hybrid variant capable of nearly 135mpg. And a diesel engine able to return nearly 75mpg and sub-100g/km CO2 emissions. There was stunning performance on offer too: a six cylinder 335d diesel with almost as much torque as a Lamborghini V12. And a petrol 340i variant boasting the kind of power previously limited to BMW's M3 street-racer. The changes to this updated MK6 model weren't only about performance and efficiency though. There were sharper looks and clever LED headlights, plus this car was the first in its segment to support the much faster data transmission speeds of 4G LTE as part of the class-leading smartphone connectivity that BMW knew its business buyers would want. On top of that, almost countless little tweaks were made in polishing the class-leading handling dynamics, with the classic rear wheel drive configuration joined on selected models by an xDrive 4WD option for those wanting it. On paper then, what was offered here seemed to be a very complete package - and sure enough, it sold well until the car was finally replaced in early 2019.

What You Getword count: 511

The style and aesthetic proportions of a BMW 3 Series are now familiar to almost every business buyer, with classic cues like the kidney grille at the front, the sharp lines of the flanks and the powerful rear end all present and correct. So too the distinctively sculpted long bonnet and set-back passenger compartment, which combine with short front and rear overhangs and a long wheelbase to create the kind of dynamic proportions you'd expect from a BMW. In their own way, all these things are as much a hallmark of this Munich model as its famed perfect 50:50 weight distribution. Aesthetic changes were made to this improved sixth generation model though. Mind you, some of the detail tweaks - the broader side air intakes that smarten this more sculptural front bumper for example - will be difficult to spot unless you happened to own the original version of this car. Perhaps more noticeable are the LED 'eyebrows' that sit above headlights now positioned a little further apart. Take a seat up-front and if you happen to be familiar with the original version of this sixth generation 3 Series model, you might think that relatively little has changed with this post-2015-era revised version. Look at little closer though and it's clear that BMW has poured over the details here, the result being a significant lift in perceived quality - and a classier feel. The dashboard looks smarter and less plasticky and it's harder to find the kind of low-rent, shiny plastics that should have no place on a car of this price. Key areas like the control panel in the centre console are finished in high-gloss black, while chrome accents feature around the air vents, as well as on the re-designed switches provided for window and seat adjustment. You still get a proper old-school handbrake and, as usual, the low-slung driving position perfectly places you in front of a grippy three-spoke leather-trimmed multi-function steering wheel. Through it can be viewed a familiar set of clear analogue dials. Everything else you might need to know has been packed into the many and varied menus of the iDrive infotainment system you view via a 6.5-inch freestanding control screen that sits on top of the dash and is operable via a circular rotary controller below the gearstick. As with direct rivals like Audi's A4 and the Mercedes C-Class, the rear of the cabin will feel rather squashed if it's asked to take three passengers, partly because the rear wheel drive layout means you have to have a hefty central transmission tunnel. As for the boot, well it's 480-litres in size - the same as you'd get in a Mercedes C-Class or an Audi A4 but around 25-litres more than is offered by a rival Jaguar XE. A folding rear backrest was optional for original buyers. Of course, if you're regularly going to be carrying bulkier cargo, you'll be wanting to find an example of the Touring estate model, which offers 495-litres with all the seats in place and 1,500-litres with the rear bench folded. 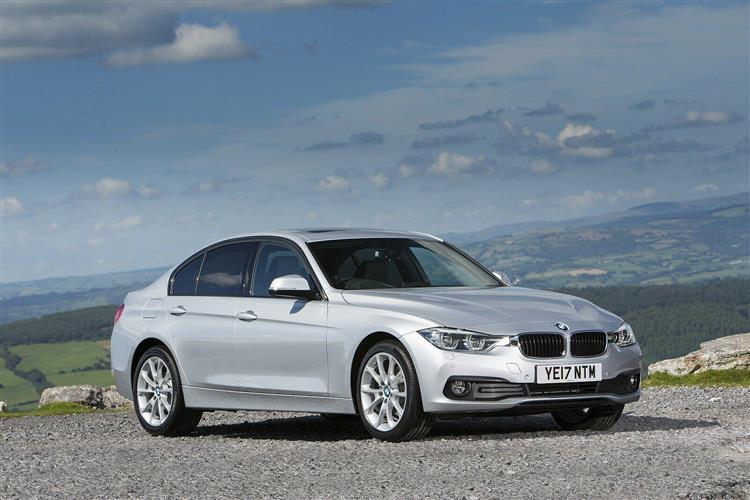