In third generation form, BMW's X5 proved to be a luxury 4x4 that was bigger, safer, classier and came with a blend of performance and efficiency that some of its rivals could only wonder at. A 2WD option made the range a little more accessible and there were a whole series of dynamic suspension packages for those prioritising tarmac over tundra. The result was a car that, though no longer head and shoulders above the competition, could still set the standard most of them needed to aspire to. Let' check out this 'F15'-series model as a used buy.

The BMW X5. It was the car that, back at the turn of the century, completely changed the way we thought about large, plush 4x4s. The car that, more than any other, defined the modern luxury SUV and the one that since the turn of the century, almost every other prestige brand has sought to copy. Without this Munich model, we probably wouldn't have Porsche Cayennes, Range Rover Sports, Volkswagen Touaregs, Audi Q7s or any of the other copycat offerings that now populate the premium SUV sector. And seek to steal sales from the car we're going to look at here, the third generation 'F15'-series X5 launched late in 2013. BMW doesn't actually like the term 'SUV' with its clunky connotations and has always marketed this car as an 'SAV' or 'Sports Activity Vehicle', though the tag never really caught on. It was justified though when applied to the original 1999 'E53'-generation model, introduced at a time when the 4x4 class was mainly populated by big, ladder-frame chassis vehicles that looked more at home on a farm. By the time the MK2 'E70' model arrived in 2007 though, the segment looked very different, so it was just as well that in this form, the X5 had become larger, smarter and more efficient. Good enough in fact to boost global sales over 1.3 million mark and push the Munich maker's total X5 profits up towards £20 billion. As you'd expect, this third generation 'F15' version moved the game on a little further again, offering what BMW claimed was the best combination of performance and efficiency in its class. It sold only until 2018, when it was replaced by an all-new 'G05'-series MK4 X5 design.

What You Getword count: 673

BMW calls the look of this car 'deliberately evolutionary', which we think means that it was styled so as not to alienate existing buyers. It didn't because a whole range of familiar X5 design cues were present and correct. So buyers got short front overhangs, a long wheelbase, upright A-pillars and the familiar BMW kidney grille set between twin circular headlamps that stretch well into the side panels. Whether the finished confection is as pretty as its predecessor is another question. Designer Olivier Heilmer had to make this car bigger and stretch the nose to incorporate a pedestrian-friendly pyrotechnic bonnet - and struggled to do so whilst keeping the handsome silhouette that so characterised the stylish second generation version. Still, you're certainly not going to mistake this X5 for a Mercedes or an Audi when it appears in your rear view mirror. In other words, if not especially pretty, it's certainly distinctive. And yes, still classy. There are certainly some nice detail touches, notably what BMW calls 'Air Curtains', drag-reducing vertical apertures that guide inflowing air around the wheel arches to create a curtain of air over the wheels that then makes a controlled escape through 'Air Breathers' on the side panels. From the upper edge of these Breathers extends a character line that combines with a familiar BMW side profile crease that rises from the headlamp units through the door pulls and on to the rear lights. At the back, there's more careful penmanship. So-called 'Aero Blades' channel air around the roof spoiler, while horizontal lines across the tailgate and around the rear apron are there to try and emphasise the width and robust stance of the car. Plus there are thin, three-dimensional LED light strips in the two-section L-shaped rear lamps that create a striking night time look. Whether all this really works is something we could discuss at length. What isn't up for debate is the style, quality and sheer class of the cabin. The previous generation model was already very nice to sit in but here, things feel more up-market still, with some lovely use of leather and very high quality plastics. It's not as muted and deliberately under-styled as an Audi, nor as brash and in-your-face as rival Mercedes models. Instead, it plots a middle way that, for us, hits the mark perfectly. Fit and finish are virtually faultless. You sit lower than you would in some other SUVs, which accentuates the sportier feel, gripping a lovely tactile wheel through which you glance instrumentation that's a model of class and clarity. The centrepiece of the dash is a vast 10.2-inch infotainment display screen, which is marshalled by the much-improved iDrive control system, here as intuitive and smart as you could ever want it to be. Move to the second row seats and, if you owned a second generation X5, you'll be the first to appreciate the extra space here on offer. This design's more upright glazed area gives it a more spacious and airy feel at the back. It'll be even more pleasant if you've got a car whose original owner specified the optional reclining 'Comfort' seats. On all X5s, leg and shoulder room are both much better thanks to increases of 22cm and 10cm in the length and width of this MK3 model. Around 40% of original buyers specified the optional third row seating. These extra chairs are still only really intended for children, folding away into the load compartment floor when not in use. Talking of the load compartment, a remotely operable powered tailgate was standard, though it's only the top part of this split two-section hatch you can automatically raise or lower. Inside the boot, luggage space rose by 30-litres with this generation model to 650-litres. That's a little less than a Mercedes M-Class or a Range Rover Sport from this era but it's probably enough for most owners. If not, a versatile 40:20:40 split-folding rear bench allows further load capacity to be released in stages all the way up to as much as 1,870-litres. 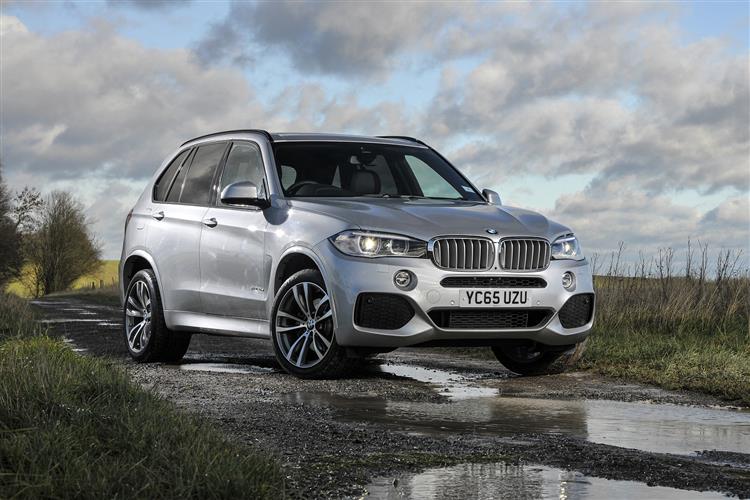