THE ONE TO HAVE? (some text hidden)

If the compact family hatch you really want needs an extra touch of class, it probably needs a smart badge on the bonnet. If that's the kind of car you're looking at and you want a premium model from the 2015-2018 period, the facelifted version of BMW's second generation 1 Series model is a car that deserves your attention, this F20/F21-series design rejuvenated in 2015 with sleeker styling, a smarter cabin, extra technology and a range of more powerful, yet more efficient engines. A wide range of models offer everything from three cylinder frugality to storming six cylinder power and the option of all-wheel drive. It's a strong contender.

This 1 Series model may represent the lowest rung of the BMW ownership ladder but it continues to encapsulate everything that buyers love about the brand. The Munich maker reckons that proof of this was delivered in 2015 by this improved version of the second generation F20/F21-series design. BMW is a company that has always done things differently, a refreshing trait in a sea of automotive sameness. The Bavarian brand's reputation as the purveyor of 'The Ultimate Driving Machine' was built around rear wheel drive and that famed perfect 50/50 weight distribution, cornerstones that were put to the test earlier this century when the time came at last to develop a compact hatch to slot in below their all-conquering 3 Series. Compact hatches are packaged so tightly that they can only really be front-driven - or at least that's what everybody thought until BMW brought out the very first 1 Series model in 2004, that E81/E82/E87/E88-series design pioneering rear wheel drive in this segment. Compact hatches are usually also fairly predictably styled, a concept that original 1 Series design also turned on its head with its unique, unconventional looks that offered a real alternative to cars like Audi's A3 and the Mercedes' A-Class. Both these unique selling points were retained when, with 2.2 million global sales on the board, the time came to launch the original version of this car, the F20/F21 model second generation 1 Series, which gained 'Sports Hatch' branding and was originally introduced here in the Autumn of 2011. This design was a big improvement - and needed to be to face down the challenge of all-new versions of key rivals like Audi's A3 and the Mercedes A-Class. The looks, though still individual, got a sleeker finish and extra room was freed up in what had previously been a rather cramped rear cabin. Time moves on though and by 2015, both these two key competitors had seriously upped their game, especially in the areas of efficiency and connectivity. Other models had also emerged to challenge German brand dominance in the premium compact hatch segment, a sector that by now was offering increasingly credible contenders like Volvo's V40 and the Lexus CT200h. It was for all these reasons that a rejuvenated version of this second generation 1 Series Sports Hatch model was needed - and delivered - in the Spring of 2015. By then, BMW was able to give this car access to the frugal three cylinder petrol and diesel engines it had developed for the third generation MINI Hatch. Plus there was the chance for BMW's clever 'ConnectedDrive' suite of hi-tech infotainment and media services to filter down into 1 Series ownership, offering the kind of cutting-edge connectivity previously restricted to the brand's very priciest models. The idea was that offering buyers all of this, along with smarter looks and a higher quality cabin, would re-establish this car as a definitive choice in its segment. Here, we check out these facelifted F20/F21-series model for used buyers. They sold until the third generation front-driven 1 Series model was launched in the Autumn of 2019.

What You Getword count: 295

Taking any compact car and making it rear wheel driven will always mean an inevitable set of constraints when it comes to styling and packaging. For such a layout, you'll need a longitudinally mounted engine - so a long bonnet. And a driveshaft running to the rear axle - which will compromise rear cabin space. Even given the need for all of this, the original first generation 1 Series model [E81/E82/E87/E88] was still an unusual-looking thing and had rear seat space poorer than some two-door coupes. In 2011, both issues were certainly improved by this second generation F20/F21 design, a car longer and wider than its predecessor, with a more mature, grown-up feel that was further developed by this revised version. The changes made are most obvious at the front, where a smarter lower apron with larger air intakes and a horizontal bar combines with sleeker headlamps featuring LED daytime driving lights. Inside up-front, BMW sought to move this car a little more up-market. There are nicer materials on show than in the pre-facelift F20/F21 cars, along with smarter seat fabrics, a gloss black finish to the centre dash and extra chrome accents around the air vents, the stereo and the climate controls. What else? Well as usual, the low-slung driving position perfectly places you in front of a grippy three-spoke leather-trimmed multi-function steering wheel through which can be viewed a familiar pair of clear analogue dials. Not so good is rearward visibility thanks to the rather narrow rear screen. Rear seat room is at a premium thanks to the rear wheel drive format, though obviously you'll be better off with the F21 5-door version than the F20 3-door. The boot is 360-litres in size, regardless of your choice between three or five-door body styles. 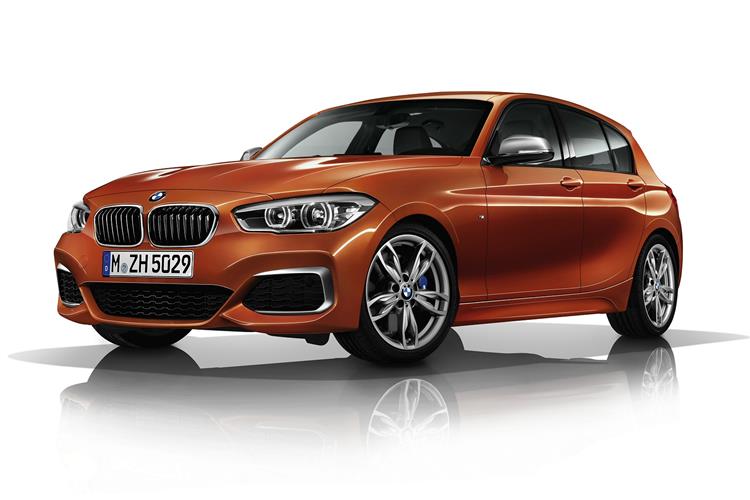