4 TO THE FORE (some text hidden)

By 2017, the first generation version of BMW's 4 Series Coupe was facing newer rivals in the mid-sized sports coupe segment but it was up for the fight, especially in this usefully revised facelifted guise. The rear-driven handling dynamics remained class-leading and were usefully improved as part of the car's mid-term update. Plus they were matched to extra technology and a more powerful road presence. Potentially, this is everything you'd want in a car of this kind from this era.

Launched in 2013, the 4 Series Coupe, in contrast to its 3 Series Coupe predecessor, was intended to be far more of a stand-alone model. Even though under the skin, it still shared pretty much everything that made its less stylish but more practical showroom stablemate, the 'F30' generation 3 Series saloon, such a brilliant car. BMW launched this model to better target the threat posed by Coupe versions of Audi's A5 and Mercedes' C-Class. A Convertible version was launched in 2014 and a five-door Gran Coupe 4 Series model followed a year later. BMW upgraded the petrol engine line-up in 2016, then facelifted the range in the Spring of 2017. It's the post-20217 facelift Coupe model we're going to look at here as a used car buy. This is the sort of car BMW has always done very well, a mid-sized rear-driven performance-orientated coupe with perfect weight distribution and a purposeful demeanour. It all made plenty of sense when the Munich maker first launched this 4 Series Coupe model back in 2013 - which meant that this improved facelifted version was even more appealing. This was the car that replaced several generations of BMW's 3 Series Coupe and subsequently appeared in two other bodystyles - a Convertible and a stylised five-door hatch, the 4 Series Gran Coupe. Both these variants shared the changes made in mid-2017 to this two-door version, updates needed to keep this car competitive in the face of tougher competition from direct Mercedes and Audi rivals. These two competing brands had really upped their game in the mid-sized executive coupe segment by 2017, Mercedes launching a second generation C-Class Coupe in 2015 and Audi following up with a MK2 model version of its A5 Coupe a year later. In response, this 4 Series got revised styling, an upgraded cabin, extra technology and an improved specification. Perhaps more significantly, there were dynamic changes too - a much more responsive steering system and a revamped suspension set-up that was said to enhance this car's handling capability without damaging its ride comfort. In this form, this car sold until mid-2020 when a second generation model was launched.

What You Getword count: 422

This two-door 4 Series has all the predictable BMW coupe design elements we've seen so often over the years - the short overhangs, the long bonnet, the set-back passenger compartment, the shallow frameless side windows leading into the signature Hofmeister kink on each C-pillar and a flowing roofline that offers up a low, stretched silhouette. It's a true sportscar profile that's here been. re-interpreted a little. You won't really appreciate just how much unless you happen to be super-familiar with the original pre-2017 version of this car, but just in case you are, we'll cover off the changes, most of which are found at the front. The unbroken central air intake is the main visual update, featuring an aperture that increases in size towards the outer edges, lending, BMW hoped, a more imposing presence to the nose section. Inside, as with obvious rivals, you're treated to one of those 'belt butlers', an electrically-extending arm that (rather slowly) hands you your belt buckle once you get in. The driving position's lower-set than it would be in the kind of more ordinary 3 Series model that shares most of its engineering with this car. And you get a re-designed leather-wrapped sports steering wheel that feels great to hold. The level of infotainment on offer was upgraded in this facelifted model, though still not to the point where the high-mounted centre-dash screen could be touch-sensitive. Standard models come with a 6.5-inch monitor, but most original owners upgraded to the larger 8.8-inch display that's standard with the more capable 'BMW Professional' media package. Getting into the back isn't the easiest task in the world and once you're snuggled in there, you'll find a slightly strange combination of decent legroom but rather pinched headroom. The extra 50mm of wheelbase this car enjoys over its 3 Series Coupe predecessor really tells here, freeing up 13mm more stretching room for your lower limbs. Unfortunately, the lowering of the roofline by 16mm that was necessary to achieve those slinky looks will see taller folk grazing their scalps on the headlining. Still, assuming they're not sat behind a couple of basketball players, most adults will be fine in the back on all but the longest trips. There'll be reasonable room for their luggage too. Once open, the boot reveals a large but shallow 445-litre space that probably does quite well to get within a whisker of the cargo capacity of slightly frumpier-looking rivals. BMW insisted on charging extra for a split-folding rear bench from new, but most original buyers specified that. 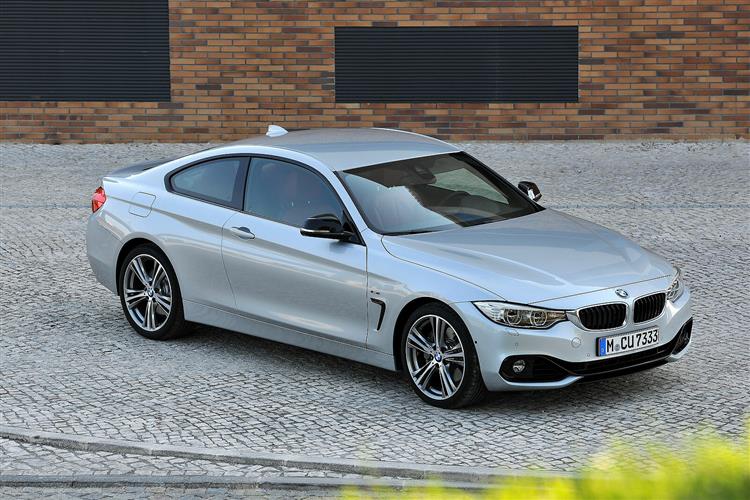