All commercial vehicles claim to be tough and workmanlike, but here's one that can hardly be anything but. The IVECO Daily's heavy commercial ancestry gives it a capable, unbreakable feel that sets it apart in the big Transit-class market for large LCVs. Now that the Italian brand has also matched this with more efficient engines and a smarter, more car-like cabin, the Daily can appeal to a wider cross-section of business buyers than ever before.

Want a job doing properly? Then call in a specialist. It's a maxim that most business people apply to every area of their activities - except when it comes to buying a van. They'll normally select one from a brand primarily focused on selling cars, a maker with technology stretched to also include a few LCVs in its line-up. IVECO has a rather different approach. Not only does the Italian brand only make commercial vehicles but their speciality is in rather large ones. Which means that when a brand like this turns its attention to creating a van, you can expect truck toughness, business focus and a set of wheels purpose-built for the job in hand. You can, in short, expect something like this, the IVECO Daily. And the facts fit the marketing rhetoric. In an LCV market where vans are increasingly car-derived, the Daily's different, with a truck-derived chassis of unrivalled strength, versatility and durability. Which is why it was the first vehicle in its class to offer a load volume of as much as 17.2m3 and a gross vehicle weight as heavy as 7 tonnes. As a result, this Daily may reckon itself to be tougher than its large Transit-class rivals but it's also traditionally been seen as utilitarian and inefficient beneath the bonnet. IVECO takes issue with this and claims to have proved its point by creating a version of this van that's smart as well as strong, tactile as well as tough, frugal as well as fit for purpose. Let's put it to the test.

Truck-like toughness sounds good on the balance sheet, but doesn't hold much appeal if it comes with a van you've to drive long distances in or hurry through a set of twisties on the way to a short notice appointment. So how will this Daily van fare given its truck-tailored underpinnings? Better than I was expecting it to if I'm honest. Thanks to a high seating position and monster wing mirrors, it's an easy van to drive, especially round town where the light steering facilitates a tight 11.5m kerb-to-kerb turning circle (or 12.4m wall-to-wall). And under the bonnet? Well, most Daily customers will opt for the 2.3-litre F1A diesel option, offered with power ratings ranging between 116 to 156hp. Enough to tow a braked trailer of between 2800kg and 3500kgs, depending on the variant you choose. Not enough for the job in hand? Then you'll need the 3.0-litre heavy duty F1C Common Rail diesel, with outputs ranging between 160 and 210hp. There's also a battery-only all-electric model and a clever 'Natural Power' CNG variant. This features a 3.0-litre 136bhp engine tuned for methane power but able to run on ordinary petrol if you need it to. Transmission choice is between five and six-speed manual 'boxes or a 6-speed Agile semi-automatic transmission for urban-based users. Ride quality will depend to a great extent upon your choice between three different suspension systems which can be hung from the rear axle - parabolic, semi-elliptical and air. Recent camera safety feature additions include autonomous braking (IVECO's 'Advanced Emergency Braking' and 'City Brake PRO' set-ups). Plus there's Adaptive Cruise Control, which can be combined with a 'Queue Assist' system which helps the van drive itself in urban traffic. Highway use is aided by 'ProActive Lane Keeping Assist' and 'Crosswind Assist'. 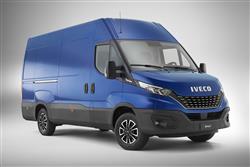 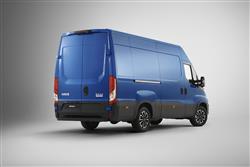 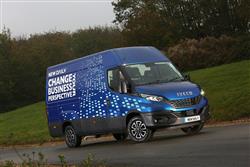 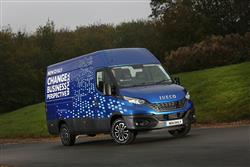 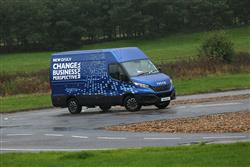 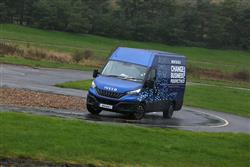 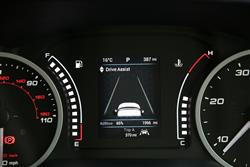 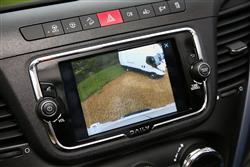