The banzai Lexus RC F is a coupe that makes rivals like the BMW M4 and the Mercedes-AMG C63 seem almost straight-laced. Jonathan Crouch looks at the improved version.

The improved Lexus RC F crashes the sports coupe party with more focused race-derived drive dynamics. As before, a 5.0-litre 450bhp V8 does the honours beneath the bonnet. Front engine, rear wheel drive and a big normally-aspirated engine is a classic recipe and Lexus matches this with sublime build quality and a humungous equipment list.

The Lexus RC F is based on the brand's RC Coupe, a car primarily targeted at American tastes but also developed for Europe with smaller, more efficient turbocharged power. That kind of engine is the sort of thing buyers now expect even in the most potent real-world performance cars: it's certainly what's delivered by the most direct rival this RC F must face, BMW's M4. Lexus though, doesn't simply copy the Germans anymore and instead, has simply uprated the old IS F's normally aspirated old-school V8 for this model - though pared it with a quite astonishing array of driver technology. It all leaves us posing this car a whole series of searching questions. Have we here the sort of engine still relevant in the modern world? And if it is, are buyers now ready to take Lexus seriously as a manufacturer of top-drawer sports cars? It's time to find out.

Buckle up, because the RC F's specifications sound fantastic. This improved RC F coupe benefits from changes to boost its performance. Reducing weight was a key target, without diminishing the car's feeling of refinement and solidity. The details are small, but telling, including the use of hollow half-shafts in place of solid components, a slimmer intake manifold and a smaller air conditioning compressor. More kilogrammes have been saved by using aluminium for a number of suspension parts, while maintaining overall stiffness. To gain a more refined feel, stiffer bushings have been added to the suspension arms and steering rack mounts, while the use of more rigid engine mounts helps the RC F better exploit the power of its normally aspirated 5.0-litre V8 engine. The engine maintains its maximum power output of 457bhp and maximum torque of 520Nm, with a revised intake routing and lower rpm trigger point for the second intake opening. The established eight-speed automatic transmission is retained, but with a higher final drive ratio for improved off-the-line response. To secure the sharpest acceleration from a standing start, a redesign electronic launch control system has been added. This automatically adjusts the traction and throttle control for maximum take-off performance. The driver simply needs to press and hold the brake pedal, then engage the system by pressing a button on the centre console. This enables nought to 62mph to be accomplished in just 4.3 seconds. The RC F further gains new Michelin Pilot Sport 4S tyres, designed specifically for the coupe. These have a unique profile and tread pattern and are made from a special rubber compound. They have been designed to help reduce understeer, improve lateral grip and increase durability in extreme driving conditions. Otherwise, it's as before. The RC F gets standard fitment Brembo brakes, Sachs monotube shock absorbers, an active rear wing and Lexus's Vehicle Dynamics Integrated Management (VDIM) system. The standard Torque-Vectoring differential helps you get the power down through the bends, giving the driver the choice of with three operating modes to optimise traction and vehicle control in different scenarios, from everyday driving to track performance. 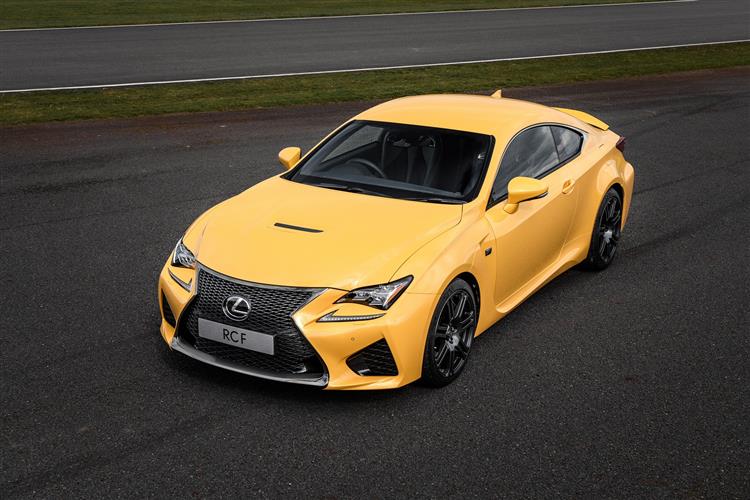