One of Renault's most important models, the Megane, has been significantly updated in a bit to attract customer attention in the Golf and Focus family hatchback segment. Jonathan Crouch takes a look.

Renault's fourth generation Megane family hatchback is now a smarter proposition - in more ways than one. If you're shopping for something Focus or Astra-shaped in this segment, it'll probably no longer be one of the first cars you'll immediately think of, but this improved version of the MK4 model is clever, sensible and very good looking, with extra sophistication inside - and under the bonnet, where E-TECH plug-in hybrid tech is now offered at the top of the range. In short, it might surprise you.

Ordinary family cars can no longer be... well, ordinary. People want polish these days, a smarter feel and hi-tech features that make them feel pampered and premium. Which means that in the Focus-sized family hatchback segment, they may well find themselves looking at models like this one, Renault's rejuvenated fourth generation Megane. With the French maker's position as one of Europe's biggest car makers severely under threat and a slimmed-down range of conventional models forced upon dealers by this brand's commitment to electric power, it's hard to over-state this Megane's importance if you happen to run a showroom with the yellow-backed silver diamond above the door. Hence the efforts Renault has gone to improve it, smartening the look, improving media connectivity and adding in a clever Plug-in hybrid E-TECH variant. All of this is crucial, for in the Golf and Focus family hatchback segment, this Renault has to take on and try and beat some of the very best cars you can buy. Can it? Let's find out.

This fourth generation Megane's switch to a fresh CMF platform helped a lot in improving its dynamic responses but mainstream versions of this car still prioritise lowering your heartbeat rather than raising it. Ride quality is one of this car's most competitive traits. The engine options in the volume part of range are very simple, both four cylinder units: there's either a 1.3-litre petrol powerplant with 140hp. Or a 1.5-litre Blue dCi diesel with 115hp. Both can be had with either 6-speed manual or 7-speed dual clutch auto transmission. Renault also offers an E-TECH plug-in hybrid variant which sees a 1.6-litre petrol engine mated to two electric motors and a multi-mode clutch-less transmission. The system puts out 160hp (around 20hp more than the equivalent plug-in package that Kia offers) and features a 9.8kWh, 400V battery that allows a range of about 30 miles; plus the ability to travel at up to 84mph, on electric power alone. The only other variant in the range beyond this is the Renaultsport R.S. hot hatch, which uses a 1.8-litre turbo petrol unit now uprated to 300hp in standard form, a state of tune previously limited to the track-ready 'Trophy' version (which continues). Again, there's a choice of manual or auto (paddleshift) transmission. With most more ordinary Meganes, you can order the brand's 'Multi-Sense' driving modes system, one of those able to alter steering feel, throttle response, stability control settings and auto gearchange timings to suit the way you want to drive. Heck it even changes the engine note in an effort to put you in a sportier mood. 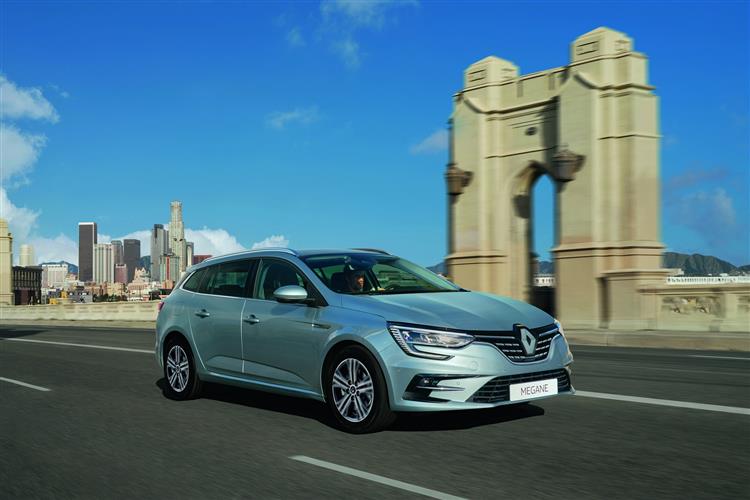