McLaren's 'Sports Series' is a line-up that includes the brand's most affordable models and the flagship in this part of the company's line-up is this car, the 570S. It's the kind of machine you might buy in preference to, say, an Aston Martin or a Porsche 911 Turbo. The experts at Car & Driving check it out..

The 570S coupe engages with a wider audience than McLaren has targeted before, but it serves up a treat at first asking. This car delivers the uncompromising driving experience that the Woking brand promises, moving forward with innovations in comfort and design, ensuring new buyers are afforded McLaren's legendary attention to detail.

In its evolution from Formula 1 team to car manufacturer, McLaren has set out an ambitious three-spoke product strategy. The P1 hypercar and P1 GTR make up the 'Ultimate Series', the 650S and 675LT the 'Super Series' and the 540C and 570S the 'Sports Series'. The barrage of numbers and letters could get confusing but, being McLaren, there is meticulous method amid the mayhem. The numbers in the Sports and Super Series signify the power outputs of each model (in PS units). While the P1 of the Ultimate Series represents 'Pole-Position', in case anyone needs reminding that McLaren is one of the most successful teams in Formula 1 history. The 570S coupe is the range-topper of the Sports Series and with it McLaren have stepped into territory long dominated by Porsche and, more recently, Audi with its impressive R8 V10. It's an important product for McLaren to get exactly right.

McLaren's philosophy revolves around the driving experience, so it's no surprise that the 570S rates highly here. While the models further up the range have an emphasis on track driving, the 570S is more focussed on the real-world use that sports cars endure most of the time. So it has to be comfortable and manageable in the city, yet deeply rewarding when unwinding on country roads. McLaren achieves this with science proven in the crucible of motorsport. It employs an adaptive suspension system, an innovative 'Brake Steer' system which applies gentle braking pressure to the inside wheels when cornering, and a seven-speed paddle-shift gearbox to allow the car to respond instantly to different styles of driving on different types of road. These settings can be tweaked from a control panel between the seats for maximum comfort or optimum road-holding at speed. The 570S coupe's lightweight structure is propelled along the road by a 3.8-litre twin-turbo V8 engine, tuned to deliver 570PS (just over 560bhp) making the car rocket to 62mph in 3.2 seconds, passed 100mph around three seconds later, and on to a top speed of 204mph. These numbers alone put the 570S coupe at the head of its class. 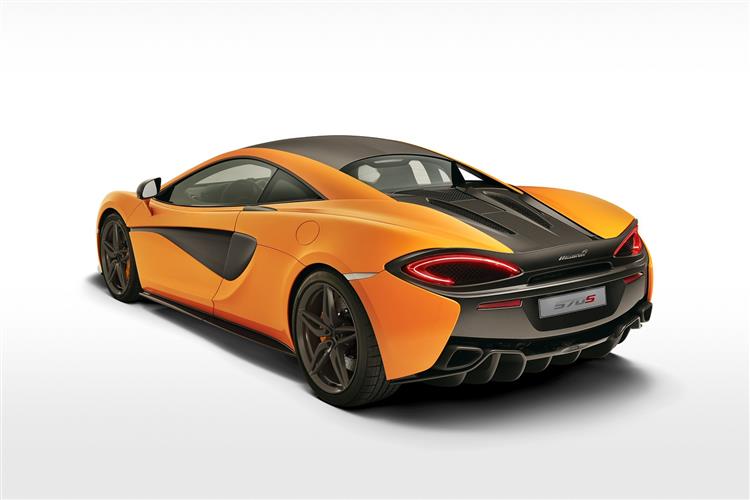