Hyundai got serious about hybrid and electric power with the IONIQ range. Now this model's been improved. Jonathan Crouch checks out what's on offer.

We think that the IONIQ is the most impressive car that Hyundai has yet brought us. Here, one design can offer buyers the choice of parallel hybrid, plug-in hybrid or full-electric motoring - and do so at pricing that significantly undercuts the competition. Plus, as we'll see, it offers some genuine advances over rival eco-models already out there on the market. Now it's been improved and the full-electric version offers a longer 182 mile WLTP-rated range.

When the Koreans do something, they do the job properly. Take hybrid and electric cars. Other brands offer a hybrid. Or a Plug-in Hybrid. Or a full-electric contender. With this IONIQ model, Hyundai is able to offer all three. The most affordable parallel hybrid variant is a Toyota Prius rival, the full-electric model is primarily up against the Nissan LEAF and the Plug-in hybrid version is there to take on cars like Volkswagen's Golf GTE and the Plug-in version of the MINI Countryman. It's quite a product offensive. It's even more impressive to note that Hyundai hasn't just copied its rivals but improved upon them. The parallel hybrid variant, for example, has a combined power output of 139bhp; compare that to the 122bhp figure you get in that rival Toyota Prius. Meanwhile, the full-electric version now has a WLTP-rated operating range of 182 miles.

The parallel hybrid version that most will choose features a 104bhp 1.6-litre Kappa petrol unit that the Koreans say boasts 40% thermal efficiency; apparently, that's very good. It works with an electric motor situated under the rear seats, that powered by a 1.56kWh battery. The combined hybrid system puts out 139bhp, 17bhp more than a Prius. The IONIQ also delivers its performance more smoothly than a Prius too. There's the automatic gearbox that all hybrids of this sort have to have, but in this case, it's a modern DCT dual-clutch affair, rather than the jerky belt-driven CVT auto unit that Toyota persists with. In an IONIQ Plug-in, there's obviously much more potential for extended full-electric use, thanks to the greater capacity of a considerably larger 8.9kWh battery that drives a pokier 61PS electric motor. Despite that, total system output remains pegged at 141PS, so ultimate performance is pretty much the same as it is with the ordinary Hybrid variant. The final option is the full-Electric IONIQ model, which uses a 120PS electric motor powered by an upgraded 38.3kWh battery capable of a WLTP-rated 182 mile driving range. Whatever IONIQ derivative you choose, on the road, you won't be expecting any handling fireworks - but that's not the point of this kind of car. The ride is good though, as this Hyundai gets an advanced multi-link rear suspension system - or at least the hybrid versions do; the full-EV model has a simpler set-up to free up bootspace. Talking of the full-EV model, its party piece is an impressively long operating range by battery class standards. Hyundai reckons this car will go nearly 20% further on a charge than a comparable Nissan LEAF. 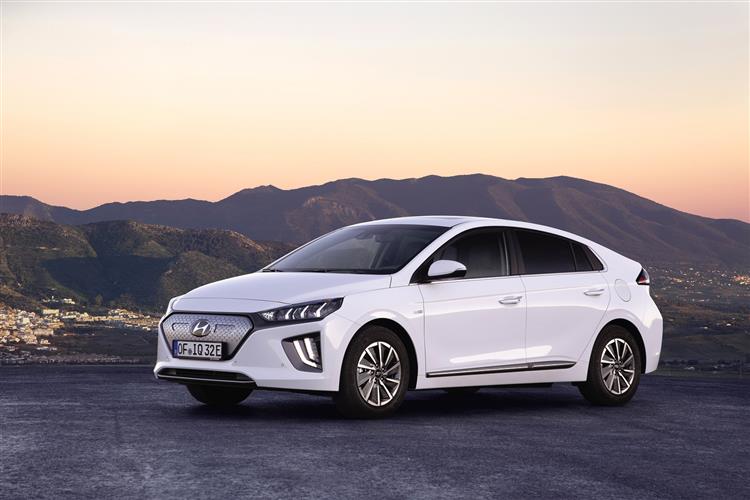