Tesla says that their all-electric Model X is an SUV that comes with almost none of the usual SUV compromises. Sounds intriguing. Jonathan Crouch drives it.

Tesla reckons that its all-electric Model X is the safest, fastest and most capable sport utility vehicle in history. With all-wheel drive and battery options that can give you well over 300 miles of range, the Model X has ample seating for seven adults and all of their gear. And it can be almost ludicrously fast too. It's a pretty unique proposition.

Tesla is changing the way we think about electric cars. It's a process that started back in 2012 with their first vehicle, the Model S, a luxury executive-class contender that went far further on a full charge than any other full-electric car of the period. The brand's second design, this Model X, will also shake things up, an SUV that has none of the downsides that you'd think would go along with SUV ownership. Assuming you can afford the high upfront asking price - or more likely, the plump monthly leasing figures - it's super-cheap to run and, depending on the variant you choose, can go 300 miles or more between charges. Four wheel drive is standard and depending on how you specify your car, you can seat up to seven people. In future, it will even be able to drive itself. If you're looking for automotive state of the art, you'll find it right here.

Whatever Model X variant you choose, you'll get four-wheel drive, courtesy of a pair of electric motors, one powering the rear wheels and one for the front pair. The brand has now standarised 100kWh battery power. In the standard Dual Motor All-Wheel Drive variant you get a 348 mile WLTP driving range. Alternatively, in the top Tri Motor All-Wheel Drive Model X Plaid, there's a 333 mile driving range and a huge boost in power that makes this variant capable of rest to 60mph in just 2.5s on the way to 163mph flat out. The driving experience of this Model X is unlike that of any other large SUV. For starters, it's a pure electric vehicle, so there's no noise from an internal combustion engine to deal with, only the distant hum of the two electric motors. That makes this an astonishingly refined means of travel, with comfort levels embellished by the standard air suspension system which is able to adjust the ride height through either manual or automatic means. The car lowers itself at speed on the highway but can be raised for low speed work over poorer surfaces - though it's not really designed for any sort of 'off piste' terrain, despite the standard fitment of All-Wheel Drive across the range. On the move, you'll be impressed by the easy seamless way this Model X gains its speed, though the acceleration does tail off noticeably at higher speeds. The regenerative brakes take some getting used to: come off the throttle and it's as if you've pressed the brake. What this means is that most of the time, you won't need to use the brakes at all. 'Smart Air Suspension' is standard but many still seem to find the ride quality quite firm. Like all electric vehicles, weight is an issue - a Model X weighs in at nearly 2.5-tonnes - but Tesla has minimised the effect of this by centrally mounting all that mass beneath the cabin floor, this approach giving the car an impressively low centre of gravity. As a result, there's less bodyroll through tighter turns than you might expect and there might even be some fun to be had were it not for the rather lifeless steering. 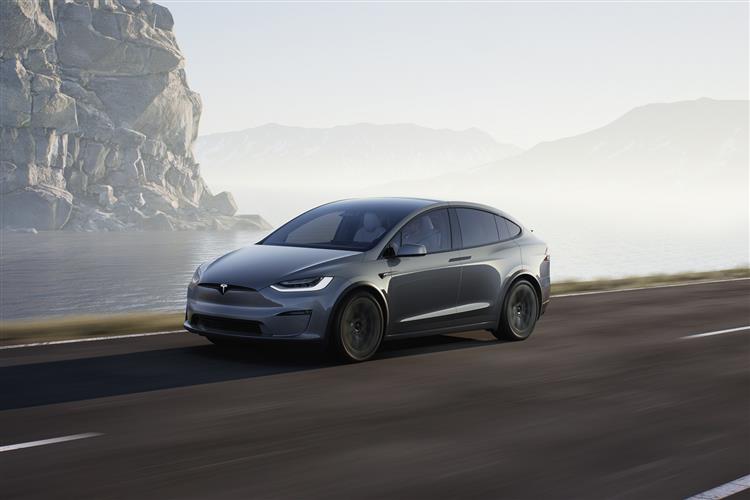