Hyundai believes that the market-leading Nissan LEAF has had its own way for far too long in the affordable part of the slowly growing full-electric car segment. They've aimed this full-Electric IONIQ model directly at that car, as well as at other more recently introduced key segment models like the Volkswagen ID.3. On paper at least, this car certainly seems to offer a package that eco-minded buyers in this class will want to consider. Especially in this revised form, where a larger 38.3 kWh battery features to extend the WLTP-rated driving range to 182 miles.

Once upon a time, Hyundai built simple, cheap, budget brand cars. Now, it makes models like this one, the IONIQ, which was the world's first vehicle to offer the choice of three electrified powertrains. We're looking here at the IONIQ Electric. It's the full-battery-powered version of a design also available in our market with Hybrid and Plug-in Hybrid power - and it's very advanced indeed, especially in this improved form. But then, maybe we should have expected that. Back in 2015, Hyundai was the very first automotive maker to launch and sell a hydrogen-powered vehicle, the ix35 Fuel Cell, and in the same year, its brand partner Kia introduced an all-electric EV version of its Soul small Crossover model, showing that the Korean conglomerate had mastered battery power too. How has it done here? Let's find out.

Hyundai's first ever stab at this market was originally launched with a 28kWh battery but now it gets a gutsier 38.3kWh battery; that's important because the driving range of this car in its original form wasn't especially competitive against some rivals. Now, WLTP-rated at 182 miles, it's bettered in the class only by the BMW i3. Inevitably, the need for a battery three times the size of the one in the IONIQ Plug-in model mated to a much larger 120PS electric motor means extra weight, the kerbside figure rising by 50kgs. In fact though, because all the bulk is mounted so low down in the car, that has a positive, rather than a negative effect on driveability, reducing the bodyroll that troubles the Hybrid models at speed through tight bends. Hyundai proudly points out that an Electric IONIQ model has a lower centre of gravity than a Volkswagen Golf GTI - which is appropriate because the frantic acceleration you initially get from rest in this variant is very hot hatch-like: the 62mph point still flashes by in a fraction under 10s. Switchable drive modes give you the choice of 'Eco', 'Normal' and 'Sport' settings. There isn't a gear lever in the full-Electric variant - of course the single-speed transmission doesn't really need one. Instead, small 'Park', 'Neutral', 'Drive' and 'Reverse' buttons are provided, along with what will initially appear to be gearchange paddles behind the steering wheel, which are actually there to allow you to vary the level of regenerative braking. 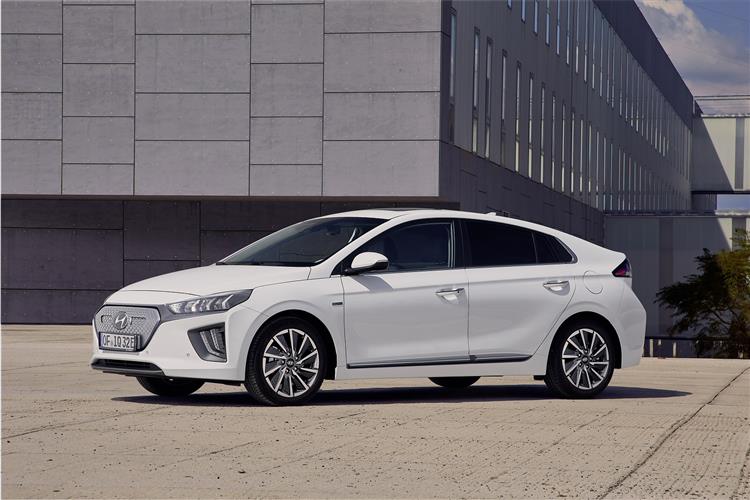